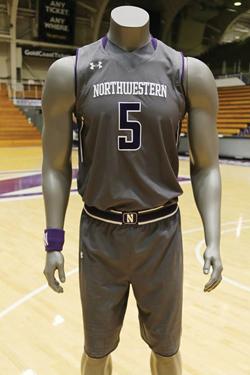 Northwestern’s unveiled its new gray alternate uniforms Thursday. The Wildcats plan to debut the uniforms at home against Penn State on February 21.

It was a tough night for the Wildcats on the basketball court Thursday, with a 69-67 home defeat to Ohio State that gave Northwestern its fourth consecutive single-digits loss.

But the team can find some solace in an announcement made on its apparel.

The pictures were accompanied by a post stating that these jerseys were “tentatively slated to debut” at Welsh-Ryan Arena for the Cats’ Feb. 21 home contest against Penn State.

The jerseys and shorts are gray with a purple waistline and purple underlining around the shoulders and neck. The front jersey number is purple with a white outline with “Northwestern” displayed above in white.

The HeatGear ArmourVent uniforms are part of the University’s deal with Under Armour.

This is not NU’s first foray into gray uniforms, but it is perhaps its tamest iteration.

In 2013, the football team unveiled special gray uniforms with an American flag theme on the helmet and shoulder pads to promote the Wounded Warrior Project. The attire quickly garnered controversy, as streaks of red on the jersey were construed as splotches of blood in some circles.

The basketball team followed with its own, less controversial gray jerseys in January 2014. The jerseys had a similar top design to Thursday’s new uniforms, but the shorts were far more detailed, with the Chicago skyline among the number of things printed on the bottom half.