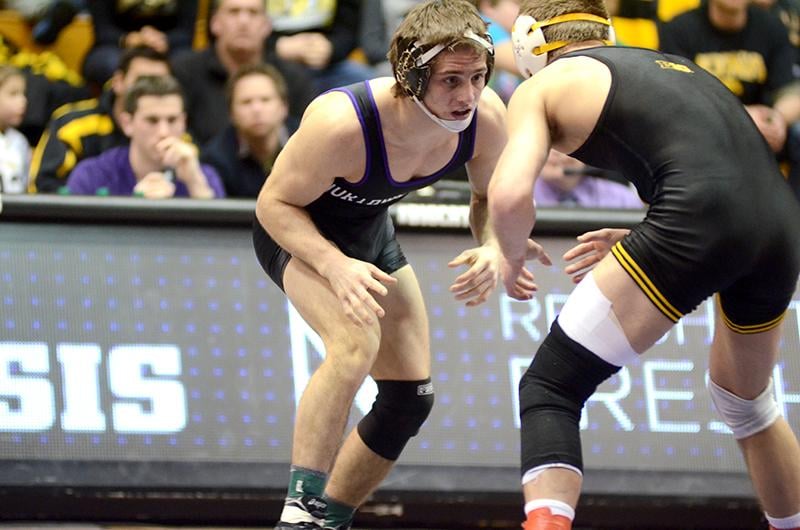 Jason Tsirtsis squares off against his Iowa opponent. The freshman, who is ranked No. 4 in his weight class, won by major decision Sunday against Stanford to improve to 22-3 on the season.

“At Iowa, the fans, when you start beating them, they boo you,” coach Drew Pariano said. “We want to get booed a lot.”

Carver-Hawkeye Arena, Iowa’s 15,000-seat stadium, is the most hostile environment in the country to wrestle in, Pariano said. Hawkeye fans are known for being especially passionate, packing the stands and making their voices heard.

“It’s a crazy atmosphere,” senior Pierce Harger said. “The people in Iowa love wrestling, and it’s loud in there. They bring the fans. Half the time they don’t even care who’s on the mat, as long as it’s a lot of action.”

The Hawkeyes’ wrestlers aren’t any less formidable than their home atmosphere, as Iowa has a ranked wrestler in every single weight class. Key matchups for NU on Friday include junior Jameson Oster vs. No. 6 Josh Dziewa at 141 pounds, No. 1 sophomore Jason Tsirtsis vs. No. 3 Brandon Sorensen at 149, No. 6 Harger vs. No. 9 Nick Moore at 165, No. 13 senior Alex Polizzi vs. No. 4 Nathan Burak at 197 and the most anticipated bout, No. 4 Mike McMullan vs. No. 1 Bobby Telford at heavyweight.

McMullan has already faced Telford once this season in the finals of the Midlands Championships, losing 4-2.

“Telford’s ranked No. 1 right now, and we want to take that from him,” Pariano said. “(McMullan and Telford) go way back, all the way back to high school. It’s been a back-and-forth series, but we feel good about that match. Mike’s training hard, and we’re gonna peak at the right time.”

Harger, meanwhile, topped Moore 8-5 in the Midlands Championships semifinals. He’s coming off a memorable weekend, with a technical fall and a fall.

“The reason that I was successful this past weekend was because I had a good week of practice the week before, so that’s the game plan again for this week,” he said.

“Pierce is wrestling extremely well right now,” he said. “If anything, they should be the ones that are worried, and we should just go out there and wrestle our style.”

But Pariano said if the Cats really want a chance of winning the dual, they need a strong performance at 141 pounds from Oster, who is “firing on all cylinders right now.”

After Iowa, NU has a quick turnaround, returning home to take on the Fighting Illini just two days later. Pariano said he especially expects Tsirtsis and McMullan to turn in strong performances.

Tsirtsis is currently 24-0 on the season and rides a 40-match win streak dating back to last season.

“I don’t think he’s too concerned with being undefeated or how many victories in a row he has,” Harger said. “He’s focused on the match ahead each weekend. The kid trains harder than anyone in the room, and regardless of being undefeated or a win streak, his biggest goal is to win it all again in March.”

And that’s the goal for the whole team.

“It’s still just January,” Harger said. “For me, for most of the guys, the most important thing is to do well at Big Tens and at NCAAs. You can’t win any titles in January, so it’s kind of a back-and-forth kind of mentality going through the grind of the season.”

Correction: A previous version of this article misspelled the name of senior wrestler Pierce Harger. The Daily regrets the error.