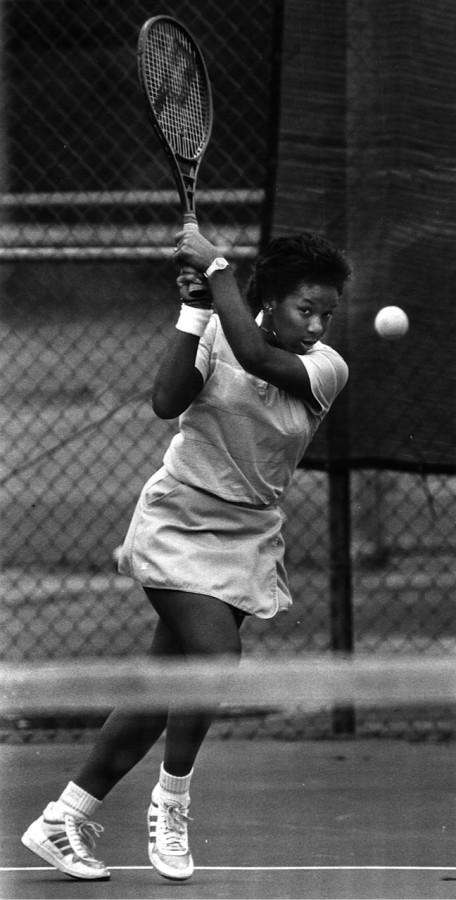 Katrina Adams, pictured during her time at Northwestern, returns a shot. The former Wildcat standout was named president of the U.S.T.A.

For Katrina Adams, discovering tennis at all was unexpected.

“I had a middle-class background (growing up) because my parents were both teachers,” Adams said. “But I lived in a community where tennis wasn’t even thought of. I grew up on the West Side of Chicago, a predominantly black community, and it was about school and education and advancing ourselves.”

Yet this month, Adams was ushered in as the chairman, chief executive and president of the United States Tennis Association, the country’s governing body in the sport. The 46-year-old, a former Northwestern tennis player, is the youngest to head the organization. She is also the first African-American and first former professional player to hold the position.

“If you asked me (in her college days) if I thought that this was in her future, I wouldn’t have been able to say yes,” said Sandy Stap Clifton, a former NU women’s tennis coach. “But it doesn’t surprise me at all.”

Adams concurred with her ex-college coach, saying she had no inclination of one day becoming the leader of the U.S.T.A. when she joined the board back in 2005.

Clifton lured Adams to NU in 1986, following the latter’s stellar high school career that included two individual state titles in Illinois. While the team was a Big Ten juggernaut, Clifton said it was part luck — the cold weather and 30 to 45 minute drive each way to practice weren’t exactly enticing factors — and part locale — Adams could go to school near home — that allowed this star recruit to come to Evanston.

Adams added that her childhood affinity for the Cats and the school’s strong communications program also played a role.

And what a fruitful decision it was. Adams quickly acclimated, earning two first-team All-American honors at NU and winning the NCAA doubles championship in 1987 there as well.

“We kind of kept each other in check,” Stone said. “She was a lot more outwardly confident than I was. She kept saying, ‘When we win NCAAs,’ and I was like ‘If we win NCAAs.'”

Adams said she felt she instilled that no-lose mentality and a sense of bravado into Stone, and her success didn’t stop there. Adams left the University after two years to pursue a professional tennis career, a move she didn’t see as especially risky because she knew her game and there was no glaring lack of money at that level.

The college-to-professional jump is not the easiest, but Adams succeeded with flying colors. A doubles staple in the professional ranks, Adams captured 20 Women’s Tennis Association doubles titles between 1988 and 1999.

Following her retirement from the sport, Adams contemplated starting her own foundation in Chicago when a couple of friends on the board of the Harlem Junior Tennis and Education Program — a-not-for-profit that introduces low-income inner city children to tennis — asked her if she would be interested in joining the group.

Adams said she thought about it and realized she could come to an established foundation and better it. She became the organization’s executive director, a post she still holds today.

The serious time commitment of her new position at the U.S.T.A. is already apparent to Adams, who said she has meetings in California, at the Australian Open and at the Fed Cup in the next three weeks.

“With the U.S.T.A. the biggest thing is putting in the time because this is a non-paying position,” Stone said.

Adams also has clear goals. Her main objectives for her term are to get children more involved in the game and get a Hispanic population that is disengaged from tennis at all levels interested in the sport. Adams is already engaging a task force that will look into the ways the U.S.T.A. can attract these Hispanic communities to the sport.

Adams said she is cognizant of what it means to be the first African-American head of the U.S.T.A. But for a woman who has a long, varied career consistently marked by success, nailing her new role is the focus.

“I happen to be African-American, and that brings a lot more notoriety to me being in that position right now,” she said. “But it’s really about my belief in wanting to make a difference and the guidance and leadership that I have to be able to instill in others. Right now I have a huge task at hand.”