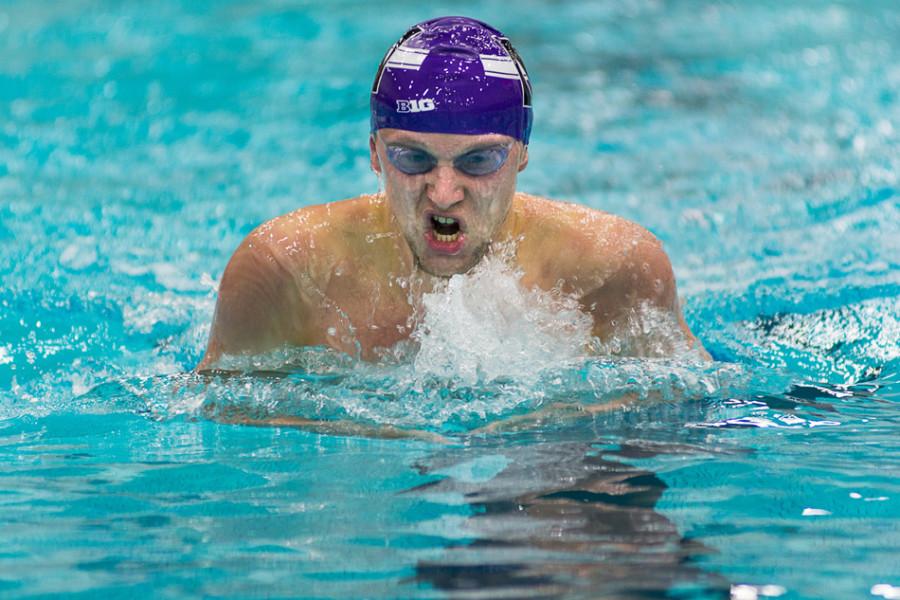 Both Northwestern squads are preparing for a battle against ranked Iowa opponents. Last season, each team snuck by the Hawkeyes with 2-point wins.

The Northwestern men will travel to Iowa City, Iowa, on Saturday to take on the Hawkeyes for the last dual meet of the season against No. 20 Iowa.

Last year the Cats beat the Hawkeyes (then No. 21) by 2 points, 151-149, when they placed first and second in the final relay. And the rivalry is as intense as ever.

“My freshman year we lost, my sophomore year we lost and then last year we pulled it off by a small margin,” senior Uula Auren said. “I want to see if we can pull it off again.”

Iowa boasts a strong freshman class as well as a large number of returning members. The team also recently impressed at the Hawkeye Invitational.

“I know they’ll be ready for us,” NU coach Jarod Schroeder said. “Usually there is a home pool advantage, so we had the advantage last year and we only won by two. They didn’t lose much in terms of graduating seniors, whereas we probably lost a little bit more. But I think our recruiting classes are pretty similar so I think it’s going to be a close meet.”

Schroeder noted that on paper, Iowa is the stronger team especially in the backstroke, breaststroke and fly events. The coach is also hoping NU’s freestyle events, diving team and relays can pull in some crucial points for the Cats this weekend.

As this last dual meet of the season against a Big Ten rival nears, NU is excited to get a taste of the competition that they will encounter the next time they are in Iowa for Big Tens in late February.

“It’s very different for us now than it was from when we started,” Auren said. “We had lost to them some years in a row. It was always tight, but then last year we pulled it off with some amazing swims and that was incredible. I’m really excited to have another opportunity to swim against them.”

The women’s side will also be looking for a team effort victory over the No. 21 Hawkeyes this weekend when they share a bus with the men over to Iowa.

The men weren’t the only NU squad to produce a thriller against the Hawkeyes last year, as the women took part in a two-day battle to the finish against Iowa.

On that occasion, the Cats fell behind 63-47 after the first day, but came back to claim a tight 186-184 victory, in large part due to a strong showing from that year’s freshman class.

Coach Jimmy Tierney said the team has been preparing for this meet all quarter.

Understandably, this is the competition that is on coach Jimmy Tierney’s calendar.

“We are focusing on competing tough against Iowa,”coach Jimmy Tierney said. “We want to go and we want to battle and be really, really tough.”

The coach said he doesn’t envision this meet will be any easier than last year’s incredibly competitive contest.

But after completing a landslide home victory against Milwaukee on Friday, Tierney said he is ready to get back into the fight.

“It’s going to be a challenge, but I’m excited about it and looking forward to it,” Tierney said. “I think these girls are stepping it up another notch for next week so it’s going to be a fun trip, I hope.”