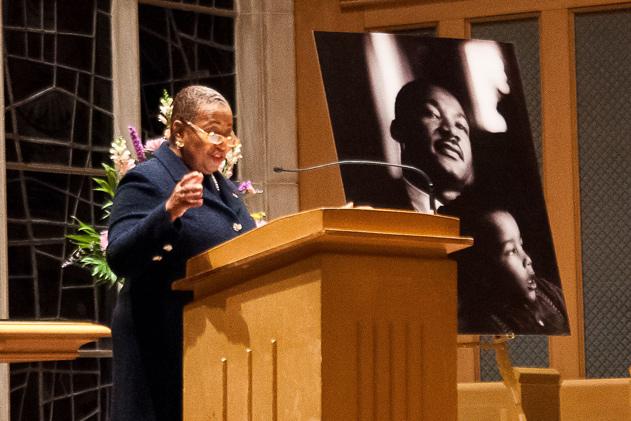 Former U.S. Senator Carol Moseley Braun speaks during the candlelight vigil in honor of Martin Luther King Jr. She encouraged the audience to be courageous and to teach younger generations the importance of the civil rights movement.

Moseley Braun, also a former U.S. ambassador to New Zealand and the first African-American woman to serve in the Senate, encouraged the audience to pass on knowledge to younger generations, in order to preserve history and to progress to a more understanding future.

“I am of the generation that formed the civil rights movement and I actually met and marched with Dr. Martin Luther King,” she said in her speech. “It is important that we take time to remember and recall the stories that may be familiar to us but foreign to the new generations.”

Moseley Braun spoke about the importance of empathy and courage during the civil rights movement and their importance today.

“Each of us can find meaning in our own lives by doing what we can do to help others,” she said. “It is not enough to think of yourself as a good person. What matters is what you do.”

“It made us all better people,” she said. “It reached for courage and community and truth … it called on each individual to take personal responsibility to defeat the forces of racism and hate.”

Moseley Braun referenced the recent demonstrations in France against terrorism, comparing them to the American civil rights movement of the 1960s. She also reflected on the importance of strength and union regarding the “Je Suis Charlie” movement that began in light of a deadly attack on French satirical newspaper Charlie Hebdo’s offices.

Encouraging audience members to recognize the power of their own actions, Moseley Braun reflected on all the individuals that participated in the civil rights movement whose names are unknown, yet were key to the end result.

“It was ordinary people who collectively formed the movement,” she said. “It was the activities of those people as individuals that created the macro force that historians and all of us will remember.”

After her speech, Moseley Braun told The Daily she is inspired by younger generations’ political actions.

“People came out tonight for this, people are marching for an end to police brutality, for an end to income inequality, they are focusing in on asking the right questions to their government,” she said.

Courage, Moseley Braun said, is one key characteristic of King that she’d like to see in today’s generations.

Among the audience members were University President Morton Schapiro and Evanston Mayor Elizabeth Tisdahl. Schapiro said it was an honor to have Moseley Braun speak at the vigil and encouraged the NU community to follow Moseley Braun’s advice.

“As she said, we should take it on to ourselves every day to try to do something more just and humane,” he told The Daily.