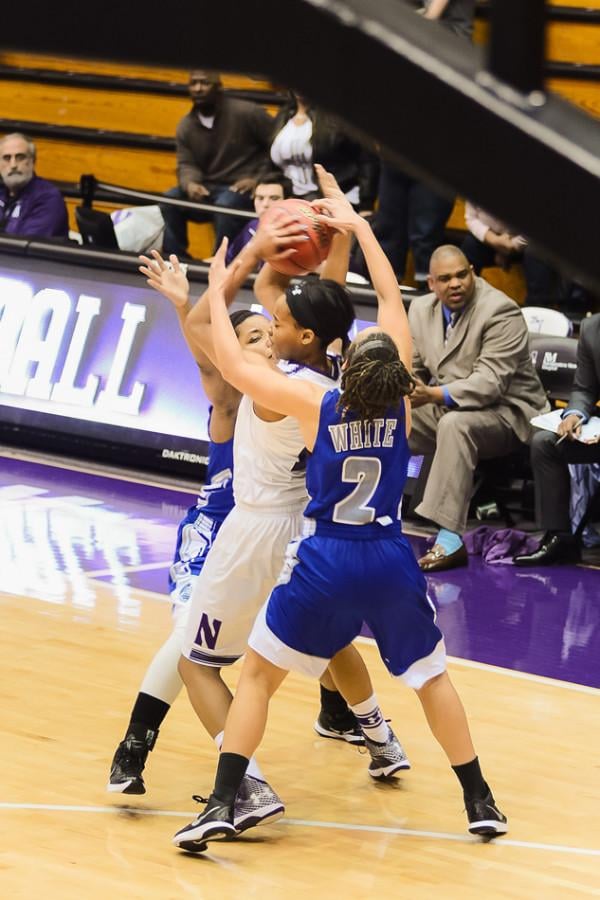 Lauren Douglas is double teamed on the perimeter. The Wildcats' loss to Michigan was the team's second in row.

The loss marks the first time all season the Cats have dropped back-to-back games. It was also their first defeat at home.

After an impressive 9-0 run to start the game, NU seemed ready to walk away with the victory. The Cats only appeared emboldened from there, jumping out to a 26-13 mark with eight minutes left in the first half after a 3-pointer from senior Alex Cohen.

NU was firing on all cylinders at the start, but Michigan would not back off. The Wolverines were able to push their way back into the game and the Cats clung to a 31-27 lead at the break.

“It felt like in the first half we were in control in the game,” coach Joe McKeown said. “We shared the ball, we defended well and we were able to rebound and get out.”

The Cats shot 50 percent from the field in the first half and held Michigan to a dismal 33 percent. NU, however, took 12 fewer shots than the Wolverines in the opening period, allowed eight offensive rebounds and committed four more turnovers than Michigan. These aspects of the game came back to bite the Cats in the second half.

Michigan shot out strong to open the second and would take its first lead of the game with 16 minutes remaining. The Wolverines never backed off from there, and despite their best efforts, the Cats could not catch up.

NU shot 50 percent for the game and only lost the rebounding battle by one. The Cats’ downfall arose from those troubling first-half signs creeping into the final period. In the second half, NU took seven fewer shots than the Wolverines, gave up six offensive rebounds and had five more turnovers than Michigan.

“(Those) turnovers plagued us when we needed buckets,” McKeown said.

While NU was throwing away possessions, Michigan was fighting to get more. The Wolverines pulled down 14 offensive rebounds for the game, which led to 14 second chance points.

“It’s something that I need to improve on,” Cohen said. “Allowing a team to have 14 offensive rebounds is not what we need to do in order to win, and we know that.”

Michigan did almost exactly what its season averages said it would do on the rebounding end, and that looked like one of its keys to victory. NU, on the other hand, had an anomaly of a night in the turnover department.

Following Wednesday night’s contest at Iowa, where the Cats only gave the ball away nine times, NU couldn’t keep its grips on the rock against Michigan, falling into a whopping 21 turnovers.

NU has the second best turnover margin in the conference, averaging 4.71 fewer turnovers than opponents each game. But on Saturday, NU had nine more turnovers than the visitors.

Still, with 13 wins by mid-January, there is no need to dwell on this defeat.

“We’re in the best league in the country, so you can’t feel sorry for yourselves,” McKeown said. “We got a real positive energy this year about our team and I want to keep that.”

A previous caption on this story misidentified the player in the photo. It is Lauren Douglas. The Daily regrets the error.