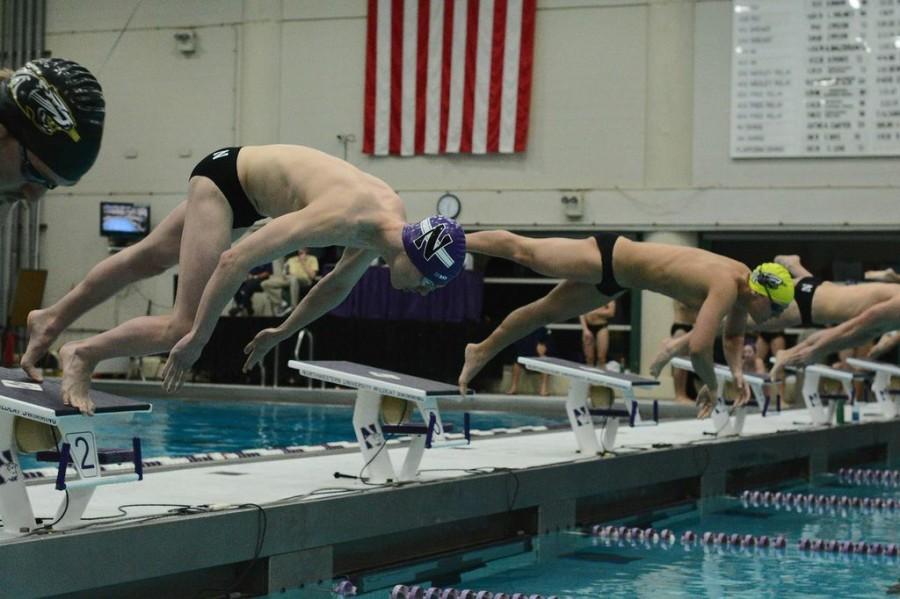 Northwestern dives into action. The Wildcats took care of business against Milwaukee on Friday night, easily defeating the Panthers 137-98.

Northwestern seniors ended the last home meet of their careers with a bang Friday when the team beat Milwaukee 137-98. The Wildcats (7-3, 0-2 Big Ten) won every event in the competition and secured a winning season with the overall victory.

The senior day win against the Panthers (2-5, 0-3 Horizon League) allowed the Cats to go undefeated at home for dual meet competitions this season. Coach Jarod Schroeder highlighted the importance of that legacy in honoring the six seniors on the team and sending them off on a high note.

“Prior to the meet we always do a pre-meet talk, and this one was all about the seniors,” Schroeder said. “We talked to them about how far the program has come the last four years and I thanked them for buying into the team building things and the overall vision of the program that we as coaches and staff have.”

The competition was the last time the seniors will race at the Henry Crown Sports Pavilion pool.

“It’s a surreal experience because you don’t even realize it’s happening, it just feels like a normal meet,” Ferguson said. “But I think as soon as I get to the dinner afterwards tonight, it’s going to hit me that I’m never going to get to do this again.”

Because relay teams can only include four athletes, one of NU’s five senior swimmers was left off the all-senior relay squad. That standalone was Andrew Seitz, who was placed on a different medley team and thus took part in some friendly competition against his fellow seniors.

Auren said he noticed a “nice duel” between Rosler and Seitz in the butterfly leg of the relay. Seitz did, however, have his chance at relay victory when he was the anchor in the 200 free relay and helped secure the NU win.

The all-senior relay was not the only change in the lineup, and Schroeder felt his team responded well to the adjustments made.

“Overall I thought it was a good meet for us,” Schroeder said. “A lot of our guys didn’t swim their primary events, they swam their secondary or even their third event and they still approached their races the way I wanted to see them approach their races.”

In addition to the five senior swimmers, John Andrade is the sixth senior athlete on the team and a diver — adding nice depth to that portion of the squad. Andrade transferred from Notre Dame two years ago and had his season best on the 3-meter on Friday.

Despite it being the last home meet for the seniors, there are still more competitions left in the season, including a tough one Saturday against Iowa — a team the Cats defeated by a razor-thin 151-149 score last year.

“It hasn’t hit yet, there’s still a lot of season left,” Auren said. “It just kind of feels like a normal dual meet, although it was nice to see all the parents here. It was a lot of fun, but I guess I just haven’t thought about it yet.”

Focusing on this most recent meet though, the seniors feel good about the legacy they will be leaving here in Evanston.

“It’s always a good way to go out,” Ferguson said. “Winning a couple of events, then winning the whole competition, it’s how you want to end your last home meet. It was a great experience.”