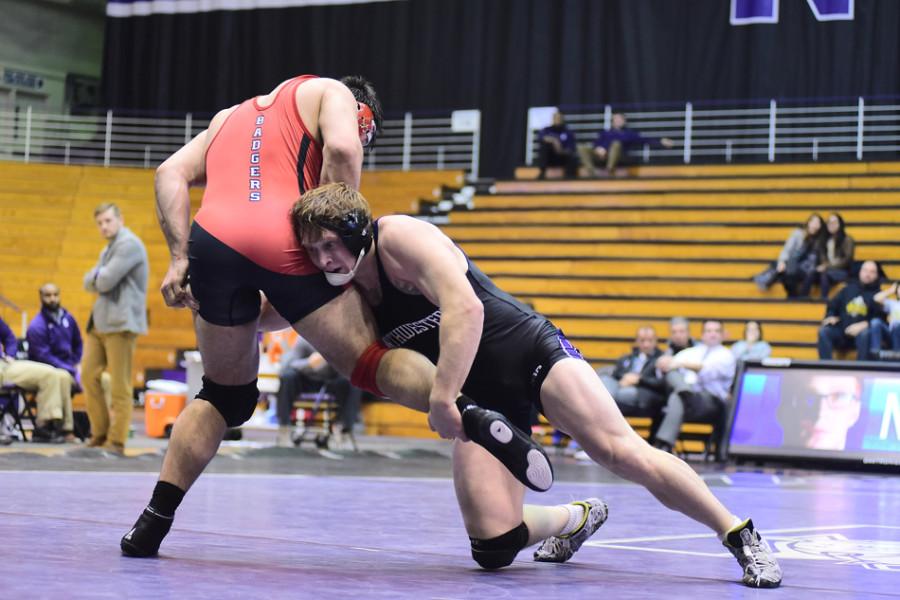 Mike McMullan battles against Wisconsin’s Connor Medbery. The senior heavyweight has lost his last two matches and dropped from No. 2 to No. 4 in his weight class, but he doesn’t plan on continuing the skid.

“A double road weekend is a unique experience,” senior heavyweight Mike McMullan said. “But we’ve got a good opportunity to get two team wins against quality opponents.”

The week before, McMullan lost to Iowa’s Bobby Telford in the finals of the Midlands Championships.

“I’m looking to get back on track after losing my last two matches,” McMullan said. “I’ve got to score a lot of points, get back in the groove and, you don’t want to look ahead, but get ready for a rematch against Telford next week when we face Iowa.”

McMullan fell from No. 2 to No. 4 in the InterMat national heavyweight rankings after last weekend’s loss. His opponent, Connor Medbery, rose from No. 5 to No. 3.

And how is McMullan handling the defeat?

“I’ve wrestled Medbery a bunch,” he said. “He’s a quality opponent, so I can’t get too down on myself for that. I’ve just got to keep on moving forward and get back to what works for me and keep my eyes on March.”

McMullan knows exactly what he needs to do to get back on track.

“I’m just looking to get back to my offense, get back to dominating on top, putting up a lot of points and just having a lot of fun out there and not stressing about anything,” he said.

But McMullan isn’t the only one looking to redeem himself for a loss at Midlands. Harger again faces Indiana’s No. 4 Taylor Walsh, who topped him at the Midlands finals and won the Dan Gable Most Outstanding Wrestler award for the tournament.

“That’ll be a good opportunity for him to get some redemption and get on the other side of that matchup,” McMullan said.

But there’s one Cats wrestler who won’t need to redeem himself. Sophomore Jason Tsirtsis, the defending NCAA Champion at 149 pounds, is 22-0 on the season and holds a 38-match win streak.

Malone topped Sabatello in a 9-7 sudden victory decision at Midlands two weeks ago, and Polizzi is coming off an impressive 7-6 victory last week over Wisconsin’s then-No. 10 Timmy McCall.

The match to watch against Indiana is Harger vs. Walsh.

The Hoosiers’ luck hasn’t been any better. They’ve also dropped their two conference matches since Midlands, a 42-3 loss to No. 6 Penn State and a 36-3 defeat by No. 9 Illinois.

But no matter who wins these matches, at least one of the three teams will walk away with its first conference victory.