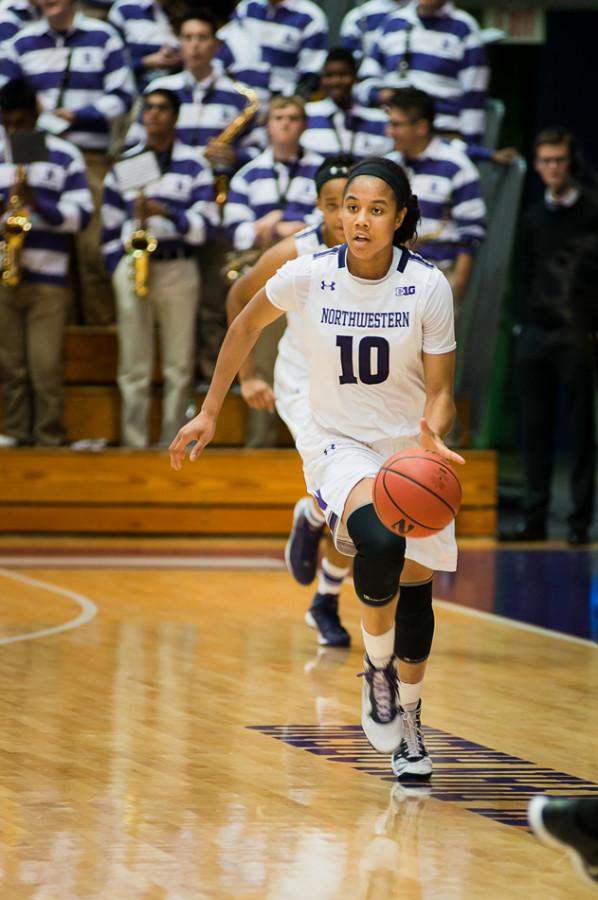 Nia Coffey brings the ball up the floor. The sophomore forward was a monster on the glass against Iowa, pulling down six offensive rebounds among 15 total boards, but she could only manage 4-of-22 shooting from the floor.

The Hawkeyes shot 50.8 percent from the field while the Cats sank just 34.7 percent of their shots in the 83-70 loss. Despite a back-and-forth first half, Iowa pulled away in the second period to secure the victory.

“We could never get the ball or the lead in the second half,” coach Joe McKeown said. “I thought we fought really hard and had plenty of chances.”

NU came out strong, building a 16-9 lead early in the contest. The Hawkeyes, however, responded, methodically cutting the Cats’ advantage and jumping out to its own over the next nine minutes.

In the final minutes of the first half, the Cats, led by junior forward Lauren Douglas, found their footing once more. Douglas tallied 12 points in the last 1:44 of the period as NU inched closer to Iowa. NU sat just three points behind Iowa as the teams headed into halftime, the score board reading 41-38.

The second half was a different story.

While the Cats continued to struggle with shooting, the Hawkeyes proved to be efficient, knocking down 51.9 percent from the field in the final period and growing their lead to as much as 20 points. Despite a late surge by the Cats, NU was unable to make much of a dent in the Hawkeyes’ lead. In the end, Iowa handily defeated the Cats by 13 points.

NU’s defense did have success when defending against threes. The Cats limited the Hawkeyes to 27.8 percent shooting from beyond the arc. In contrast, the Cats netted a third of their three-pointers.

Such a split would’ve appeared important to NU’s prospects heading into the contest. Although the Cats actually hit on a lower rate from beyond the arc than their season average — 34.2 percent — NU pummeled one of the best long shooting teams in the land.

Iowa entered the contest 2nd in the nation from three, posting a potent 40.5 percent clip. The Cats’ effort forced the Hawkeyes nearly 15 percent below their season average beyond the arc.

But that came with a consequence. The Hawkeyes put in a robust effort down low, outscoring NU 40-36 in the paint, with Hawkeyes center Bethany Doolittle notching 29 points and grabbing 12 rebounds.

Junior guard Maggie Lyon attributed much of Iowa’s offensive success to this ability to defeat NU down low.

“They really spread the court well on offense,” she said. “They pulled us out, and we left the basket vulnerable — something we need to fix for Michigan.”

McKeown agreed, simply stating, “When they come to NU, we will have to defend a lot better.”

Sophomore forward Nia Coffey recorded her sixth double-double of the season — the 14th of her career — with 12 points and 15 rebounds. Lyon and senior Alex Cohen both tallied 16 points.

Lyon asserts that the loss wasn’t fully about the Cats’ offensive or defensive struggles but rather a dip in effort.

“Team intensity, which we have been doing all season, just wasn’t as good tonight,” she said. “It’s something that shouldn’t be lacking … We need to play harder, practice harder.”

As the team looks to play Michigan on Saturday, McKeown remains confident in his team’s abilities.

“We are playing great, and there’s no reason to let this game be anything but a learning experience,” he said. “To be 13-3 in mid-January says a lot about our program and our kids.”