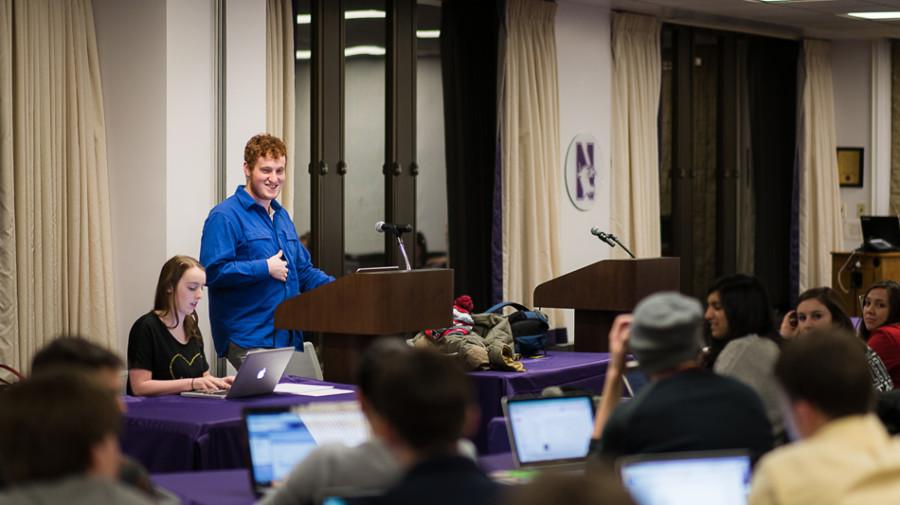 Speaker of the Senate and Weinberg junior Noah Star discusses the ASG election commission Wednesday. Seven ASG members were elected to the commission.

Associated Student Government voted Wednesday on a new election commission, which serves as the judicial body during ASG elections and monitors campaign violations.

Seven spots were available on the commission, and seven students were nominated for the positions.

“I think it’s time for me to get much more involved in ASG,” said Weinberg sophomore and nominee Matt Cowen, senator for Shepard Residential College, Allison Hall and Public Affairs Residential College. “I’m someone who pays attention to national elections, so here I’m very much looking forward to doing a good job and working to make sure it’s a well-run election.”

Weinberg senior Dana Leinbach, who has served on the election commission and was also nominated, said there were no campaign violations last year, although it varies from year to year. She also said the commission is responsible for the vice presidential and presidential debates and the creation of the election ballot.

Last year’s elections were “un-messy” because ASG shortened the election timeline, said Weinberg sophomore and nominee Lauren Thomas, senator for Bobb Hall, College of Cultural and Community Studies and GREEN House. She also said the election guidelines are too complicated and suggested the commission simplify the process.

Leinbach said she has been on the commission during both very contentious and less contested elections. She said going through the guidelines with candidates and being available for questions is key to elections running smoothly.

All seven nominees were elected to the commission.

Senate also accepted three proposals for the Wild Ideas Fund. The new Christian magazine Veracity received $150 to distribute 300 copies and the Polish-American Student Alliance was allotted $450 to fund a performance group for a Polish culture night. Real Food at NU received $100 of funding for copies of the book The Third Plate: Field Notes on the Future of Food by Dan Barber to give away to students for free.

“The new name would align more with what the committee actually does,” the bill said. “It introduces the extremely important concept of accessibility. The campus cannot be inclusive (let alone diverse!) if it is not accessible to all.”

The legislation was passed.

In addition, Leinbach was elected as ASG parliamentarian, replacing Weinberg senior Petros Karahalios, who resigned from the position this quarter. Weinberg junior Kevin Harris, community relations vice president, also announced the Association of Big Ten Students’ annual winter conference will feature about 85 students from other Big Ten schools. The conference will be held at Northwestern from Jan. 16-18.