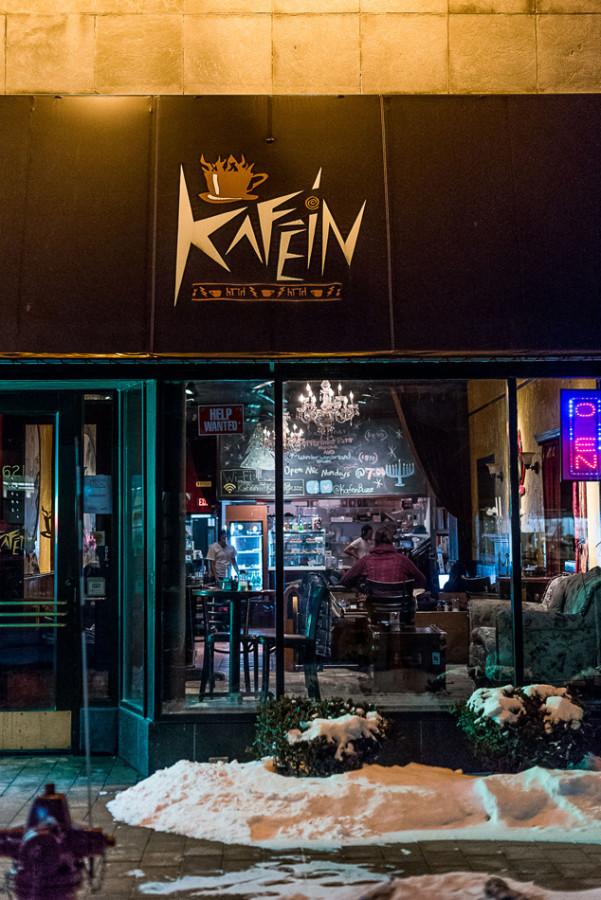 The cozy atmosphere of Kafein ushers in a cast of performers for its open mic nights each Monday. From singers to stand-up comedians, every show is unique.

The yellow walls of the single room, adorned with cheeky renditions of famous paintings, such as the Mona Lisa holding a tiny cup of espresso, glow with a warmth that’s echoed in the welcoming attitude of Kafein’s Open Mic Night patrons.

Each Monday, customers can buy a latte and watch Evanston’s finest musicians, poets and comedians perform original work, covers and even parodies of Demi Lovato songs in Hebrew, in an atmosphere that’s pure college coffee shop.

“I’m pretty sure they’ve been doing it since the beginning, and the beginning was a long time ago,” said Henry Sokol, one of Kafein’s baristas.

In fact, Open Mic Night in its current iteration, Monday at 7 p.m., has only been around for a year and a half. But since the coffee shop’s opening more than 20 years ago, it’s been a relaxed space for local artists to gather and perform for the public.

Cray has been here since he moved to Chicago in 1989, after college. A veteran of the Evanston cafe open mic scene, Cray, crooning folk-inspired tunes in a mellow tenor voice, plays covers and originals on his guitar.

Most of the performers are musicians accompanying themselves on guitar, and most of them frequent Kafein’s open mic, even playing every week. Liam Conway-Pearson is a Weinberg junior who deals in Bob Dylan and Beatles covers and plays the harmonica with a sheepish grin. Max Abner is a Communication sophomore whose distinctive, raspy voice reminds one of singer-songwriter The Tallest Man on Earth.

Political poems, a song in Russian about a soldier’s battlefield experiences, a cover of Taylor Swift’s “Shake It Off” — all are applauded with equal enthusiasm by a constantly revolving set of coffee drinkers, either carrying on their own conversations or looking attentively at the performing stage.

Conway-Pearson and Abner describe the performing atmosphere as “cozy.” Weinberg freshman Sean Casey, who regularly performs his stand-up comedy at the Open Mic, agrees, saying that the environment is “super open and friendly.”

Indeed, after watching Conway-Pearson’s set — which included a refreshing medley of Dylan’s “Subterranean Homesick Blues” and the Beatles’ “What Goes On” — a patron sitting with his friends decided to get up and sing for the first time in public, accompanied by Conway-Pearson on guitar.

The camaraderie of the performers created an atmosphere of acceptance and comfort, a perfect opportunity for budding performers as well as veterans to be creative. Kafein’s Open Mic Night fosters a sense of artistic community that includes the audience as well.