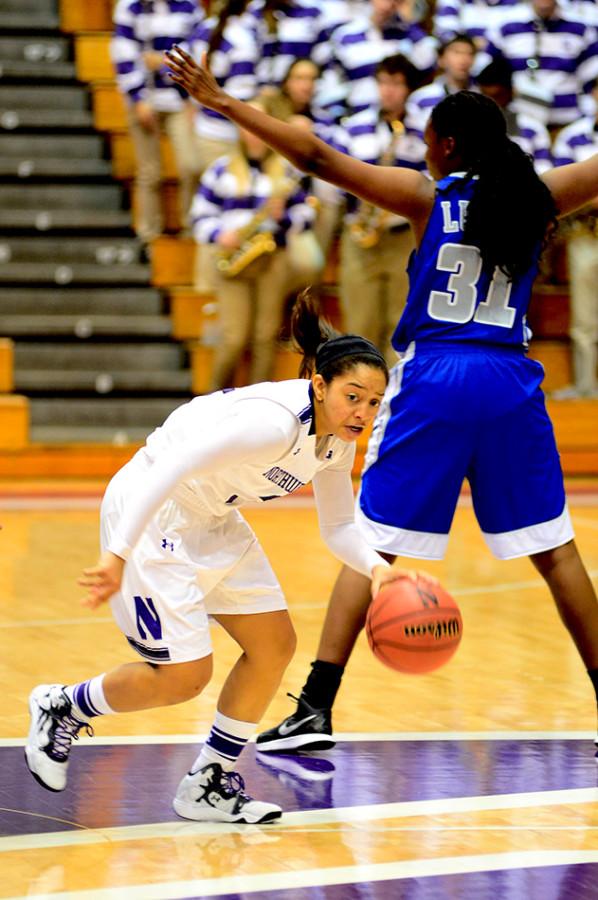 Ashley Deary weaves her way through traffic. Five Wildcats scored double-digit points against Michigan State on Sunday, but the sophomore led the way with a team-high 18 points.

After falling behind 14-5 at the start of the game, Northwestern used a 20-0 run to establish a lead it would not relinquish for the rest of the game.

“We just tried to settle down,” coach Joe McKeown said. “We knew the shots that we wanted to get, and felt like they were there, it was just that people were a little hyper coming out.”

During the run, NU had assists on six of the eight baskets from the field that put the team ahead 25-14. Along with that, the Cats started playing a pace the Spartans did not look comfortable competing at.

Clearly NU’s competitiveness was not lacking.

“(There was) just a drive to want to win,” sophomore guard Ashley Deary said. “I know we started off slow, but we just really wanted to win this game and prove we were the better team.”

From there, the Cats got into a back-and-forth game with the Spartans until the 5-minute mark, when NU started a 15-4 run that netted a 44-29 halftime lead.

Deary led NU offensively. She shot 6-of-6 from the field and 2-of-2 from the free throw line in the half to post 16 points to go along with her four assists. Junior Maggie Lyon added 10 points of her own, as the other leading scorer at the break.

To start the second half, the Cats looked to get sophomore Nia Coffey more involved. Coffey leads the team in scoring for the season, averaging 15.6 points per game, but shot 1-of-7 in the first half and had only 2 points.

“We were just trying to get her in different spots, get her shots in different locations,” McKeown said. “She’s such an explosive player, you want to make sure she gets touches. I’m glad she’s on my team.”

Coffey scored 8 of the team’s first 15 points out of the break. The Cats looked like they were ready for a blowout victory against the Spartans as they established a 20-point lead with 12:25 left in the game.

Unfortunately, it would not be smooth sailing for the Cats. Michigan State, led by the game’s leading scorer, sophomore Aerial Powers, was able to fight back into the game. Powers put up 24 points, including 15 in the second half to help cut the NU lead to 4 points with 3:20 remaining.

“I think that being at home, it definitely helps to maintain composure, especially when the other team is making a run,” Lyon said. “They were getting momentum and energy that they hadn’t had earlier in the game with that run, and I think we countered that pretty well.”

The final counter punch for the Cats came from Lyon as she sank a three-pointer with 41 seconds left on an assist from Deary. This put NU up 77-70 and following a missed shot from the Spartans, Lyon grabbed the game’s final rebound so the Cats could run out the clock.

Five NU players ended the game in double figures. Deary was the team leader with 18 points and had a game-high 10 assists as well. Lyon finished with 15 points and seven rebounds while senior Alex Cohen totaled 14 points. Coffey and fellow sophomore Christen Inman had 12 and 14 points respectively.

“I’m really proud of our team,” McKeown said. “We’re still young, we still do things that we got to get better at, but we aspire to be a great team. I think it’s good that we have some teaching points too.”