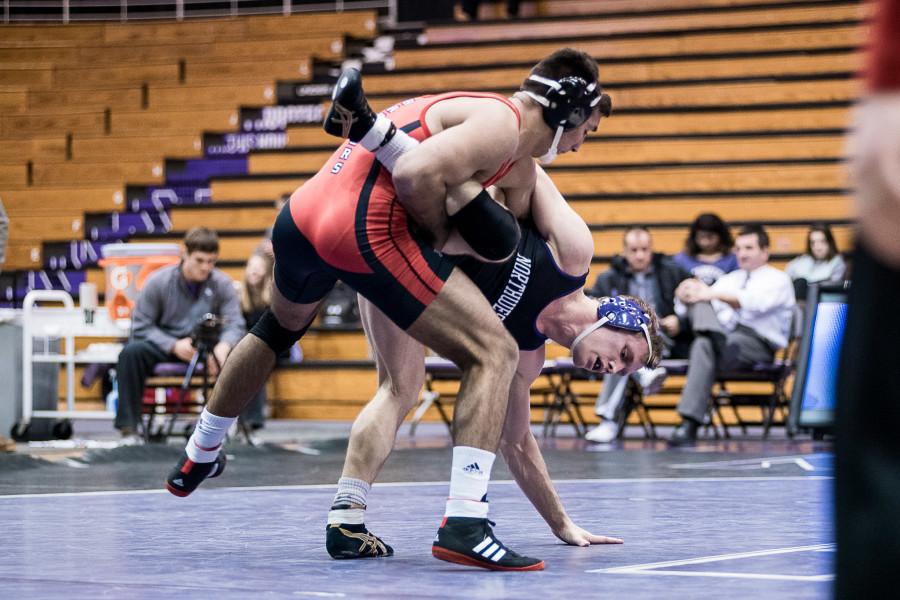 Wisconsin's Ricky Robertson puts Northwestern's Mitch Sliga in a precarious position. Trouble spots were a familiar theme for the Wildcats on Friday night, as three NU wrestlers were pinned in a 30-16 loss to the Badgers.

The home environment did not help the Wildcats on Friday night, as the team dropped another Big Ten contest.

“It obviously wasn’t a great meet for us,” coach Drew Pariano said. “It’s strange because we had really good preparation leading up into it, even this week and today. But that doesn’t mean a lot if you don’t perform a lot when the lights are on.”

The night actually started out well for the Cats.

The meet opened with the 149-pound weight class, in which NU (8-3, 0-2) seems virtually unstoppable. The Badgers’ Rylan Lubeck took on No. 1 sophomore Jason Tsirtsis, the defending NCAA Champion, but walked away as all of Tsirtsis’ past 37 opponents had — in defeat. Tsirtsis advanced to 22-0 on the season with a 6-1 victory and gave the Cats an early 3-0 lead.

“It was a pretty good performance,” Tsirtisis said. “But there were some moments that could have been better. I need to wrestle better for the whole seven minutes.”

NU’s luck went downhill from there.

Sophomore Ben Sullivan and No. 7 senior Pierce Harger suffered falls in the next two matches to Jarod Donar and No. 3 Isaac Jordan. Sullivan was pinned directly after having his leg looked at and then limped off the mat.

“With Sullivan it was an unfortunate situation where it goes from a normal 3-point decision to a fall, a 6-point team score for them, and he kind of tweaked his knee or ankle or whatever it is,” Pariano said. “We’re gonna see how bad that is. It’s unfortunate, but all you can do is come back.”

As for Harger’s pin, it was a similar cruel twist in fate.

“(The Wisconsin athlete) was in on a nice shot, and we kind of just stopped wrestling for a second,” Pariano said. “That kid’s good, he’s very good. He’s an opportunistic type wrestler and he capitalized on it.”

The half concluded with two more defeats for NU: A forfeit at 174 pounds and a 4-0 loss by redshirt freshman Mitch Sliga at 184 pounds to Ricky Robertson. NU entered halftime down 21-3.

“It’s hard on the team,” Pariano said of falling behind early. “But the message to the team and the message at the break was, however the first five matches went, that doesn’t dictate how you’re going to wrestle. (Alex) Polizzi was a prime example of that, beating a really good guy.”

Senior No. 12 Polizzi at 197-pounds won a nail-biter after the break over No. 10 Timmy McCall. After falling behind 6-4, Polizzi pulled a reversal to get 2 points and scored the riding time point to win a 7-6 decision.

“He didn’t allow the momentum of the match at the time affect him,” Pariano said. “He was in a pretty precarious spot there, but he wrestled through it and rode the guy out.”

Next came one of the night’s biggest blows, McMullan lost 7-6 to No. 5 Connor Medbery in a thriller.

Medbery pulled ahead early 3-0 with a takedown and an escape, but McMullan fought back to tie it up 4-4. Down 6-4, McMullan got a reversal to tie it up in the final minute, but he ultimately could not maintain control and Medbery escaped with about 15 seconds left to come away victorious 7-6.

“There’s 15 seconds left,” McMullan said. “I know I’ve got to get a takedown to win the match, so I’m going all out. It was sloppy. I thought I had it at the end there, but I wasn’t able to secure it.”

In the final matchup, junior Jameson Oster turned in NU’s best performance of the night with a 16-5 major decision over Jesse Thielke at 141. But it was too late. The Wildcats were already down 30-12 and his 4 points were not enough to close the gap.

“It wasn’t the lack of effort as much as we just didn’t finish some of our crucial positions, and it cost us in a significant way,” Pariano said. “We’re not happy, but we’re gonna let this motivate us as we get back to work.”

Correction: A previous caption of the above photo misidentified the Northwestern wrestler pictured. It is Mitch Sliga. The Daily regrets the error.