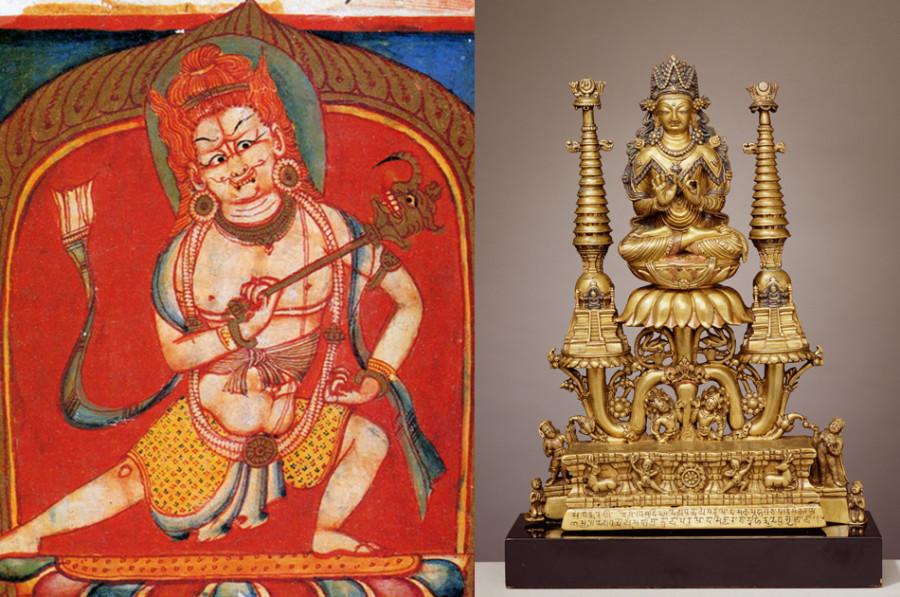 Block Museum of Art will display these two artifacts, a Crowned Buddha Shakyamuni statue and Thangka of Four-Armed Mahakala depiction, along with more than 40 others when the new exhibition opens Tuesday.

An 8th-century brass sculpture with copper and silver inlay, a masterpiece of technical workmanship, sits in the middle of an empty room.

The display isn’t located in the Metropolitan Museum of Art or The Louvre. Rather, it’s part of Block Museum of Art’s new exhibition, which includes two parts — The Collecting Paradise: Buddhist Art of Kashmir and Its Legacies, and Collecting Culture: Himalaya through the Lens — opening Tuesday. Prof. Rob Linrothe, who is curating the exhibit, said this physical set-up is an integral part of understanding the exhibition.

“We’re going for a different approach in isolating these objects so you don’t see them as a series, but rather you see them more individually,” Linrothe said. “You’re aware you’re walking into a different kind of space. That self-awareness enhances your openness, we hope, that you’re not going to see things you’re familiar with, but if you do look hard, look well, you’ll see amazing workmanship.”

The exhibition is split between two floors, one featuring art from the Kashmir region as perceived by the people of the West Himalayas. Linrothe said this floor shows how the different objects have been or can be displayed by different groups of people. The religious aspects of the art are prominent on this level, to reflect the way people from the West Himalayas have interpreted artifacts from Kashmir. The second part of the exhibition places the pieces in a Western context as seen through the eyes of Italian and American explorers, Block spokeswoman Joanna Gueller said.

Block director Lisa Corrin said the exhibition was a departure from the museum’s past displays in that it features work from a different region.

“It’s the first major exhibition from India, and it’s the first exhibition of historic art from this part of the world ever at the Block Museum,” Corrin said. “It represents a new direction for the museum, which is a strong emphasis on global art across time and across cultures.”

The exhibition features sculptures, photographs, textiles and other mediums. Since first conceiving of the exhibition to use in his teaching, Linrothe teased out the idea with the museum and the idea earned a National Endowment for the Arts grant, Block’s first ever.

Linrothe said seeing the exhibition come to life has been a remarkable experience.

“I’m delighted to be able to share these things that I’ve admired for so long,” he said. “In a way, this is the imaginary exhibition for me, because I got to choose all the (pieces) that if I could, I would bring together. And, my goodness! They’ve actually done it.”

The unique array of pieces features a region understood in a certain way by Americans, Corrin said. However, the Kashmir and West Himalayan areas can be viewed through a different lens at Block.

“We read in the newspaper a great deal about the political upheavals that are taking place in this region, but it’s a place with an extremely rich and important history because of its location along the Silk Road,” Corrin said. “This exhibition will, for the public, fill important gaps in their understanding of that history.”

In addition to the rare locational focus of the exhibition, Linrothe said its focus on how the artifacts actually arrived at the museum is a unique feature.

“By exploring issues of collecting, we’re, if not breaking new ground, at least we’re moving in the same direction as a new movement in museum practice, which is to not pretend that these things just appeared in the museum by some accident of grace but that they were acquired, and sometimes by not very happy means,” Linrothe said.