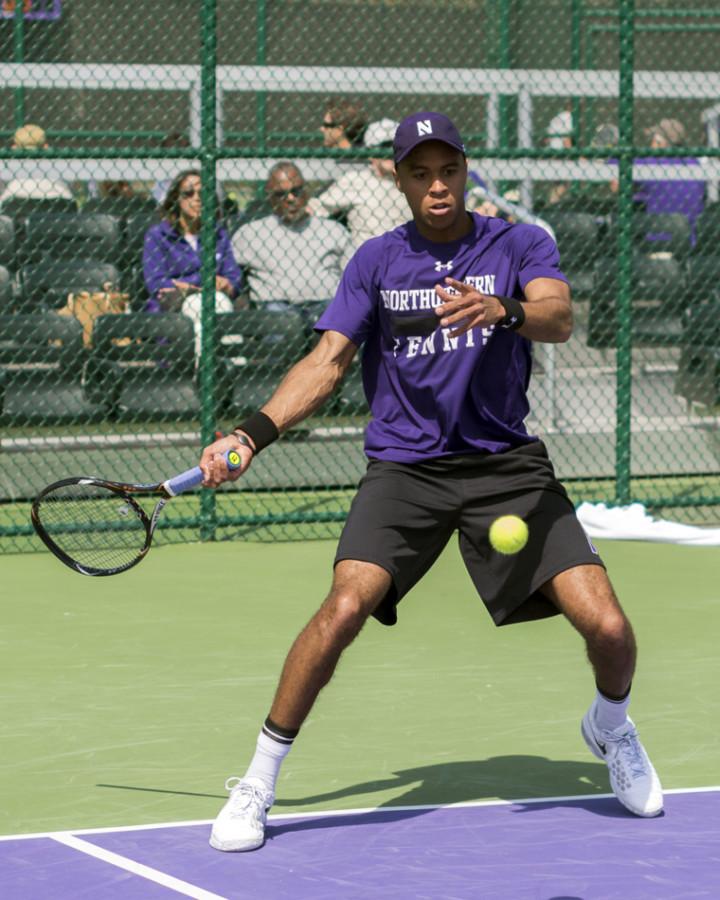 Sam Shropshire sets up for the return. The sophomore and preseason No. 78 singles player looks to build off a stellar freshman season where he earned First-Team All-Big Ten and Big Ten Freshman of the Year honors.

With the spring season inching closer, the Wildcats have their work cut out for them if they want their fall tournament showings to translate into wins.

Northwestern athletes had mixed results in the ITA Midwest Regionals and Big Ten Indoor Championships in October and November.

All nine members of the active roster participated in the main draw of at least one of the two tournaments, a rare occurrence for NU.

Sophomore Sam Shropshire and senior Alex Pasareanu had standout performances and made it to the quarterfinals of the ITA Midwest Regionals and the Big Ten Indoor tournament, respectively.

But coach Arvid Swan thinks the team could have done better.

“We had a good performance,” Swan said. “If we had a couple more guys advance a little further into the tournaments, it would have been a great performance.”

In particular, Swan said he believed Shropshire, hot off of an impressive freshman year, “did a good job, but is more than capable of winning the Midwest Regionals.”

Shropshire seems to take a more laid-back approach to the team’s fall performance, which does not affect the Cats’ record heading into team play.

“In the fall, some people see it as kind of a warm-up,” Shropshire said. “I think those tournaments did a good job of doing that for us, getting us into match mode.”

But NU will have to do more than just warm up if it wants to expand on last year’s success, when the Cats cracked the top thirty in the nation and got three rounds into the Big Ten Championships for the first time in more than 15 years. And last year’s team was led by Raleigh Smith, a departed senior who was a two-time First-Team All-Big Ten member during his NU career.

“We did lose a great player in Raleigh and that’s really hard to replace,” Swan said. “But we have (Logan) Staggs who is as good of a freshman as there is in the country, so it’s just a different mix.”

Swan is referring, of course, to freshman phenom Logan Staggs who was ranked as the No. 5 recruit in the nation by tennisrecruiting.net. Although Staggs is easily the shortest player on the team, measuring at only 5-foot-7, he carries a significant amount of the team’s hopes.

“We were good last year,” Shropshire said. “We lost Raleigh, and obviously that is going to be difficult, but with Logan coming in and all the other guys stepping up I think we’re going to be good this year.”

Staggs is the only freshman on the team, coming in for the departed Smith. He says the transition into collegiate tennis has been challenging and he is already feeling the pressure.

“Whereas (in the past) I’ve only played for myself so if I lose, it’s only me losing,” Staggs said. “Now I feel like if I lose I let the team down, I let the coaches down.”

NU’s first scheduled match of the season is at North Carolina State on Jan. 16. When asked what his goals were until then, Shropshire responded quickly.

“I’m out here every day just working on my game with the coaches. I’m here trying to get better fitness-wise and with the game daily, so that’s my goal,” he said.