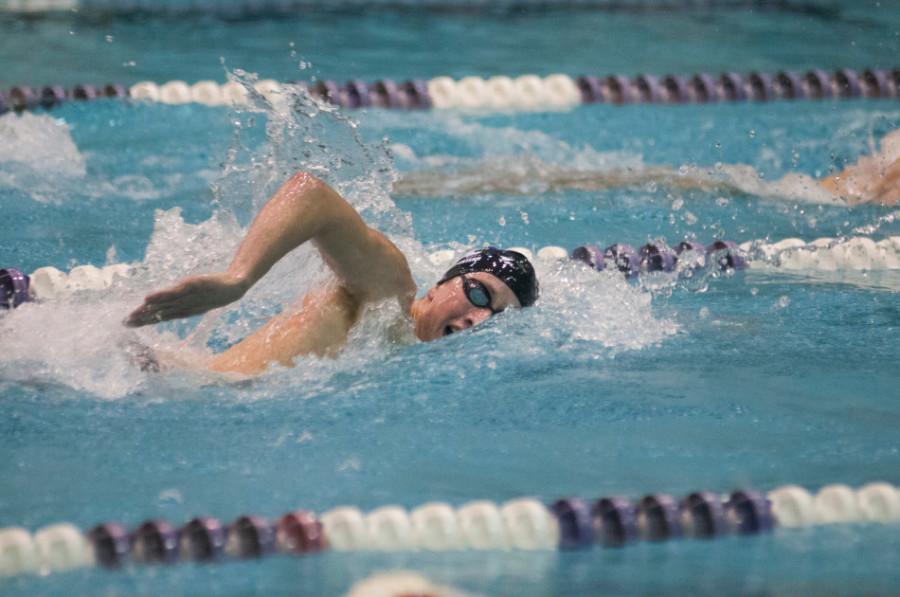 Jordan Wilimovsky strokes through the water. The junior swam the 1,650 free in 14:51:10 at AT&T U.S. Winter Nationals, placing fifth nationally and first among college-level competitors in the event.

Men’s swimming has experienced both victory and defeat in the first half of its season. With a cumulative record of 5-2 for regular season competition, the Wildcats have only fallen to the University of Missouri and the University of Wisconsin. However, according to the most recent College Swimming Coaches Association of America top 25 poll, the Tigers and the Badgers are the only ranked teams Northwestern has competed against so far this season.

In November, the Cats hosted the TYR invitational tournament at the Henry Crown Sports Pavilion and placed second overall, against tough competition from the winner Michigan State.

In December, the Cats took 11 swimmers to Greensboro, N.C., to compete at the AT&T U.S. Winter National Championship. NU had a 16th place overall team finish in the tournament, which included competitors from colleges nationwide as well as professional swimmers.

The Cats experienced multiple season-best performances at Winter Nationals. This included senior Uula Auren in the 100 breast, junior captain Van Donkersgoed in the 200 breast and senior Aaron Sears in both the 100 and 200 breaststroke events. The 4X50 relay team that is comprised of freshman Almog Olshtein, sophomore Andy Jovanovic, junior Grant Halsall and Auren also garnered a season-best for the event.

Junior Jordan Wilimovsky continued to lead the Cats this season by finishing impressively at Winter Nationals. Wilimovsky swam a 14:51.10 time for the 1,650 free, which placed him fifth nationally and the first against college-level competitors. Wilimovsky also placed 13th in the 500 free.

Olshtein has also had a successful season so far. He anchored the 400 relay that was the thrilling final competition of the TYR invitational, giving his team the win in the event by 0.33 of a second. At Winter Nationals, Olshtein experienced a season-best with a 20.10 free split in the 4X50 relay.

As for the women, NU had a huge first place finish at the TYR invitational this past November. Standout swims came from sophomores Ellen Stello, who won the 200 fly, and Lacey Locke, who won the 50 and 200 back competitions. Both traveled to the AT&T U.S. Winter National Championship this past December. The TYR win gave the Wildcats victory over a whopping six competitors, including fellow Big Ten school Michigan State.

So far in regular competition meets NU is 4-3 this season, with huge margin victories against teams such as Chicago-Illinois, Oakland and Southern Illinois. The Cats faced tough losses on the road against a ranked Wisconsin, and Missouri and Kentucky at a quad meet in Lexington, KY.

While NU only brought six swimmers to the U.S. Winter Nationals in Greensboro, NC, for this season, the squad had an impressive showing.

During a preliminary heat for the 200 butterfly, Stello shattered a 25-year-old school record set in 1989 by Lori Holmes, with a time of 1.58.28. Stello placed 13th overall in the final competition later that evening. Stello also had a career-best time in the 400 individual medley and placed 14th overall in the event, which landed her the third all-time top time for Northwestern in the event.

Sophomore Lauren Abruzzo had a season-best time of 16:22.17 in the mile, which placed her 14th overall for the event. Freshman Anna Keane also experienced a season-best time in the 50 free, shaving a half-second off her best time to come in at 23.72. Locke had a career-best time of 54.27 100 back split when she led off Northwestern’s 4X100 medley relay.

Both teams will resume their seasons on Saturday in Ann Arbor, Mich.