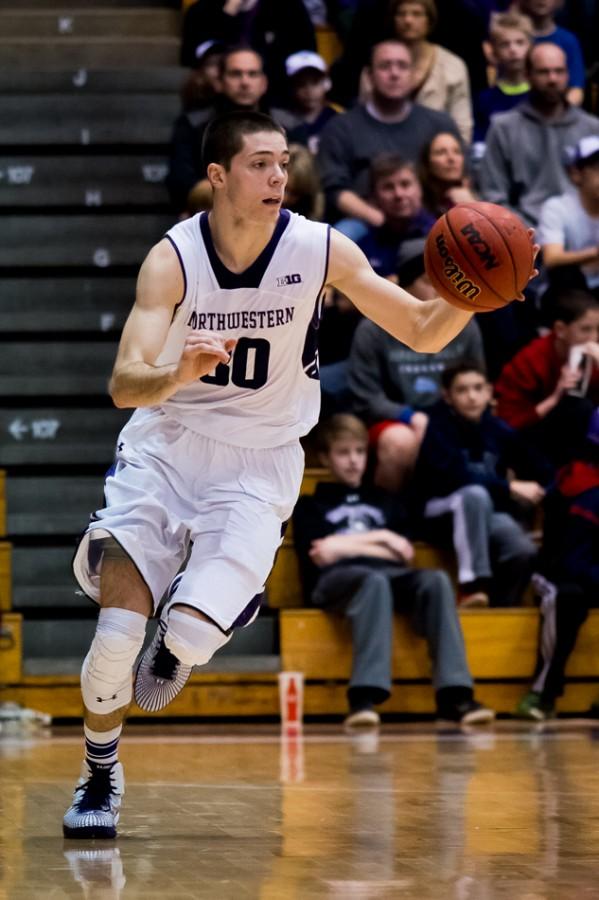 Bryant McIntosh dribbles up the floor. The freshman guard blitzed the visiting Illinois-Chicago Flames for a career-high 22 points, courtesy of a 7-of-9 performance from the field and a perfect 6-of-6 showing at the free throw line.

The Wildcats added another victory to their non-conference home stand, trumping Illinois-Chicago 63-46.

The Flames made a little run to start the second half, but NU held on. UIC had cut the lead down to as little as 7, but the Cats responded to ensure the outcome was never in doubt.

Defense was key for the Cats, as they smothered the Flames to just 17 percent shooting in the first half and a putrid 25 percent total for the game.

Olah ended with 17 points and 7 rebounds, his size creating a mismatch the Cats exploited throughout the game. Olah was NU’s trump card, as the Cats seemed to dump the ball into the post whenever the offense became stagnant.

Freshman guard Bryant McIntosh also put together a stellar performance, scoring 22 points on an efficient 7-of-9 shooting from the floor.

After Flames forward Jason McClellan knocked down a three to cut the Northwestern lead to eight, McIntosh found Lumpkin for a straightaway three to push the lead back to double digits. The Cats didn’t look back, turning the three into a 7-0 run.