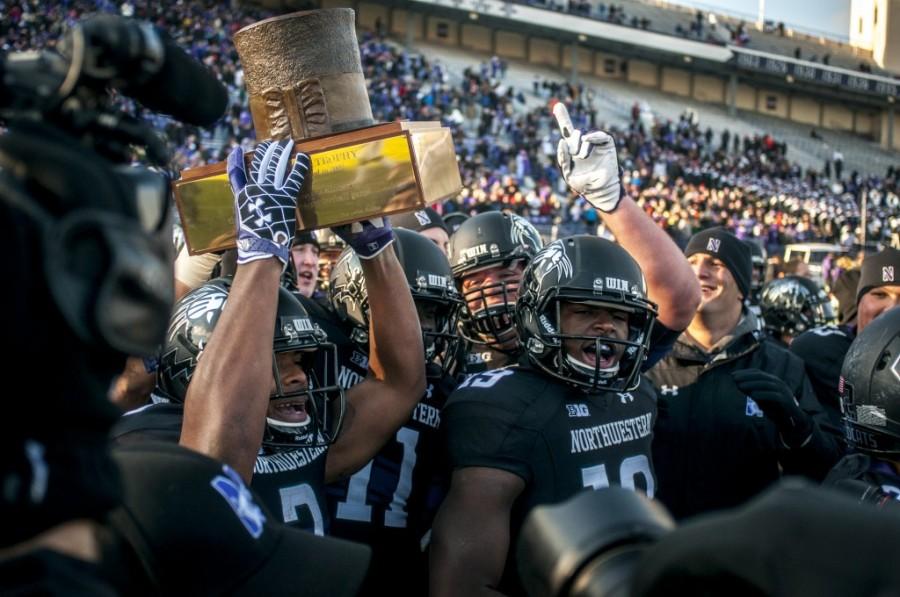 Northwestern players hoist the Land of Lincoln Trophy following the team's 50-14 defeat of Illinois in 2012. The Wildcats have defeated the Fighting Illini the past two seasons.

It has been four years since the rivalry between Northwestern and Illinois was a game of this magnitude.

In 2013, both teams were eliminated from bowl contention prior to the season finale. In 2012, the Wildcats and Fighting Illini were going in opposite directions, with NU entering the game at 8-3 and Illinois at 2-9. In 2011, the two teams met early in October rather than during rivalry week.

Not since 2010, when “College GameDay” broadcast from the scene of the game, has an NU-Illinois showdown been this important. Even that game was more about the spectacle of the stadium it was played in, historic Wrigley Field.

This year, there is no questioning the stakes. With both teams sporting 5-6 records, the winner will go to a bowl game. The loser’s season will end Saturday afternoon.

Recent history is on the Wildcats’ side. NU comes in sporting a two-game winning streak in the series and the Cats have won eight of the past 11 over the Illini.

For junior quarterback Zack Oliver, who will make his first career start, the Illini are simply another opponent.

“Coach (Pat Fitzgerald) has been calling this little streak our playoff,” Oliver said after Saturday’s win over Purdue. “That’s just the next game in the playoff.”

But the game will take on added meaning for other NU players, including true freshman running back Justin Jackson, who has his own personal experience with the rivalry. Jackson attended in-state Glenbard North High School and was recruited by both schools, taking several unofficial visits to Illinois before eventually committing to NU.

“It’s just really fun to have two in-state opponents competing for the best recruits and competing in the same conference,” Jackson said.

Junior guard Matt Frazier also picked the Cats over the Illini during the recruiting process. Unsurprisingly, he expressed no regret over his choice.

Jackson will take the field in the rivalry for the first time on Saturday. It will have been more than four years since he was a high school freshman watching that Wrigley Field game.

“I was watching like, ‘I wish I could play at one of these schools one day,’” he said. “It’s cool that it came true.”

Fitzgerald is not dwelling on the rivalry, but instead attempting to instill that playoff mentality in his team.

“We’ve been through a lot this calendar year. this team has been through a lot,” he said. “This is a big game for us. It comes down to a one-game season. … The guys need to handle that and get themselves ready to play on Saturday.”