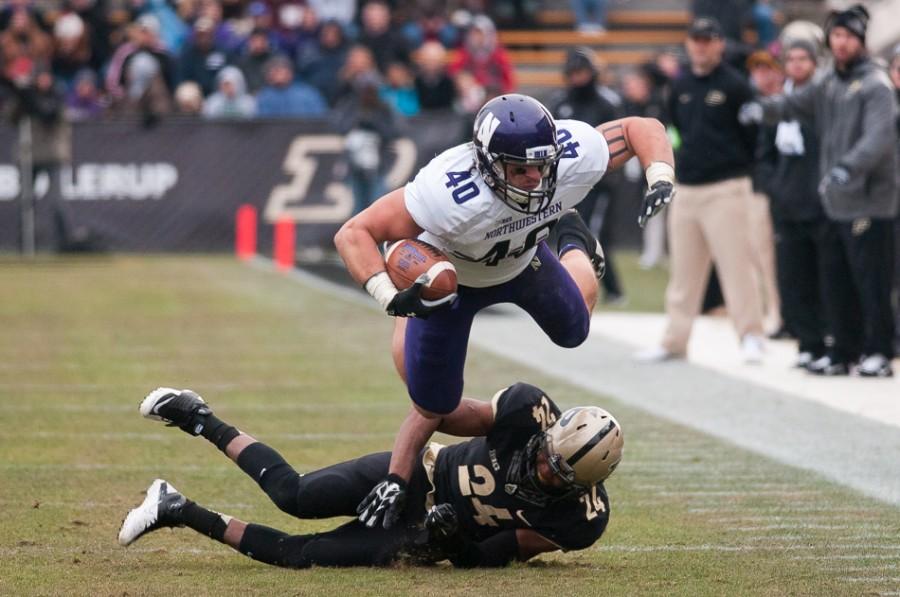 Junior superback Dan Vitale leaps over a defender after making a catch Saturday against Purdue. Vitale hauled in four catches on the day for 43 yards, including a 25-yard touchdown catch to open the scoring in the first quarter.

Saturday was the rare undramatic victory for Northwestern.

The Wildcats took a quick 21-0 lead and never really looked back.

Freshman running back Justin Jackson surpassed 1,000 yards on the season with his second touchdown of the day, which went for a career-high 68 yards. Senior Treyvon Green added 66 yards on only seven carries, including a 44-yard run.

On the other side of the ball, the Cats’ defense was fantastic. NU forced five Purdue turnovers, including a forced fumble and interception apiece for senior safety Ibraheim Campbell and senior linebacker Jimmy Hall.

Special teams contributed to the victory as well, as senior Tony Jones returned a second-quarter punt for a touchdown.

Siemian’s injury is the big thing. Though the senior hasn’t had a great season, he’s by all indications better than his back-ups.

With Siemian out, Zack Oliver piloted the offense with mixed results. The junior completed five of 11 passes for 85 yards. Redshirt freshman Matt Alviti also played in Siemian’s absence, completing his only pass attempt and rushing four times for 5 yards.

If Siemian misses next week’s game against Illinois, a game NU should win might be more difficult than it should be.

The win Saturday preserved NU’s shot at bowl eligibility. If the Cats beat the Fighting Illini next week, they will qualify for the postseason again, after missing out a year ago.

The dominance of NU’s win obviously bodes well. An upset win over Notre Dame last week plus Saturday’s blow-out suggest maybe the Cats have figured things out, albeit a bit late.

Siemian’s injury aside, NU can feel good about almost everything that happened in West Lafayette, Indiana.