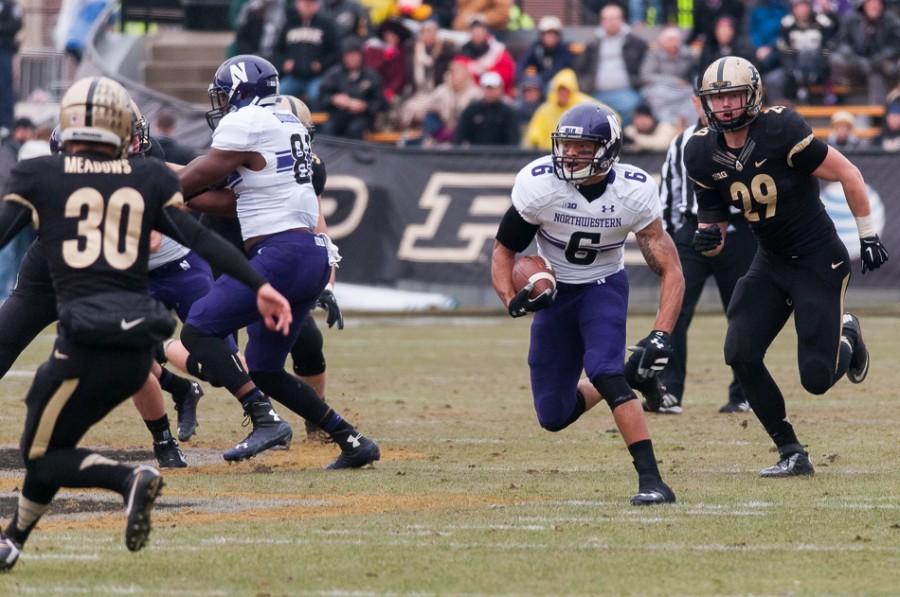 Senior Tony Jones returns a punt 64 yards for a touchdown in the second quarter Saturday. The return was Northwestern's first special teams touchdown since 2012.

It was an excellent half for Northwestern in all three facets, as the Wildcats jumped to a 24-0 lead, their largest of the season.

But the major story of the first half was the leg injury that knocked senior quarterback Trevor Siemian out of the game. The injury occurred early in the second quarter on a fourth-down quarterback sneak.

In Siemian’s stead, junior Zack Oliver and redshirt freshman Matt Alviti tag-teamed on a 37-yard drive that ended with a missed field goal, then failed to pick up a first down on the next drive.

Before Siemian’s injury, NU was humming.

The offense marched to two first-quarter touchdowns, one a 25-yard pass from Siemian to junior superback Dan Vitale and the other a 9-yard run by freshman running back Justin Jackson. Siemian was 7-of-12 for 93 yards with a touchdown and an interception before the injury.

The Cats’ defense kept the Boilermakers off the scoreboard until less than a minute remained in the half, holding Purdue to only 131 yards in the half and forcing four turnovers.

One of those turnovers, a fumble forced by redshirt freshman linebacker Anthony Walker, resulted in a 32-yard Jack Mitchell field goal to give NU a 24-0 lead.

Senior Jimmy Hall was responsible for two of the other turnovers, intercepting a deflected pass on Purdue’s first offensive drive and both forcing and recovering a fumble two drives later.

Purdue drove 75 yards in 12 plays to score a touchdown right before the half.