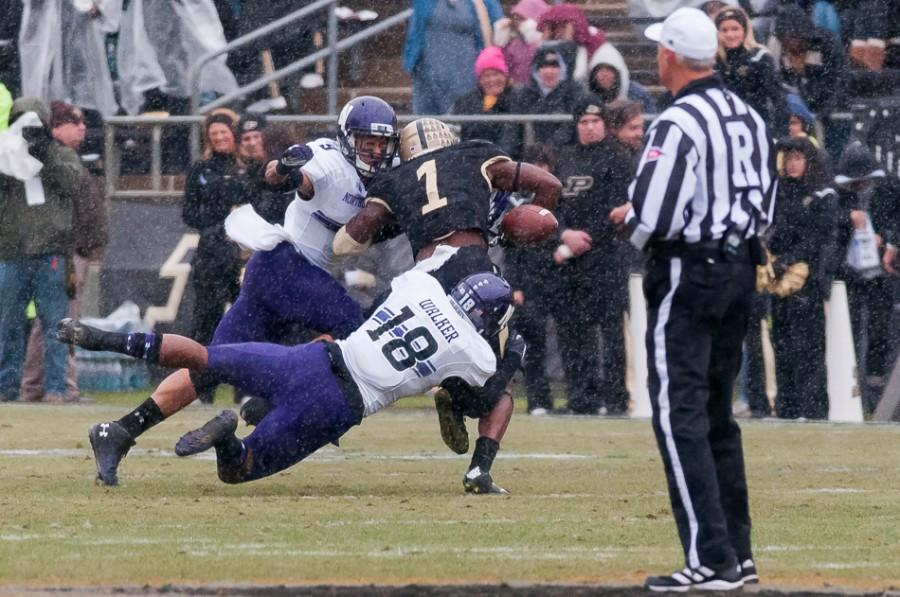 Senior linebacker Jimmy Hall forces a fumble as Anthony Walker wraps up Purdue's Akeem Hunt during Saturday's victory over the Boilermakers. Hall added an interception on Purdue's first offensive drive as the Wildcats' defense held Purdue to only 14 points.

WEST LAFAYETTE, Ind. — It was costly, but Northwestern is one win away from bowl eligibility.

The Wildcats (5-6, 3-4) jumped out to an early 24-0 lead and then iced the game in the second half after senior quarterback Trevor Siemian left with a left knee injury, ultimately defeating Purdue (3-8, 1-6) 38-14 on Saturday at Ross-Ade Stadium.

“We needed to start fast today, and I thought the guys came out ready to go,” coach Pat Fitzgerald said. “Like it has been with everyone else that’s gone down, you’ve got pick up the flag and move on.”

Fitzgerald said after the game it looked like Siemian’s injury was “pretty serious” and he will be reevaluated on Monday.

After the teams traded interceptions on the game’s first two possessions, NU marched 77 yards in three plays, with Siemian hitting junior superback Dan Vitale from 25 yards out to open the scoring. A 9-yard run by freshman Justin Jackson and a 64-yard punt return from senior receiver Tony Jones pushed the Cats’ lead to 21-0 by early in the second quarter.

Meanwhile, the Cats were standing tall on the other side of the ball, forcing three turnovers and two punts on Purdue’s first five possessions. It was a return to form for the defense, which surrendered 40 points to Notre Dame last week. The Cats allowed just 312 yards and 14 points, the last 7 of which came after the game was already decided.

Young and old led the Cats on the day, with senior safety Ibraheim Campbell flying around to stop the run and redshirt freshman linebacker Anthony Walker living in Purdue’s backfield. Walker and Campbell led NU with nine and eight tackles respectively, while Walker added 1.5 sacks and a forced fumble and Campbell notched an interception, two pass breakups and a forced fumble of his own.

“It was just great all-around defense today,” Walker said. “Everybody stepped up and made plays, we had a lot of turnovers. We just came in with that mindset that we weren’t going to be denied today.”

NU’s offense slowed down once Siemian left, but junior Zack Oliver and redshirt freshman Matt Alviti — bolstered by a strong running game — did enough to ice the game with two second-half touchdowns.

Jackson once again paced NU’s offense. The true freshman scored twice and rushed for 147 yards, including 68 on a fourth-quarter run that put him over 1,000 for the season. Jackson is now at 1,057 yards on the year.

On the 68-yard run, his longest of the season, Jackson ran to the right, beat Purdue’s safety, and only saw green space in front of him.

The Cats return home next week for the regular season finale against Illinois. The rivalry matchup for the Land of Lincoln Trophy will take on a little extra significance this year, as both teams enter the game with five wins, each needing a sixth to reach bowl eligibility.

Jones said word spread throughout the locker room after the game that the Fighting Illini had beaten Penn State, setting up a high-stakes battle next week.

“We heard,” Jones said. “Outside of the fact that it’s a rivalry game, both teams are playing to keep their season going.”

That NU is even in that position is thanks to a resurgence the past two weeks. Coming off the dramatic upset of Notre Dame, the Cats took care of business, putting together their most complete performance of the season.

Oliver, who appears likely to start that deciding game, said he won’t let the pressure get to him.

“It’s not going to change anything I do,” he said. “Every week I come to practice, so it’s going to be the same next week. We’re going to show up on Monday, look at Illinois, see what they’re doing, then we’re going to prepare and hopefully get a win next week.”