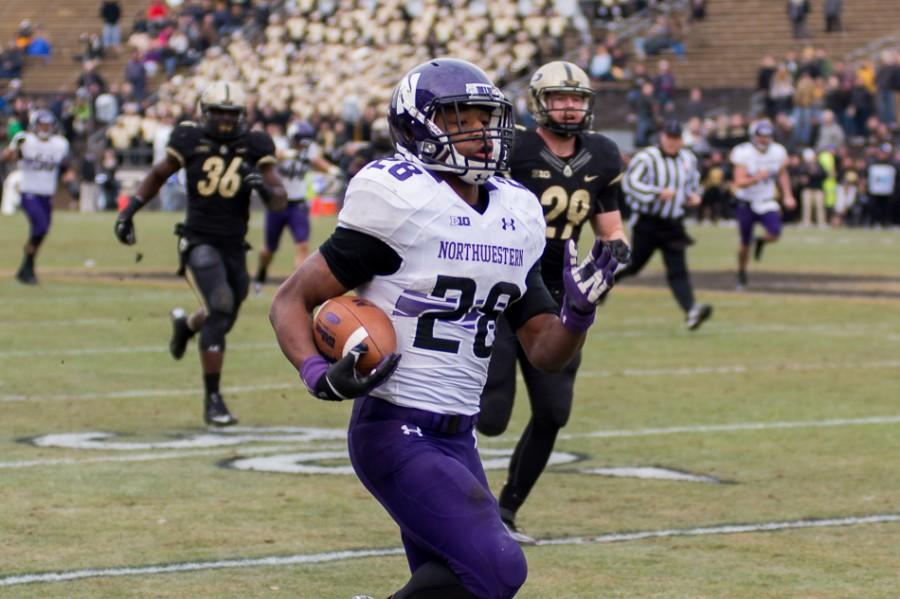 Freshman running back Justin Jackson heads for the end zone on his longest run of the season, a 68-yard dash in the fourth quarter. Jackson eclipsed 1,000 yards rushing on the season after running for 147 yards in Saturday's victory over Purdue.

WEST LAFAYETTE, Ind. — Freshman running back Justin Jackson surpassed 1,000 yards rushing on the season with a 68-yard touchdown in the fourth quarter of Northwestern’s game against Purdue on Saturday.

Jackson became only the second player in program history to surpass the milestone in his freshman season, after Tyrell Sutton gained 1,474 in 2005.

The freshman said the 1,000 yard barrier was something the running back room had discussed during the week. Surpassing the number was, “a pretty special feeling,” he said.

After starting the season as the Wildcats’ backup, Jackson quickly seized the feature back role. He rushed for more than 100 yards in three straight games — all against Big Ten opponents — in October, including a career-high 162 in an upset of Wisconsin. Last week against Notre Dame, Jackson gained 149 yards and scored a touchdown.

Jackson entered Saturday with 910 yards and six touchdowns on the season. He added a seventh touchdown in the first quarter against Purdue and surpassed 1,000 yards on his eighth. The 68-yard scamper gave him 1,057 yards on the season.

“Justin’s played well all year,” coach Pat Fitzgerald said Saturday. “He’s still got things to clean up in his game, but to see a young man like that step up like that … I’m really proud of the way Justin’s playing.”