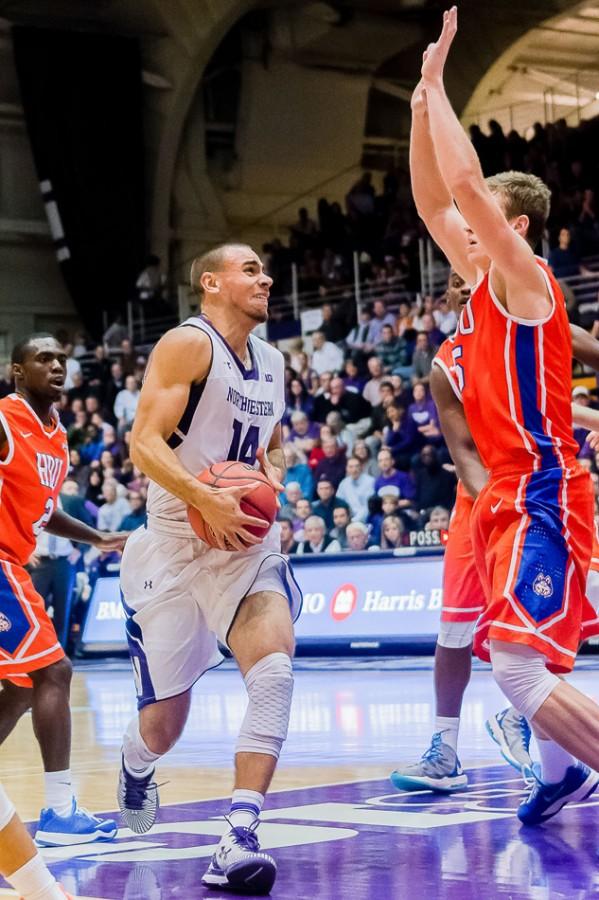 Junior guard Tre Demps drives to the basket. Demps hit a game-winning shot in the waning seconds of Northwestern’s 69-67 win over North Florida.

With just 3:06 left to play, North Florida’s Beau Beech knocked down a layup to give his team a 63-57 lead over Northwestern. The Wildcats were in hot water and needed a spark.

And they got just that.

It started with freshman Bryant McIntosh, who knocked down two timely threes and a layup, and ended with junior Tre Demps, who drilled the go-ahead jumper with 2.1 seconds left. One North Florida miss later and the Cats were winners, 69-67.

The Cats weren’t perfect by any means, but they did just enough to beat the Ospreys and move to 3-0 in the season.

“That was a heck of a game,” coach Chris Collins said to open his postgame press conference.

Collins said his team needed to defend better, but was quick to give credit to North Florida as well.

“A lot of the things that we didn’t do as well or struggled with tonight was not because of us, it was because of them,” Collins said. “There’s a reason they’re predicted to challenge Florida Gulf Coast in their league.”

It was a close contest throughout, with the largest lead for both teams being just 7 points. However, the Ospreys did have their 7-point lead and the momentum with just 3:55 left in the game.

But it was the clutch play of Demps and McIntosh that stuck out Thursday.

“He’s fearless,” Collins said of Demps. “Tre was the kid that hundreds and hundreds of times, I can imagine him counting the clock down in his backyard and taking the final shot. That’s what he does.”

Collins also had high praise for McIntosh, calling him a winner and comparing him to former Duke guard Jon Scheyer.

“I like that comparison,” a smiling McIntosh said. “I really appreciate it. Jon was a national champion, and that’s the biggest goal for everyone.”

McIntosh led the team with 16 points on the night, and sophomore forward Sanjay Lumpkin added 13 points and six rebounds. Demps, the hero of the night, had 11 points in the second half and finished with 15 overall.

“You’ve got to thank your teammates first, that they trust you with that opportunity,” Demps said. “When you have guys that believe in you, it gives you the confidence to do it yourself.”

The Cats have a quick turnaround coming up, with another game in Evanston against Elon University on Saturday and then a trip to Puerto Aventuras, Mexico for the remainder of the Cancun Challenge.

“We’ve got to move forward,” Collins said. “We’re in a tough stretch right now. Guys have got to get rest, and we’ve to got to get on to the next thing.”