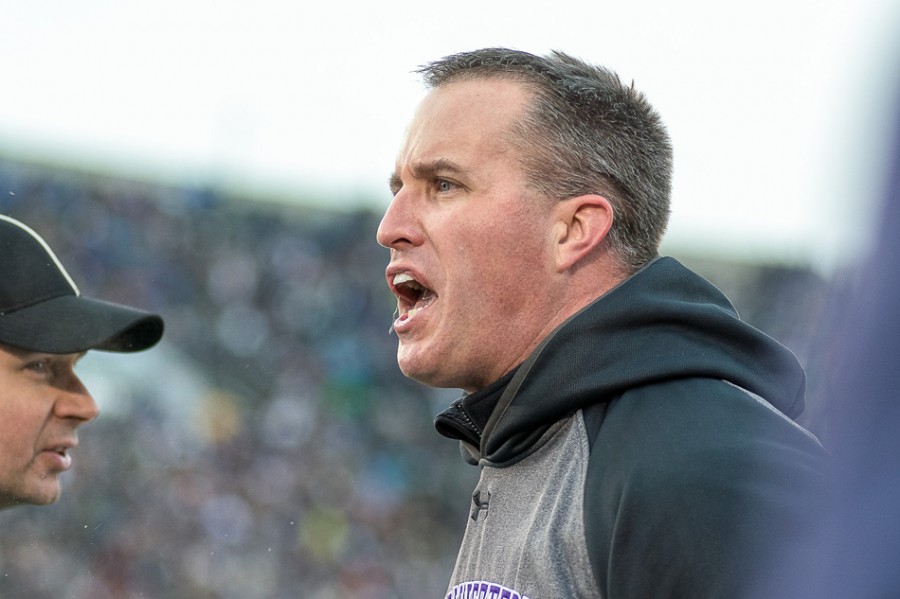 Coach Pat Fitzgerald has not been pleased with his team’s maturity this season. Fitzgerald said he blames the recruiting process for inflating players’ egos.

All season, coach Pat Fitzgerald has alluded to “maturity” issues when diagnosing Northwestern’s on-field struggles. After practice Wednesday he addressed the subject in more detail.

“It has to do with guys that I think did not realize how close they were to playing,” Fitzgerald said. “And because of where we’re at depth-wise, they’ve been thrust into roles.”

One root of that “immaturity,” the coach theorizes, is the rise of online recruiting sites that write about players before they reach college. In recent years NU has attracted recruits with higher national profiles, drawing “four-star” recruits to Evanston at a much higher rate than ever before.

As Fitzgerald sees it, players come in overconfident, feeling they don’t need to work as hard as they should.

“Just because you read so many articles about you on a dot-com site in high school doesn’t mean you’re going to be a good college player,” Fitzgerald said. “I’m kind of tired of it.”

“It’s getting worse every year,” he continued. “And it’s across the country. I talk to guys all over the country it’s the same problem. Guys are getting so much smoke blown up their rear ends that they don’t understand how hard it is to work, to win, to be successful on an every-play basis.”

In the past, Fitzgerald has shied away from playing true freshmen but this year has relied on running back Justin Jackson, tight end Garrett Dickerson and defensive end Xavier Washington. Meanwhile two redshirt freshmen, safety Godwin Igwebuike and linebacker Anthony Walker, have received substantial playing time, and others have assumed prominent back-up roles.

Younger players have seen increased roles on the Cats’ depth chart for two reasons: 1) Injuries have created lineup holes on both sides of the ball and 2) Recruiting more talented players means having young guys who, in theory, require less development.

Of course, NU isn’t the only school to play highly ranked recruits right away, but it is less experienced in integrating talented freshmen than schools that have traditionally excelled in recruiting. Fitzgerald acknowledged that the coaching staff hasn’t done a good job ensuring these young players possess the proper maturity.

“Defensive line-wise we always have homework on Monday to look at the opponents’ top runs, and every week they’ve done them,” Carter said. “The defensive line young guys are doing well. They’re mature.”

Though the concept of a “trap game” or “letdown game” is somewhat dubious statistically, it’s possible a team that struggles to focus week-to-week would come out flat after being celebrated all week.

“Some guys got like 50 text messages after the game on Saturday talking about how good we are,” Carter said. “Even around campus we’ve got some students saying ‘Oh you’re so good,’ when last week they were saying whatever about us.”

“We’ve got to get that complacency out of us.”

Fitzgerald said competition is key to players’ development, humbling them a bit and motivating them to focus snap after snap. NU’s maturity problems, the coach said, will be settled in the off-season when everyone is healthy and playing time is up for grabs.

Fitzgerald said he and the coaching staff haven’t been fueling any egos and won’t start now.

“They’re not getting smoke blown from us,” he said.