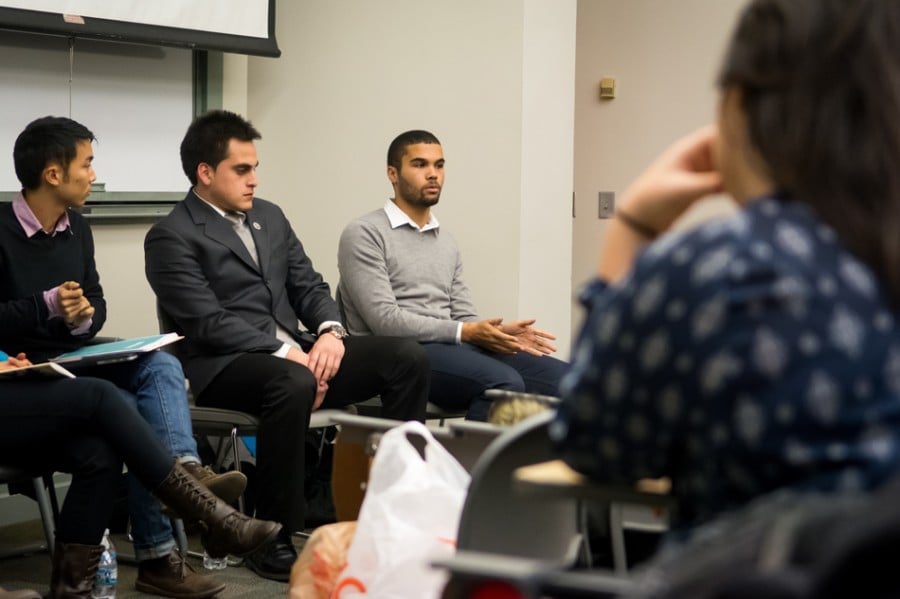 Michael Martinez, a co-founder of hip-hop group Don’t Only Just Observe, speaks about the importance of music in communities at a panel event hosted by Northwestern Community Development Corps. The panelists were all members of organizations that promote music, writing and art.

About 25 people attended the event in University Hall. The panel comprised professionals, NU undergraduates and graduate students, all of who are members of organizations that promote music, writing and art in different communities.

“When we work with communities where music is really important, we remember how much of a positive impact it can have,” said Daniel Flores, a first-year Kellogg student on the panel and a founder of Mariachi Northwestern.

The panelists spoke about how working with communities, both on and off campus, has enabled their organizations to better themselves. Ebele Onyema, Youth Organizations Umbrella coordinator at Evanston Township High School, said she believes the partnership between NU students and Y.O.U. has bettered the Evanston community.

“Bringing people from NU to Evanston Township High School has created conversations and better perceptions of cultures that high school students may not have in their homes,” Onyema said.

The panelists also discussed the importance of passion in developing organizations oriented to help the community. Michael Martinez, a McCormick sophomore and co-founder of Don’t Only Just Observe, described the process the hip-hop freestyle group underwent before focusing on their main mission.

“We wanted to wait and establish our own identity before we started working with other people in order to distinguish ourselves from other groups,” Martinez said.

He mentioned that the unique and open nature of his group allows the organization to collaborate with many campus groups and give them a sampling of the role of hip-hop in communities.

“It’s important to see some sort of relation between your organization’s mission and the community you want to work with,” he said.

Although the hour-long discussion was mostly devoted to panelists answering questions, they also asked the audience a few questions about their passions and ambitions.

“All students have the potential and the education to make possible organizations realities,” said panelist Sarah Choi, a volunteer coordinator for nonprofit Academy of Music and Arts for Special Education. “All you need is a group who has the same dream and initiative. You have the power to put it all together.”

The panel also featured Alex Qin, a Weinberg-Bienen junior and president of NU’s chapter of AMASE Northwestern, and Alanna Hickey, a fifth-year graduate student who works with Y.O.U. Evanston.

Following the panel, each member hosted a breakout session. Participants were able to take part in writing, freestyle rapping and other music workshops.

NCDC committee member Jessica Lewis said the group wanted to focus on promoting community on campus as well as in Evanston and Chicago.

“The panelists did a great job expressing how music and art are just two of the many ways we can engage with different communities on and off campus,” said Lewis, a Weinberg sophomore.

Meron Tsegai, who attended the event and took part in a breakout session, said she believes the expression aspect of music and art is integral to strengthening communities.

“I didn’t consider it at first, but music and art can really push people to step out of their comfort zones,” the Weinberg sophomore said. “While I was attempting to freestyle, I didn’t realize how it would push me to express myself. Through music and art, you’re able to express your personal self and get closer to those around you who are doing the same.”