Men’s Soccer: Wildcats ready for Cougars in first round of NCAA Tournament 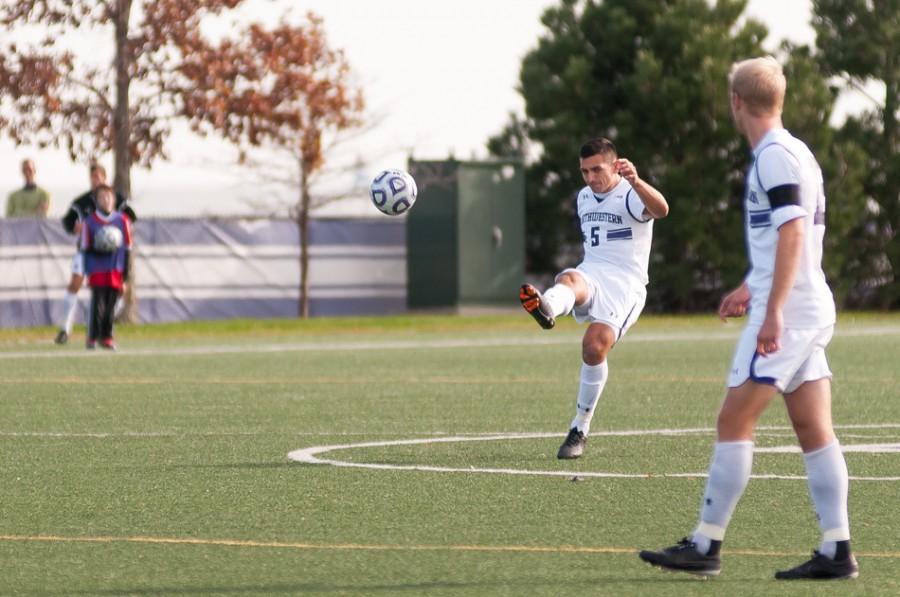 Nikko Boxall plays a ball forward. The senior centerback was named Big Ten Defensive Player of the Year for his role in leading the Cats’ stingy defense.

“We’ve got a great group of guys with a lot of good chemistry on and off the field,” senior goalkeeper Tyler Miller said of the team’s chances looking ahead. “We’ve had a great season so far, and we’re really looking forward to continuing it.”

The Wildcats qualified for the tournament, receiving one of 24 at-large bids, despite losing in the quarterfinals of the Big Ten Tournament. They are undefeated at home and hope to continue the streak against the in-state rival Cougars that qualified for the NCAA Tournament by winning their conference championship.

SIU-Edwardsville forward Christian Volesky has scored eight goals and contributed four assists this season and is a potent threat that the NU defense will be looking to shut down. But he also has the joint-lead for the Cougars in another statistical category: Volesky has five yellow cards this season.

Offensively, he has put 37 shots on goal this season, more than double NU’s leader in that statistic, junior forward Joey Calistri.

Calistri has also been the Cats’ biggest offensive threat in terms of goals scored this season, though he has not quite hit the scintillating heights he reached last season when he scored 12 goals. Even though this year he’s scored just half the amount, other players have taken an important role in the offense, including junior midfielder Cole Missimo. The Dallas native has been clutch this year, scoring 5 goals — 4 of them game-winners — and has been all over the place on offense for the Cats this season.

But the real story for NU this season has been its defense. Two Cats earned some of the conference’s highest honors. Miller was named the Big Ten Goalkeeper of the Year, while senior defender Nikko Boxall was declared the Big Ten Defensive Player of the Year. These two have anchored an NU defense that has the fourth-best goals against average in the nation.

“I’ve got to give credit to the guys I’m working with,” Boxall said. “I’ve got a great back four. … It makes my job easy when they’re so good to work with. It gives you confidence having Tyler (Miller) behind you.”

Miller and the defense have only conceded 11 goals this year, six of which have come from penalties or as a direct result of a penalty kick. Additionally, the Cats were knocked out of the Big Ten tournament against Indiana in a penalty kick shootout. Miller said he and the team have been cognizant of the threat of the shootout especially.

“We really want to be confident when we’re going into penalty kicks,” he said. “It’s important to know who your shooters are and try to do as much research on the other team as you can, but we’re going to try to win the game in regulation.”

NU has arguably had a more difficult schedule than SIU-Edwardsville, which has not defeated a ranked team yet this season, coming just one point off of the top of the conference final regular season standings in a very strong Big Ten. The conference contributed the second-most teams of any conference into the NCAA tournament, only one off of the leading ACC. But coach Tim Lenahan said despite the results the Cougars have had this year, they “outplayed” some of their opponents.

“They have really been one of the hottest teams in the country,” he said. “This is going to be a really good team. They know how to attack and keep the ball well.”