Football: Writers ruminate on where the Wildcats stand 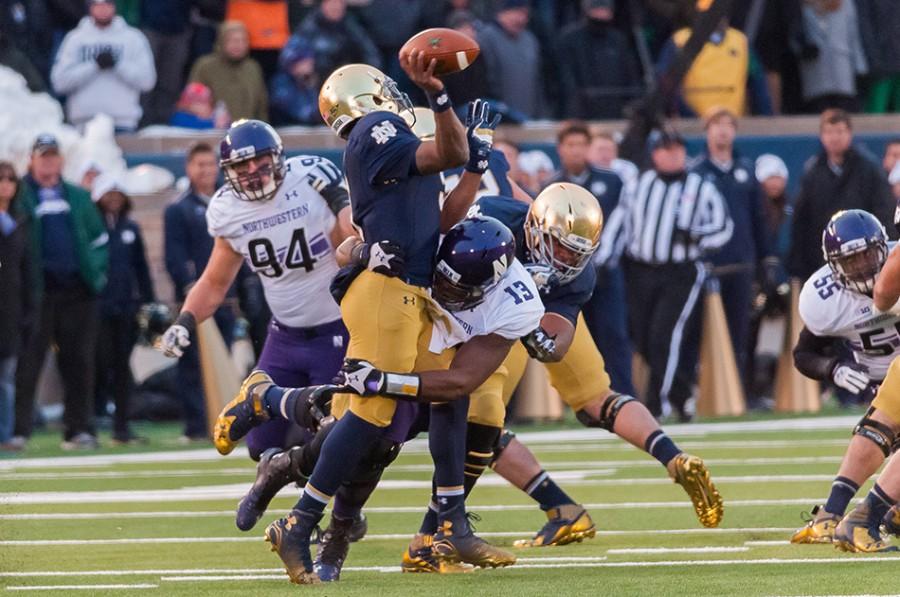 The Daily’s Joseph Diebold and Bobby Pillote exchange emails about the Northwestern football team, coming off a shocking win at Notre Dame on Saturday. The Wildcats have two games remaining, this coming Saturday at Purdue and a week later against Illinois.

DIEBOLD: Northwestern jumpstarted its season Saturday with a 43-40 upset win over Notre Dame. It was everything the Wildcats hadn’t been this season, particularly exciting and full of offense. I’m most curious about that last part. Bobby, you’ve written a lot about the struggles on offense this season. We now have five quarters, dating back to the last two drives against Michigan, of above-average offensive play from a team that hadn’t scored more than 30 points all year before Saturday. Do you see that continuing in the last two games of the season?

PILLOTE: It’s a shocking performance from the Cats, especially against what was probably their toughest opponent of the season, but there were plenty of signs that point toward sustained success for the remainder of the season. Senior quarterback Trevor Siemian looked sharper and more mobile than he has all season, and also had a greatly improved offensive line blocking in front of him. The offense looked simplified, with coordinator Mick McCall implementing some old-school mesh route combinations — a hallmark of the spread offense — to get his receivers open. The fact that senior wideout Tony Jones dropped three probable touchdowns is a testament to that improved scheming.

All the pieces are there, but I’m worried that one of these next two contests could turn into a so-called “trap game.” With a bowl game now clearly within reach, do you think the team can stay focused on the next two games ahead?

DIEBOLD: It’s always hard to predict how college students’ mentalities will be week-to-week, but while this is the type of game that would be prime for a letdown spot, I’m not sure it will affect NU for a couple reasons. The Cats, at 4-6 on the year, aren’t the type of team that will necessarily be getting other teams’ absolute best efforts. I’m sure Purdue will come out and play hard, but the Boilermakers won’t be gunning for NU in the way they would against Ohio State or Michigan State. And for all of coach Pat Fitzgerald’s weaknesses in scheme and game management, the one thing I fully trust him to do is keep his team motivated and playing hard. I think this team knows what it still has to play for this season and the effort will be there. The question, as it has been for most of the year, is whether the execution will be there to match.

Let’s flip to the other side of the ball. The Cats weren’t awful defensively against Notre Dame, especially given the Fighting Irish’s explosiveness, but giving up 40 points in a game where they forced four turnovers, including recovering two fumbles inside the five-yard line, isn’t great. Where did you see breakdowns from NU defensively? Or are Everett Golson, Will Fuller and company just that good?

PILLOTE: Golson and Fuller are very good, but the defense definitely wasn’t playing up to its ability. Junior safety Traveon Henry in particular struggled, repeatedly taking bad angles on tackles. He was injured late in the game and replaced by redshirt freshman Godwin Igwebuike, who has already proven his worth this season. I wouldn’t be surprised to see Godwin in more regularly for the rest of the season.

Schematically, the defense also played a Cover 3 for most of the game instead of its usual Cover 4. I don’t think that was the reason for their struggles, but it certainly was an interesting wrinkle.

Assuming the Cats can win the next two games and make it to a bowl, do you think that redeems the season? The win over Notre Dame is obviously huge for the program and a big relief for fans, but those two bad early-season losses to Cal and Northern Illinois still have me questioning the overall consistency of Fitzgerald and his staff.

DIEBOLD: Yeah, it was interesting to see Igwebuike come in instead of Kyle Queiro, who is listed as Henry’s backup. I’m sure his experience replacing Campbell earlier in the season helped in terms of developing trust, and he certainly acquitted himself nicely. The Cats lose Ibraheim Campbell after the season, but the experience some of the younger guys have gotten this year means the future is bright in the secondary, even if Henry moves to linebacker, as some have speculated.

The season as a whole I think will be defined by these next two or three games, but while some of the Big Ten losses are explainable, the program really needs to reevaluate the way it prepares for the season. NU looked so flat in those season-opening losses, especially getting shut out in the first half against Northern Illinois, and while nonconference performance doesn’t impact the team’s ability to compete for conference titles, it’s a huge part of the state of the program as a whole. The Cats are on track to finish 4-4 in the Big Ten, a respectable record, but that would look a lot different at 8-4 overall instead of 6-6. If NU is going to continue to schedule competitive peer schools instead of lower-division patsies, it needs to come out of the gate faster. Stanford comes to Ryan Field to start next season. If whoever takes over for Siemian isn’t ready right away, that could get ugly.