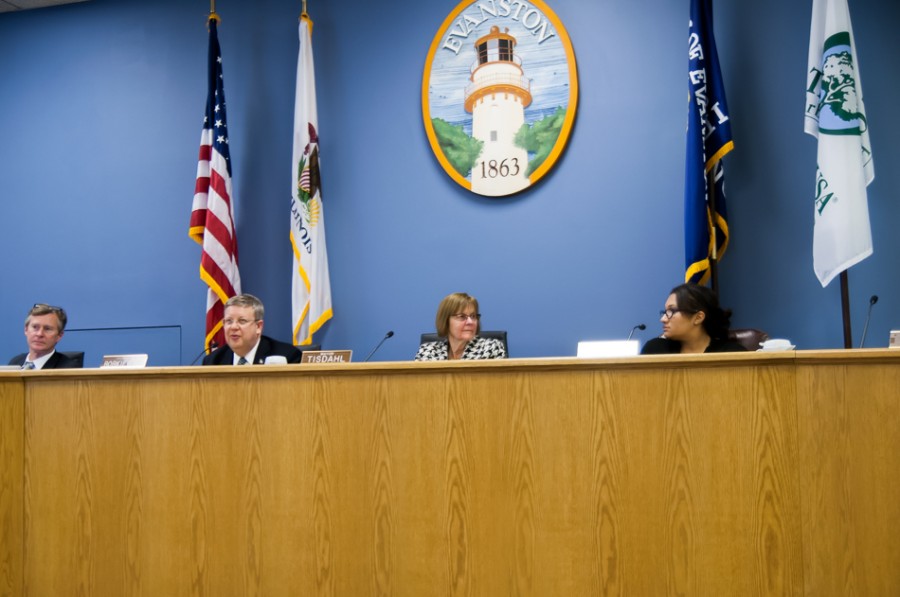 City Council discusses Evanston’s participation in the Divvy bike sharing program. Aldermen passed a resolution Monday night to accept participation and talked over the implementation of the 2015 plastic bag ban.

Council voted Monday to participate in the Divvy bike-share service, though some aldermen voiced concerns about the program.

The resolution authorizes city manager Wally Bobkiewicz to negotiate an intergovernmental agreement with Chicago on how to implement the program, which provides residents with bicycle stations set up around the city. Aldermen passed the resolution 7-1, with Ald. Don Wilson (4th) dissenting.

Evanston will install eight Divvy docking stations starting in spring 2015 with a grant from Illinois Gov. Pat Quinn, which was announced in September. On the same day, Mayor Elizabeth Tisdahl also announced that Divvy, started in 2013 by the Chicago Department of Transportation, would be coming to Evanston.

“It’s a really good opportunity to get more people riding bikes in that short commute from one part of downtown to another part of downtown,” Ald. Coleen Burrus (9th) told The Daily on Monday. “I have friends that live in the city of Chicago who use it all the time to commute because you’re not having to chain a bike at a Metra station or the CTA and then riding it somewhere else.”

Funding from the state will provide 70 new bike-share stations in Illinois, said Catherine Hurley, the city’s sustainable programs coordinator. Eight stations will be in Evanston, 50 will be in Chicago and 12 will be in Oak Park, with each community responsible for its own cost share, a number that is proportional to how many bicycle stations the community will be granted, she said.

Evanston’s cost share, which will cover the equipment and installations of the stations, will be $80,000, and the net cost for operating the program in Evanston will be $66,600. The total expected cost of launching Divvy in Evanston is estimated to be $146,600.

Some aldermen expressed concerns with the bike-sharing program. Wilson said when he first heard about the concept, he was really excited for it to come to Evanston. Since then he has become increasingly disappointed with the way the service has evolved and its proposed cost, he said.

In addition, in order to make sure each Divvy station always has a bicycle, trucks must drive around carrying bicycles from certain stations to others, Wilson said. From an environmental standpoint, this negates the purpose of the Divvy program, he said.

“I think our staff has done an excellent job given the constraints of what the product is,” Wilson said, “and we don’t have any ability to negotiate. It is what it is.”

Ald. Judy Fiske (1st) said she also wanted to make sure the public is aware of how much it could cost them if they go beyond the 30-minute limit allotted to them for riding.

Ald. Peter Braithwaite (2nd) said he was concerned with the locations of stations around Evanston Township High School.

“I want to watch this and I see the potential for it,” he said, “but I really want to pay attention to it in the event that some locations don’t work and in the event that you’re overcrowded at some stations.”

Hurley spoke to council about a proposed framework for acquiring sponsors in the community and about the process of finalizing the locations of the bicycle stations.

“Most of the goals of having sponsors or financial partners include building wider community support … highlighting local organizations — there’s good branding and marketing opportunities — and offering multiple levels of participation,” Hurley said.

Hurley said city staff will be able to collect data about where participants start and end their bicycle rides. She suggested re-evaluating the data at the end of the first warm season.

Council also discussed the implementation plan for the plastic bag ban, which goes into effect on Aug. 1. Aldermen passed the ban in July, requiring city businesses larger than 10,000 square feet to eliminate their plastic bag use in 2015. A group of 27 businesses will be affected, including CVS pharmacy, Whole Foods and Jewel-Osco.

Hurley said it is important to increase the public’s access to reusable bags. A cost-effective way to do this is to implement a bag-sharing program, called Share-A-Bag, for people to give away their reusable bags for others to use them, she said.

Sustainability hub locations, such as the Ecology Center, the Noyes Cultural Arts Center and the Levy Senior Center will also make it easier to recycle plastic film within the community, Hurley said.

Hurley also spoke to council about different initiatives staff will do in the quarters leading up to the day of the official ban, including the Share-A-Bag program, education and outreach around Earth Day and coordination with Chicago as its plastic bag ban comes into effect in August as well.

At the end of the discussion, Bobkiewicz said the city will mainly rely on the Share-A-Bag program in order to provide residents with reusable bags.