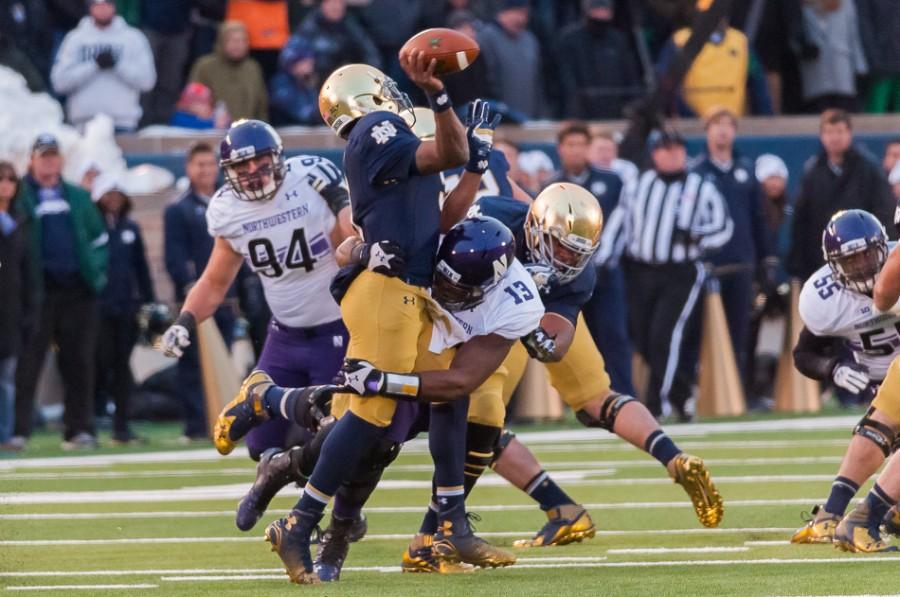 SOUTH BEND, Ind. — Northwestern played one of its best halves of the season, but it could have been even better if not for some self-inflicted wounds.

The Wildcats got a big stop on defense heading into the half when Kyle Brindza missed a 38-yard field goal that could have extended the Fighting Irish’s 27-23 lead. NU will receive the ball on offense to start the second half.

The Wildcats’ offense clicked in a way it rarely has this season, with NU notching its first two runs of more than 40 yards of the year and gaining 298 total yards. Senior quarterback Trevor Siemian got much better protection from his offensive line and completed 15 for 25 passes for 149 yards. Siemian’s statistics could have been even better if not for a slew of drops, including three from senior receiver Tony Jones that could have gone for touchdowns. Siemian also threw an interception in the end zone with a chance for NU to retake the lead near the end of the half.

On defense, the Cats played an up-and-down half, surrendering a 61-yard touchdown run to Notre Dame quarterback Everett Golson on the fourth play of the game and giving up two other long scoring drives. But Anthony Walker handed the offense a short field with a long interception return and Nick VanHoose earned the Cats two points by blocking an extra point and returning it to the house.

NU has done well so far to hang with a talented Fighting Irish team. The Cats must make better adjustments than they did against Nebraska, when a 17-14 halftime lead quickly snowballed into a 38-17 defeat.