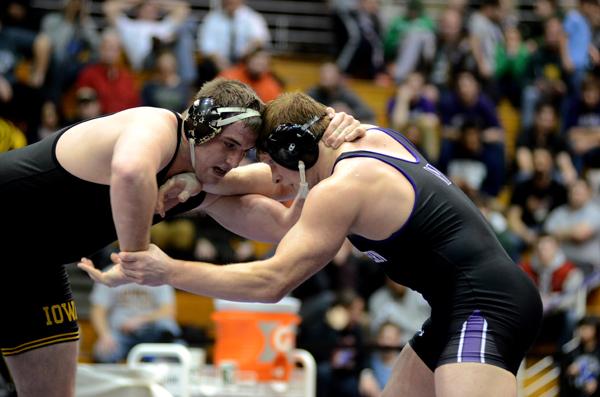 After a successful opening meet against Stanford, No. 18 Northwestern returns to action Saturday in Ypsilanti, Michigan, to take on three teams at the Eastern Michigan University Duals.

First, the Wildcats battle Eastern Michigan at 9 a.m. before squaring off against Clarion at 10:30 a.m. NU takes on Central Michigan at 1:30 p.m.

Although the Cats performed well against the Cardinal last weekend, coach Drew Pariano said his team didn’t dominate the way it could have.

“We’re not gonna mince our words,” he said. “If we’re happy about something, we’ll say it. If we’re not happy about it, we’ll be very upfront. We want to see improvement from last weekend to this weekend, meaning better technique, a little better shape, opening the gap on our opponents.”

Pariano said this weekend is a good barometer to see where his team is.

“The duals happen pretty quickly, so shape will be a key component,” he said. “We feel like we’re in pretty good shape as a team.”

NU will need to be in good shape if the team plans to meet its season goals. Pariano, McMullan and freshman Bryce Brill set the bar high for their objectives.

“I’ve got to win nationals,” McMullan said. “I’ve gotten close, and that’s what I’ve got to do. I beat the guy who won nationals last year a couple weeks ago, so I know that I can get there. It’s just a matter of putting it together at the end of the year for me.”

As for Pariano’s team plans, he said he wants to be a top-four program in the country. If the team progresses as he expects, with its young talent and senior leadership, he said it should improve after every meet and achieve its goals.

“It’s a long season,” Pariano said. “March is a long way away, but our guys need to understand the process, and that process is getting better every week.”

Brill, a three-time Illinois state champion in high school, just wrestled his first college bout ever: a 7-0 shutout over Stanford’s Maxwell Hvolbek. Even so, his expectations are set high.

“I’m definitely looking to win a national title this year,” he said. “We’ll see how it goes, but I’ll just keep working hard, and if I do that then the winning and losing will take care of itself.”

Still, Brill’s journey to the top won’t be easy. McMullan can relate to what the freshman will go through.

“It’s a tough transition coming from high school,” McMullan said. “There, you’re a big fish, small pond kind of guy. Then you get into D1 wrestling where everyone’s kind of a success in high school, and now you’re wrestling tough guys every week.”

Pariano is excited about the team’s newcomers.

“We have an extremely talented freshman class,” he said. “Bryce (Brill) did a great job stepping into the starting lineup, but there are a couple of guys you might see do some great things in tournaments this year.”

But the first meet was no cakewalk for Brill though. It was his teammates that helped him pull through.

“At first I was pretty nervous going into it,” Brill said. “But I was talking to the guys before, and they were just telling me to relax, that it’s just like any other match and to just go out there and wrestle the same that I do in practice. It definitely helped. The guys were behind me and the coaches were behind me.”