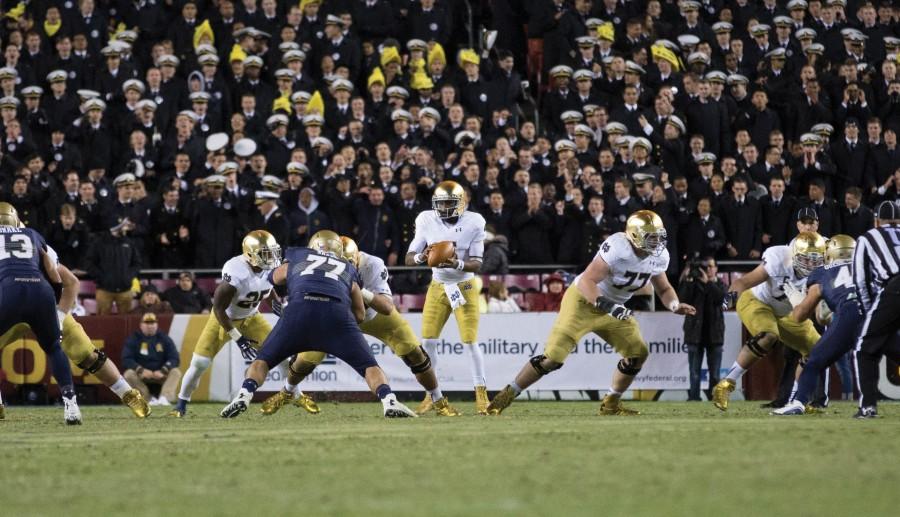 Notre Dame quarterback Everett Golson drops back to pass during the team’s Nov. 1 game against Navy. The senior has completed 61.7 percent of his passes for 8.25 yards per attempt this season.

To preview Northwestern’s trip to South Bend, Indiana, we traded questions about the two teams with Tim O’Malley, the publisher of Notre Dame site IrishEyes.com. Check out our answers to Tim’s questions about NU here.

The Daily Northwestern: When this series was announced in 2011, it looked like the 2014 game might be a winnable one for Northwestern. Since then, Notre Dame has a BCS Championship appearance and NU is in danger of missing a bowl game for the second straight year. What’s the general feeling around South Bend about what Brian Kelly has done with the program and the direction it is headed?

Tim O’Malley: The start of 2014 (through FSU) cemented it for most realists: Kelly is one of the best coaches in the country and more important, he’s the best Notre Dame can get given recruiting restrictions and everything else that accompanies the position.

Quibbles include his love of the pass, a head-shaking loss each season with the exception of 2012, and, well, how the 2012 BCS Championship game played out. And, for the faint of heart, his occasionally volatile sideline demeanor. But he’s more successful than the previous three coaches by a wide margin and if his eventual successor matches or surpasses Kelly’s final win total and accomplishments, it will be in part because of the foundation Kelly laid for him.

The ASU game surprised most ND fans, but a 3-0 finish in November would all but erase its memory; it’s not like they lost to Navy and/or Tulsa as was the case at the outset of the Kelly era.

The Daily: The Fighting Irish are coming off a tough loss that almost surely knocked them out of playoff contention. Will we see any hangover effects from that game on Saturday?

TO: I think so, in fact, my co-worker Anna Hickey marked it (months ago) as the trap game of the season. The only caveat for me is the way the team finished the ASU game, fighting and believing it would win. But I can’t imagine this week of practice will be on par with that of a championship contender, and Northwestern’s slotting is a bit of a sandwich on this schedule after big games (FSU, Navy — usually an issue these days — and ASU over the last three) and prior to Senior Day vs. surging Louisville and then, rival USC.

As well, the Irish are young, with just five key players among their top 25-26 competitors set to exhaust eligibility at season’s end. November can be rough on a collection of freshmen and sophomores, but they pride themselves on the motto, “You don’t rise to the occasion, you sink to your level of preparation.”

Being out of the running for the playoffs after being a mere play away from a No. 1 or No. 2 ranking as they left Tallahassee will test that approach.

The Daily: Defensively, Northwestern plays a soft cover-4 scheme that has mostly prevented big plays but leaves vulnerabilities underneath. How adept has Everett Golson been at methodically picking apart a zone defense?

TO: I think if the Irish can run the ball, Golson will find success in the intermediate game. His best work underneath has come in the screen game as the Irish used bubble screens to beat Syracuse (he completed 25 consecutive passes) and the tunnel screen to wide receiver Will Fuller has been a weapon throughout the season. Golson has the arm to complete hitch after hitch and out after out — patience will be the tested virtue.

He does, however, pride himself on getting through his reads. Golson’s not much of a talker, but when it’s pointed out he hit his fourth or fifth progression on a play, he lights up. It’s still Advantage Northwestern, in this regard, because Golson and the Irish offense is most dangerous when he’s making plays far downfield.

Additionally, with Golson’s penchant for the turnover, the more Northwestern’s defense can make him work, the better chances they have of finding advantageous field position or killing a long ND drive in the red zone.

The Daily: On the flip side, the Wildcats are dead last in the FBS in plays of 30 or more yards. Is there any hope of that changing on Saturday?

TO: The Irish defense hasn’t allowed many big plays this season but they have faltered overall of late. Arizona State’s 55 didn’t come from an offensive show (two defensive touchdowns, two drives of 13 and 6 yards, respectively) but Navy hit the Irish in chunks as did Florida State and North Carolina. It’s worth noting that FSU hits everyone for chunks and Carolina’s offense was pretty impressive in person on Oct. 11 in South Bend.

What’s worked best against Notre Dame is the use of an up-tempo attack as it limits the much-needed situational substitution favored by first-year defensive coordinator Brian VanGorder on a youth-filled defense.

Both Arizona State and North Carolina worked over the Irish defense when they played at a fast tempo.

The Daily: Northwestern’s special teams have been mostly a disaster in Big Ten play (fumbled punts, long kickoff returns allowed, missed extra points). Do you expect Notre Dame be able to exploit that to give their offense short fields?

TO: The third phase of the game hasn’t done much during the Kelly regime, though kickoff specialist (and punter, and placekicker) Kyle Brindza is outstanding. But punt returns have been a laughingstock for the better part of five seasons and the kick return unit has been subpar save for a standout effort by then-freshman speedster George Atkinson in 2011.

You won’t see a less impressive punt return team this fall and kick return has enjoyed but a spark or two over the nine games. Of note in that regard though: senior Amir Carlisle appears healthy after missing or hobbling through Games 4-8 with a sprained knee. He made an impact as a runner after the catch Saturday in Tempe.

The Daily: What should Northwestern fans making their first trip to South Bend make sure to do before or after the game?

TO: We have a post on our free message board with all the info you could want!