Field Hockey: No. 7 NU faces No. 9 Duke in first round of NCAA 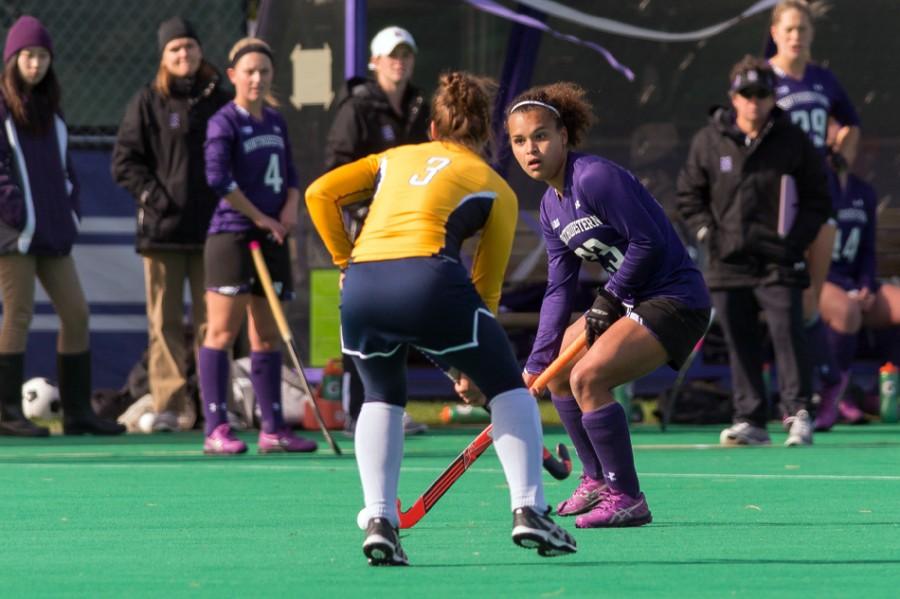 Isabel Flens maneuvers her way past a defender. The sophomore midfielder is the second-leading scorer on the team with 12 goals.

It’s been 20 years since Northwestern has seen its name in the NCAA tournament bracket, and at the Big Ten championship game on Sunday, the Wildcats decided that it had been 20 years too long.

On Saturday, the Cats will face No. 9 Duke in Chapel Hill in the first round of 16.

“Duke’s a great team,” coach Tracey Fuchs said. “They’re very much like us. They have a lot of depth—maybe not a superstar, but a lot of good players.”

This depth, the balance of skill and talent, has been the key to NU’s success this season. Three Cats have scored more than 10 goals this season and four players have tallied at least eight assists. An offensive star, Fuchs asserts, can be double-teamed or shut down. A balanced team, however, is much more threatening.

Sophomore midfielder Dominique Masters predicts that this might pose a challenge to the Blue Devil defense.

“It’s very hard when you have more than one person to look for and defend against,” Masters said. “They’ll be on their back foot a little because we have so much variety.”

However, the attack isn’t the only balanced part of the team. The depth of the Cats’ defense, anchored by senior goalkeeper Maddy Carpenter, has been effective in stopping aggressive offenses.

“Our defense has been really solid this past month. We haven’t given up a lot of corners, and when we have, we’ve defended them well,” Fuchs said. “We just need to stop (Duke) outside the circle, hopefully outside the twenty five, and limit their opportunities.”

The tenacity of both the offense and defense is reflected in NU’s statistics: The Cats have earned 161 penalty corners this season while limiting their opponents to just 113. Fuchs explained the consistency of the defense will allow the midfielders and the front line to attack more aggressively on Saturday.

“It gives us the ability to really risk it … and take more chances, knowing that if we turn over the ball we can defend it,” Fuchs said. “We have Maddy (Carpenter) and Lisa (McCarthy) and Charlotte (Martin), and our side-backs and midfielders have really stepped up. Hopefully we can really attack and not worry about them sneaking on in behind us.”

In keeping with consistency, the team has not focused on developing any new habits this week. Rather, they have continued to work on keeping possession out of the backfield and maintaining poise while attacking on offense. The Cats will, however, have to work to push the Blue Devils toward the sidelines and away from their strength in the middle of the field. NU also aims to come out aggressively from the start of the game.

“Sometimes we are on our back foot in the beginning of games,” Masters said. “We need to make sure we are putting something on.”

The Cats need to maintain their balance off the field as well as on, Carpenter said.

“We just have to do the right things. We have to prepare, to recuperate, recover, stretch, do everything we can,” she said. “We need to juggle end of the quarter, finals-coming-up type school work with some of the hardest hockey we’ve ever played.”

Maintaining the balance could reap huge rewards for the team Saturday. It will be a particularly significant game for the seniors.

“Oh man,” Carpenter said. “For the seniors, it’s everything. It’s a joy to be here and be part of this team. We all love the sport, and we love each other. Just kind of playing hockey, really.”

If the Cats can stay balanced and just play hockey, they might walk away with another win.