Northwestern crashes out of Big Ten Tournament in PKs against Indiana 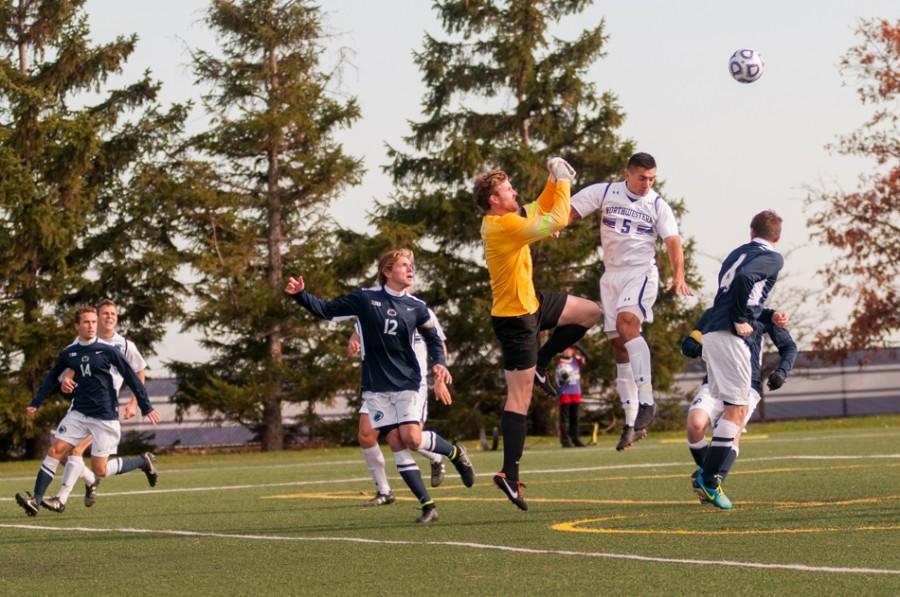 Senior defender Nikko Boxall’s second goal of the season wasn’t enough to spare Northwestern from defeat Sunday. The Wildcats lost in penalties to Indiana in the Big Ten quarterfinals.

For the second time this season, No. 16 Northwestern (9-3-6, 4-1-3 Big Ten) and No. 2 Indiana (11-3-5, 3-3-2) scored a goal each and could not be separated after two overtime periods. But instead of the match ending in a draw, this time the Wildcats crashed out in the quarterfinals of the Big Ten Tournament after losing the penalty shootout to the Hoosiers 4-5 at Lakeside Field.

Even though Cats senior goalkeeper Tyler Miller was able to make a save in the shootout and score a penalty kick of his own, senior midfielder Eric Weberman missed his spot-kick high, and sophomore midfielder Drew Rosenberg had to score to tie and continue the shootout but hit the crossbar from 12 yards out to give Indiana the victory.

“We missed two that we didn’t miss in practice,” coach Tim Lenahan said of the shootout. “You can’t replicate the wind (at practice) … But I was really proud of the guys and the way they played against a top team. They gave it everything they had.”

Before that, Hoosiers’ midfielder Dylan Lax opened the scoring with a good, driven shot from the outside of the box. Senior defender Nikko Boxall equalized for the Cats in the 38th minute when he turned in a header off of a good free kick.

The wind was a huge factor throughout the match, with junior forward Joey Calistri taking a shot immediately from the kickoff aided by the wind that forced a save from the Indiana goalkeeper.

The game started off at an electric pace. Indiana began the match with a lot of pressure, as midfielder Matt Foldesy had a shot saved by Miller in the third minute after good work on the wing by midfielder Tanner Thompson.

Junior midfielder Cole Missimo responded when he cut in from the left and fired a shot just high after a good passage of play by the Cats offense, which was playing a lot of quick give-and-gos in an attempt to beat the Hoosiers defense.

However, it was Indiana that scored the first goal of the game in the 17th minute from a similar play as their first shot after a bad touch from senior midfielder Connor Holloway in the midfield. Indiana broke quickly, and Foldsey made a layoff that found Lax who drove a low, well-placed shot to the back of the net that beat Miller at full stretch. It was an opportune time for Lax to score his first goal of the season.

The game settled down a bit after the goal, with NU doing a good job of absorbing pressure and countering quickly.

With seven minutes to go in the half, sophomore midfielder Brandon Medina, who had just been substituted in, was fouled close to the sideline. He got up to take the free kick that found the head of Boxall, who made no mistake from short distance to equalize for the Cats and pick up his second goal of the season.

The second half maintained some of the slightly slower pace from the end of the first period. In the 57th minute, Missimo made another good run from the left wing, cut into the box and had a shot hit the side netting, fooling some of the spectators at Lakeside Field.

Indiana put some pressure on the Cats goal towards the end of regulation, with Thompson firing a shot off the inside of the left post with four minutes to go in the match, but it didn’t go in, and the teams remained inseparable at the 90th minute mark.

Shortly into overtime, Calistri went on a run, beat his marker down the right side of the field and tried cutting it back for what would have been a sure goal, but the ball was saved well by goalkeeper Colin Webb. Immediately afterward, Indiana broke and Richard Ballard forced a brilliant stop from Miller.

The Hoosiers pushed hard for a goal in the second period of overtime, with Calistri doing his defensive duties and coming back for a block inside the box, but nothing materialized for either team as the match went into penalty kicks.

“We had to get the goal back in the first half with the wind,” Lenahan said. “I was really proud of the guys and how they responded and pushed. … By the time we got the wind in the second overtime we didn’t have much left in our tank.”

Indiana took and made the first penalty kick to the right of Miller, but Calistri responded with a shot of his own down the same side of the goal. Thompson scored his shot from 12 yards out next, and then Weberman missed high to put the Hoosiers at an advantage. Both teams scored in the next round of shots.

After another successful Indiana penalty, Miller stepped up to take a kick of his own and smashed it into the roof of the net. Immediately afterward, he made a save and Holloway scored to make the teams tied 4-4 after five kicks each. Webb then scored from the spot, and with the game on the line, Rosenberg hit the crossbar, ending NU’s hopes of a deep run into the Big Ten Tournament.

“Honestly I was just trying to read them the best I can and hopefully I’d get it right,” Miller said. “I knew if I saved one then we would have a chance.”

Despite the result, Lenahan is confident of his side’s chances of making the NCAA Tournament.

“We probably have 10 days now to prepare for our next game,” he said. “We always want to win a Big Ten championship so there’s disappointment with that, but that being said, we get the chance to get some guys healthy and train and grow … so we can be sharp and ready for whatever comes.”