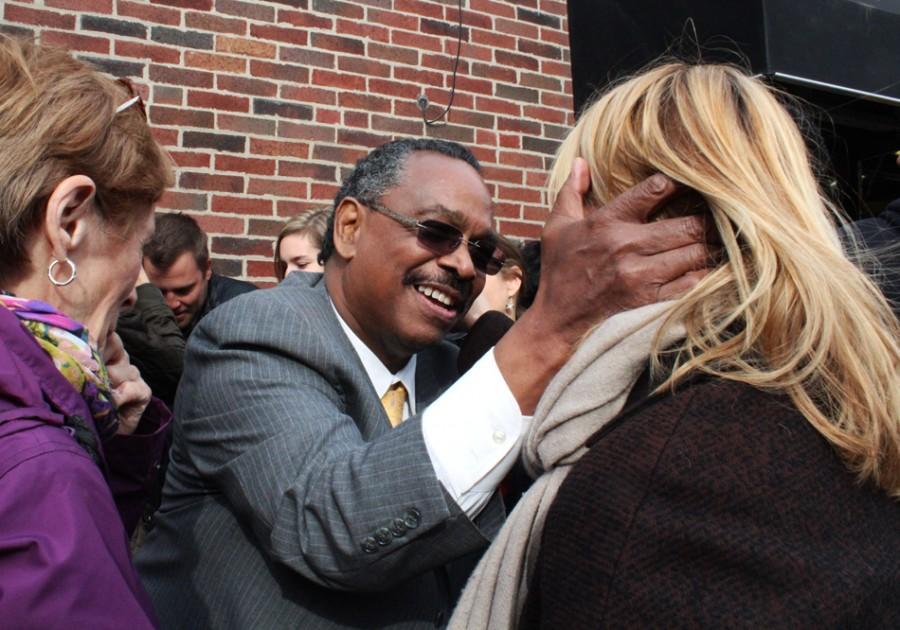 Hecky Powell, owner of Hecky’s Barbecue, greets friends and family members. Powell was honored Sunday for his commitment to the employment of teens and youth in the community with an honorary street sign on the corner of Green Bay Road and Emerson Street.

After 30 years of community service, the owner of Hecky’s Barbecue was celebrated Sunday with an honorary street designation on the corner of Green Bay Road and Emerson Street.

About 100 community members and leaders came to the restaurant, 1902 Green Bay Road, on Sunday afternoon to watch the unveiling of the “Hecky Powell Way,” named after owner Hecky Powell.

Among the people present at the event was Powell’s mother, Verna. She worked at Hecky’s at the beginning, and said she is happy to see how far her son has come.

“I was his first cook here, for 10 years,” Verna Powell said. “When I came to work for Hecky, he had one man, that was all. I am proud of him because he has done so well. He is loved a lot in the community, like we all love him too.”

Hecky Powell opened Hecky’s Barbecue 30 years ago after becoming discouraged with his work as social services administrator, according to a news release about the event. Since then, Powell has served as president of the Evanston/Skokie School District 65 school board, started a charity foundation named after his father and became known as an advocate for Evanston youth.

Jonathan Baum, member of the District 202 board, attended Sunday’s ribbon cutting because he wanted to recognize all of the work Powell has done for youth in Evanston and the community.

“There is no one who has shown more dedication to the kids of this community than Hecky,” Baum said. “Sponsoring teams, hiring kids to work for him, he’s just demonstrated a real commitment to the youth of the community.”

Baum, who worked with Powell when he was District 65 school board president, described him as an honest and outspoken leader.

“Hecky is an original,” he said. “He does not shrink from sharing his opinions, he is fearless. He doesn’t really care if anyone is bothered by what he says, as long as he is speaking his truth.”

Ald. Jane Grover (7th) said she attended the event to celebrate the numerous ways Powell has served the community over the years.

“Hecky is embedded in the community, his reach goes broad and deep,” Grover said. “He’s worked so tirelessly on so many youth issues. He’s got the Forrest Powell Foundation that does a lot of good work locally. He stood up and took his turn, served elected office. He has just made his good intentions and good work felt in so many ways.”

Ald. Delores Holmes (5th), whose ward encompasses Hecky’s, originally recommended Powell for the honor of a street designation due to his work and community activism.

“This is a great day for the 5th ward,” said Holmes. “He’s done so much for our community in terms of sponsoring sports teams, hiring kids that no else will hire. He’s a wonderful person, a wonderful community person. I am just proud and think it’s an honor well deserved.”

Despite all the success that Hecky’s has seen over the last 30 years, Powell said there is another, bigger accomplishment of which he is most proud.