Men’s Basketball: Collins to experiment with lineups in exhibition with McKendree 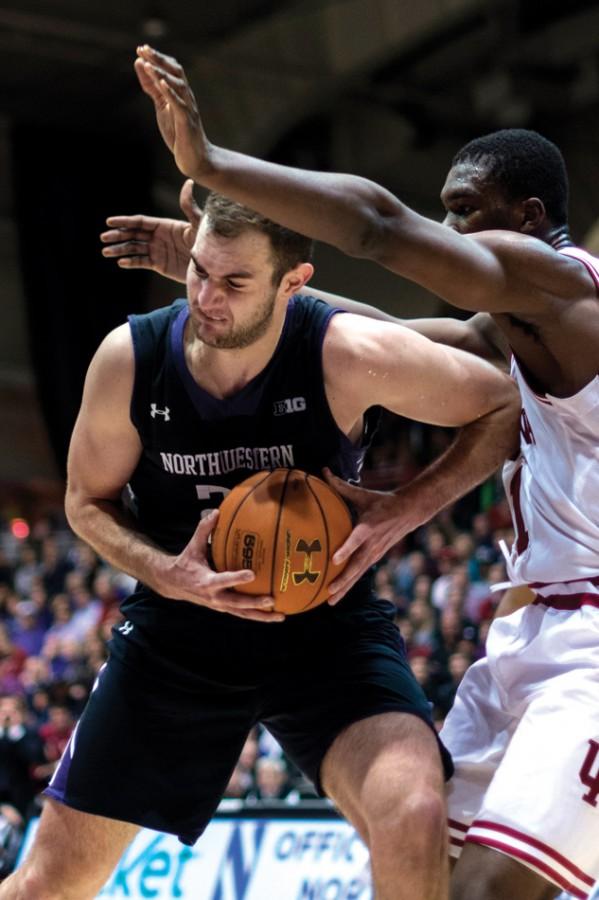 Alex Olah muscles his way around a defender. The junior center is expected to play a larger role in his second year in coach Chris Collins’ system.

Who cares that McKendree lost to Evansville by 28 points in an exhibition last Saturday? No matter how the competition looks, coach Chris Collins’ top goal is to bring it in Northwestern’s season-opening exhibition Friday and give his young team some winning experience.

“Ultimately, we need to learn how to win,” Collins said. “First and foremost is we want to win the game.”

But Collins is not yet sure what lineups and rotations give his team the best chance to achieve that goal, not necessarily just for Friday’s game, but for the season.

Collins is expected to start veterans JerShon Cobb, Alex Olah and Sanjay Lumpkin, along with freshmen Bryant McIntosh and Vic Law, according to NU’s game notes. But he said he plans on experimenting during the exhibition with new lineups and rotations to see what does and does not work.

“I have a little bit of an idea of what I’d like to do and how I’d like to play,” Collins said. “It changes when you get into games because you might see some things that you don’t see in practice. When you put everybody together, who plays well together? … We’ll use (Friday) to start developing a rotation.”

Olah, a junior center, spent all offseason working on his post moves, rebounding and generally rounding out his game. Even though the Bearcats are the weakest opponent the Wildcats will face all season, Olah said he wants to see how his development, and the team’s preseason work overall, holds up against new competition.

“We all know the plays, so we can kind of cheat in practice,” Olah said.

Facing an unfamiliar opponent will provide a better idea of where the Cats stand entering the season.

The Cats’ season will depend heavily on the performance of its freshman class, tabbed 31st in the nation by ESPN’s recruiting rankings.

In addition to the two probable starters who are newcomers, Collins has said freshmen Scottie Lindsey, Johnnie Vassar and Gavin Skelly could also see quality minutes this season. The key will be getting them as game-ready as possible before the Cats play their first game that counts on Nov. 14.

“In a game like this you want everybody to get an opportunity to play and get some experience and get their feet wet in college basketball,” Collins said.

While the freshmen make the transition to the college game, center Jeremiah Kreisberg is also transitioning, just a bit differently. Kreisberg played three seasons at Yale and then transferred to Northwestern as a graduate student for his final season of eligibility.

Friday will be Kreisberg’s first competitive game since March 9, 2013. He missed all of last season with an injury.

The game will not mean anything in the win and loss columns, but the rest of the Cats are excited to get back on the court as well.