It’s been a terrible year on offense for Northwestern.

The unit looked good on paper heading into the season, but, through eight games, it has produced a tepid 19.1 points per game, a mark that ranks 117th out of 128 Football Bowl Subdivision teams.

That production seems even worse given the emergence of true freshman running back Justin Jackson, who has been the savior of the offense this year by amassing 726 yards and five touchdowns rushing.

The impotence of the passing attack — the Wildcats rank 122nd nationally with 5.6 yards per attempt — is mostly responsible for the paltry point totals, and at this point it’s hard to know what exactly has gone awry.

Senior quarterback Trevor Siemian gets most of the blame, and while his play this season has been mediocre — statistically he is the worst quarterback in the Big Ten (more on that later) — he isn’t alone out on the field. The offensive line and receivers, as groups, have just as much to do with the success of the offense as the quarterback.

Siemian hasn’t had much time to throw the ball this season.

NU’s quarterback has taken 23 sacks this season, but not all of them can be blamed on the offensive line. Siemian has notoriously poor pocket presence, isn’t very elusive in the backfield and frequently has to hold onto the ball because his receivers aren’t open.

Additionally, the Cats’ offense is hard to gauge because so many of the pass plays they run are designed short throws or screens. This doesn’t offer much opportunity to grade the linemen on their pass blocking, and the short passes may be so prevalent in order to mask the weaknesses of the line.

From any perspective, offensive linemen are difficult to quantitatively judge.

It’s difficult for an observer to know what a blocker’s job is on a given play, but looking at the line’s performance in the run game may offer some insight on their overall performance. Run blocking and pass blocking are distinct but still related abilities, so there is some correlation between the two.

Not surprisingly, the rate statistics for NU’s running game are poor, with the Cats generating just 3.23 yards per carry, 115th in the nation, even with Jackson in the backfield.

It’s impossible to calculate the exact contribution of the offensive line to the Cats’ passing woes, but it’s also reasonable to say the offense would be better if the line were playing at a higher level.

“Horrible,” coach Pat Fitzgerald said of the recent play of his pass-catching group, “but we’re not going to stop coaching them. A lot of guys in that group, that’s what I’m talking about: Every day is the first day.”

The most visible aspect of the Cats’ offensive frustration has been drops by receivers, which reflects a lack of the football fundamentals Fitzgerald loves to harp on.

Nearly every pass-catcher on the roster has been culpable at one point or another, so it’s easy to say if all the drops were eliminated Siemian’s numbers would be better and the offense would be fixed.

But every offense has to account for dropped passes, and NU likely isn’t significantly worse than other teams.

Rather, the Cats’ drops seem worse because of their situational context. The offense doesn’t employ many deep passes and frequently finds itself in key third down situations, magnifying the effect of every ball that isn’t caught.

NU has more of a problem with its receivers getting open, either because of scheme or ability. Covered receivers make it more difficult for the quarterback to get rid of the ball and also make the ball more difficult to catch.

“The concept calls for a guy to run a route with an outside release and he inside releases,” Fitzgerald said. “I don’t know how to tell Trevor what to do on that.”

The receivers’ failure to create space frequently shows up in game tape. Take, for example, the play seen in the first image from early in NU’s loss to Iowa. 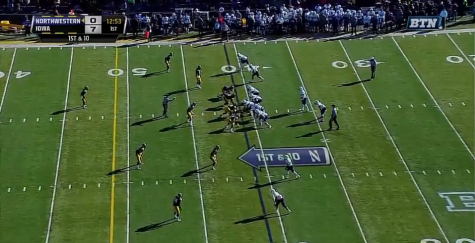 The Cats line up with four wide, and the Hawkeyes match them by spreading out their linebackers. Each NU receiver has a defender lined up across from him, indicating man coverage. 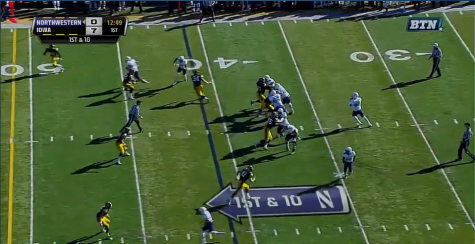 As can be seen in the second image, Siemian reaches the end of his drop-back and doesn’t have any options, with all of the receivers in the frame covered or near-covered. 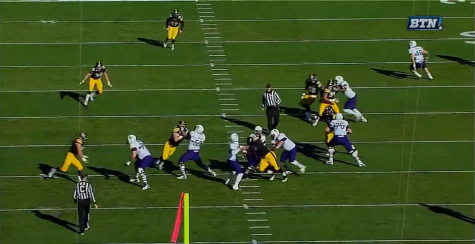 In the third image, Siemian looks poised to hit a seemingly open Dan Vitale, but it’s actually a good thing the quarterback didn’t throw towards the junior superback. Iowa’s free safety is shading towards Vitale because the receivers to his right are covered, and if Siemian attempted the throw he could have easily jumped the route and broken up the pass.

Siemian only has about 2.5 seconds to throw on this play, but ultimately takes the sack because his check-down receiver (to the right of the referee) runs right into double coverage.

One play isn’t indicative of what’s been going on for an entire season, but this particular example does illustrate some of the challenges the offense faces in relation to its receivers.

As previously mentioned, based on his statistical output Siemian is the worst starting quarterback in the Big Ten.

Among qualifying players (those who have started at least 75 percent of their team’s games and have at least 15 pass attempts per game), Siemian is 12th out of 12 starters in the conference in yards per attempt with 5.5.

Despite the poor yards per attempt figure Siemian is still eighth in completion percentage, highlighting NU’s affinity for short passes (the four quarterbacks below him still have a higher YPA despite having more attempts that go for zero yards).

His touchdown ratio is the worst in the conference, with just four touchdown passes in 283 passing attempts.

Mercifully, he has managed to limit his turnovers and has thrown only six interceptions this year, but that’s probably more a result of NU’s conservative play-calling than anything else.

One thing is clear at this point in the season and in Siemian’s career: The quarterback has regressed. He is not the same player who showed promise in 2012 and (albeit brief) flashes of brilliance in 2013.

Siemian shouldn’t receive all the blame but rightly deserves much of it. Competent performances from him were enough to earn improbable wins over Penn State and Wisconsin, but the margin for error for the defense is incredibly slim when Siemian is leading the offense.

This isn’t to say that junior backup Zack Oliver is a better option, because his 1-for-6 performance in relief duty against Iowa was far from inspiring. There is more talent down the quarterback depth chart in redshirt freshman Matt Alviti and true freshman Clayton Thorson, and it’s striking that neither has received any consideration.

But if the play of the offensive line and wide receivers is any indication, simply making a switch at quarterback will not be enough. The entire passing game is struggling and has been worse than expected.

It’s not a lost season yet, but the Cats simply may not have the pieces on their current roster to turn things around.