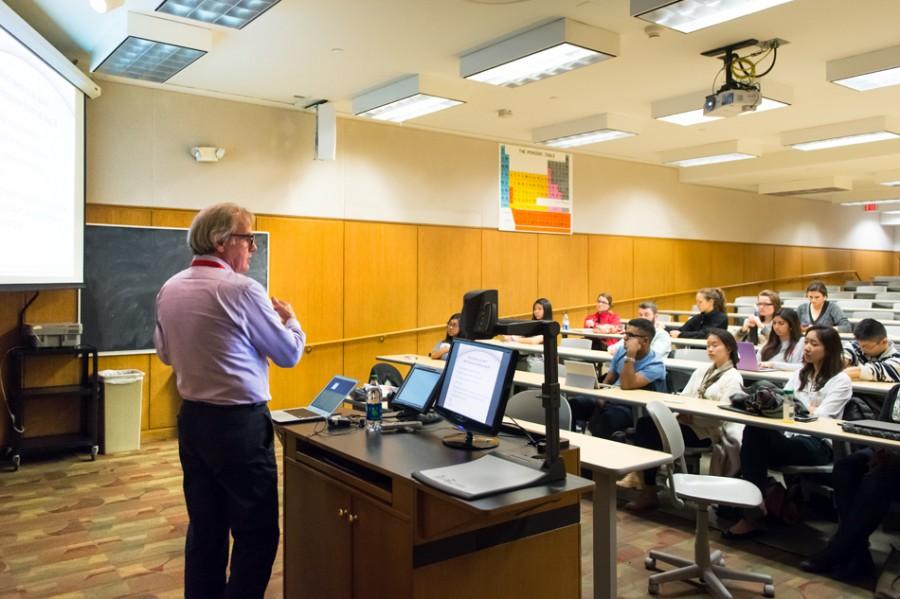 Dr. Robert Murphy, special adviser to the president’s Emergency Plan for AIDS Relief in Nigeria, speaks Tuesday about the Ebola epidemic to an audience of about 25. Murphy discussed common misunderstandings surrounding the virus.

A special adviser to the president who assists in Nigerian AIDS relief spoke Tuesday about the Ebola epidemic and common misconceptions about the disease.

Dr. Robert Murphy, special adviser to the President’s Emergency Plan for AIDS Relief program in Nigeria, addressed about 25 students during the talk.

The event was hosted by the Northwestern chapters of the American Red Cross, MEDLIFE and Rotaract Club.

“Even though we are in college getting an education, we are still in a bubble,” Kim said. “We need more awareness of current events like this, especially during a time when the media and Internet cause so many misconceptions.”

Murphy, director of the Center for Global Health at NU, began the talk focusing on the microbiological and historical background of the Ebola virus, describing the structure of the virus and where the current epidemic originated.

As of March 24, 2014, the outbreak in Guinea killed 59 people and spread to neighboring countries in West Africa. Murphy said the disease is spread among humans via bodily fluids and initially produces symptoms similar to malaria, such as headache and fever. People who contract the disease later experience gastrointestinal distress, resulting in symptoms including vomiting and bleeding.

In previous outbreaks, the mortality rate was 90 percent, but Murphy said the survival rate is now much higher. In contrast to most outbreaks, the current epidemic has affected mostly urban areas, which usually have more access to supplies and medical personnel.

“Hospitals in rural Africa may have no electricity, may have no running water and often have limited supplies,” Murphy said. “When someone comes in sick with Ebola, they don’t get any fluids or treatments. They just die in isolation.”

In the United States, patients have access to supportive care. The U.S. patients with Ebola have received extensive care, including blood transfusions from Ebola survivors and experimental therapies.

“There are no proven treatments or vaccines for humans, but this epidemic has sparked a whole new industry for drug development,” Murphy said.

He said currently there are several experimental drugs and the Department of Defense and National Institutes of Health in conjunction with pharmaceutical company GlaxoSmithKline are currently working on clinical testing for possible treatments.

Although all patients who contracted the disease in the U.S. have successfully recovered, Murphy emphasized the need for a better health emergency response strategy.

“The hysteria was extremely high compared to the risk,” Murphy said. “It couldn’t have been handled any worse.”

He further explained that a true epidemic in the U.S. would have resulted in disastrous consequences because of the lack of an effective response system due partially to the lack of federal authority regarding health matters.

Murphy also addressed the appointment of Ronald Klain as the Ebola response coordinator, saying public health authorities should be aiding the response, as opposed to politicians, who lack vital public health and epidemiological knowledge.

Murphy encouraged students to involve themselves in public health and discussed the necessity of immersive experience in countries with low quality of care.

Weinberg junior Yuanhan Xu said he attended the talk because of the importance of general awareness concerning public health issues.

“The media is filled with exaggerations about this disease, so I thought it would be interesting to hear a professional standpoint,” Xu said. “Being knowledgeable about health issues is important for everyone, whether or not you plan on working in the medical field.”