More than 5K turn out for early voting in Evanston 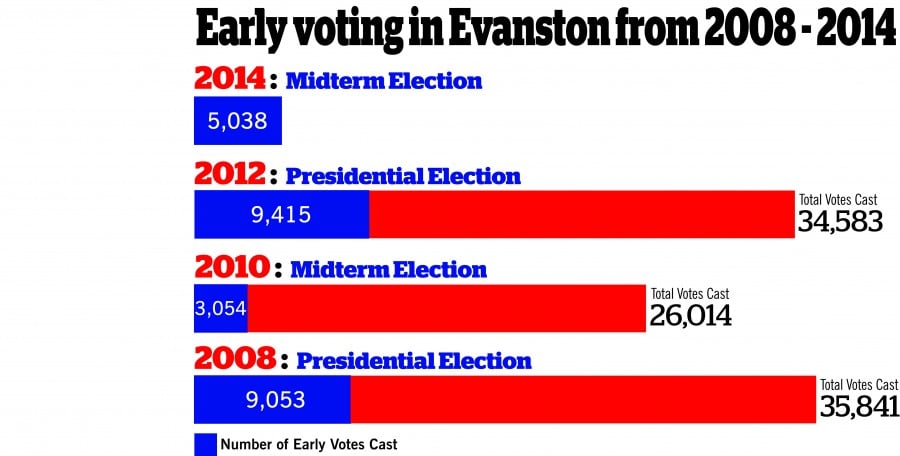 As Evanston residents and Northwestern students head to the polls Tuesday, more than 5,000 people have already submitted their votes in the general election.

Voters registered in Evanston were able to submit their votes in a variety of elections, including the Illinois gubernatorial race, through early voting at the Civic Center held from Oct. 20 to Nov. 2.

Comparing voting numbers between 2012 and 2014 is difficult, as there are always significantly more voters who turn out when a president is being elected, said Jim Scalzitti, the Cook County clerk’s office deputy communications director.

More Evanston voters turned out to cast their ballots early in 2014 than in the previous gubernatorial election four years ago when Illinois Gov. Pat Quinn was elected. Quinn first took office in 2009 after former Gov. Rod Blagojevich was removed from office.

Only about 3,500 people came out for early voting in 2010, according to the Cook County clerk’s office.

When general voting opens at 6 a.m. Tuesday, city voters will have more than 30 locations to choose from to vote. Illinois residents will be able to, for the first time, register to vote at certain locations on Tuesday when they show up to cast a ballot.

People will vote in a variety of elections, not only in prominent races, such as the state governor and U.S. and state General Assembly members, but also for candidates for positions in Cook County and the state, such as the secretary of state and the treasurer.

In addition to voting for candidates, people will vote on a number of referenda on the ballot. Statewide referenda will advise General Assembly members on how to vote on laws when they return from vacation later in 2014. Voters will voice their opinion on raising the minimum wage to $10 in 2015, requiring state health insurance plans to cover prescription birth control and implementing an additional income tax on people who make more than $1 million.

In addition to the advisory referenda, Illinois voters can decide whether or not to adopt two constitutional amendments that aim to strengthen the rights of crime victims and officially give all people the right to vote.