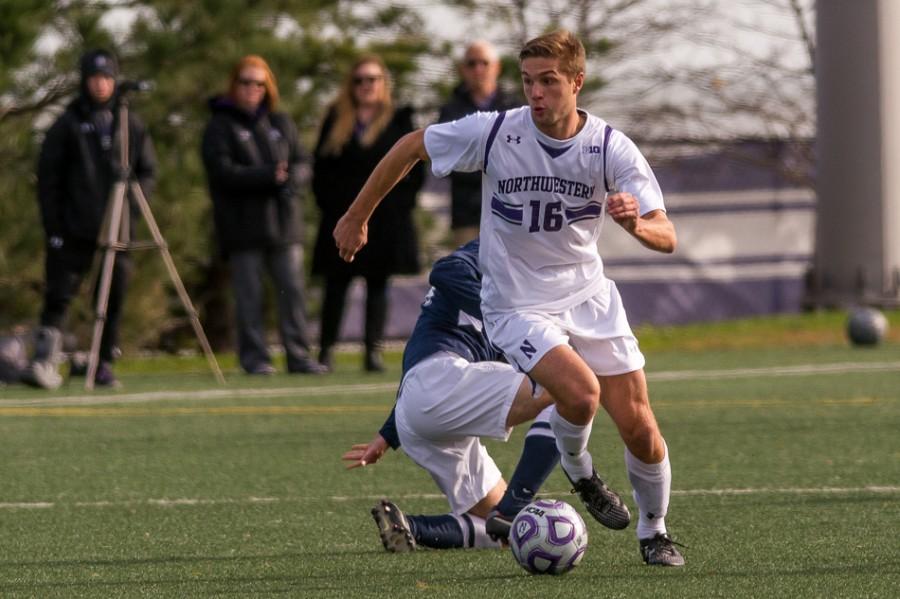 Forward Mike Roberge’s third goal of the season came at the perfect time for Northwestern. The sophomore scored in double-overtime to lift the No. 20 Wildcats over No. 18 Penn State.

The Wildcats picked up a big 2-1 double-overtime win Sunday at Lakeside Field in their second-to-last game of the season.

No. 20 Northwestern defeated No. 18 Penn State with less than two minutes to go in the match when sophomore forward Mike Roberge scored the golden goal, his third goal in as many conference games. Prior to that, senior midfielder Eric Weberman hit a great curler into the back of the net with the outside of his foot to cap off his senior day and forward Mikey Minutillo equalized for the Nittany Lions off a penalty kick despite a double save from senior goalkeeper Tyler Miller.

“We played very well,” coach Tim Lenahan said. “We tried some different things attacking-wise to create some more (chances). … They’re a great team, there’s a reason why they’re the two-time Big Ten champions. It was a great day, a great win.”

The match started slowly, with the two teams feeling each other out before committing too much to an attack, but it was NU that broke the deadlock first. A good play at the edge of the box by junior midfielder Cole Missimo, including an impressive backheel, left Weberman at the edge of the box to curl it in to the back of the Penn State net with the outside of his foot in the 14th minute of the match.

“Eric Weberman, who hasn’t been playing that much, comes in and hits a picture-perfect goal,” Lenahan said. “I’m happy for our seniors, happy for our team.”

This was only the Cats’ 4th first-half goal of the season, and it got the Cats off to a flying start. They didn’t take their foot off of the accelerator, with Missimo shooting a rocket from the right side of the 18-yard-box and forcing a great save from goalkeeper Andrew Wolverton, who punched it out for a corner.

Despite that, Penn State was still able to create some good opportunities. In the 31st minute, after a corner kick for the Nittany Lions, a shot went high by midfielder Drew Klingenberg, who was Penn State’s most dangerous player of the match.

However, it was Minutillo who equalized for the Nittany Lions with seven minutes to go in the half. A penalty kick was called on NU, and Miller made a fantastic save at full stretch to his right to save the kick, but it was sent right back to a blue shirt, who sent another shot toward the goal. Miller got up from the ground and made another sprawling save, but eventually Minutillo bumbled the ball over the line.

Tempers flared toward the end of the half, as junior defender Henry Herrill received a yellow card in the 35th minute for booting the ball away after conceding a foul. Then, with just a minute to go in the half, there was a little bit of pushing and shoving before an NU free kick.

After the second-half kickoff, senior goalkeeper Brendan Gruenwald-Schmitz started the match out-of-position in midfield and then was quickly substituted as a kind gesture from the coaching staff so he could earn his varsity letter.

The second period was played with much more caution, with both teams playing a physical defensive performance compared to the fast-paced, back-and-forth first half.

Missimo was the best offensive player for NU in the second period, making good runs and opening up the field for his teammates junior forward Joey Calistri and Roberge. Toward the end of regulation, Missimo cut in from the right side and made a good shot that rolled just wide of the goal.

On the other hand, Penn State’s most powerful offensive weapon, forward Connor Maloney, who has scored 9 goals this season, was kept very quiet by the Cats’ defense and looked visibly frustrated in the second half. Maloney was troubled by the physicality and height of the NU defensive unit.

Neither team was able to make a breakthrough as the match headed into overtime.

The first overtime period went much like the second half. Penn State had an opportunity with a shot going just wide in the 94th minute and looked overall more dangerous.

In the second overtime period, the opposite was the case, with the Cats getting some good chances. NU put the ball over the line and into the goal, but it was pulled back for an offensive foul. Just a couple of minutes later, Weberman, who was played in well by Missimo whizzed a shot wide of the Penn State goal post after a deflection.

NU was rewarded for its efforts with less than two minutes to go in the match. Roberge was played through by a flick-on from freshman forward Elo Ozumba and got past two defenders and expertly finished for the game-winning goal.

“It’s been really nice that Elo and I have been able to really provide a spark and bring energy to the game,” Roberge said. “Good things happen when you’re working hard up top.”