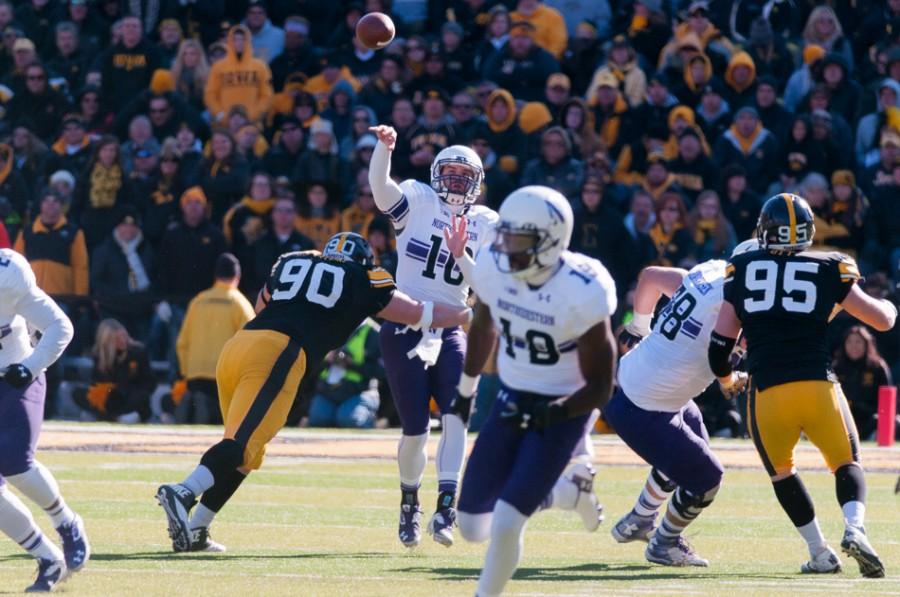 With 13:47 to play and Northwestern losing 41-7 to Iowa, junior Zack Oliver replaced Siemian under center. Siemian — who has faced criticism for his play all season — completed 8-of-18 passes for 68 yards and was sacked five times on the day before being removed.

“We weren’t moving the ball,” coach Pat Fitzgerald said when asked about his reason for the switch. “And let’s give Zack an opportunity to go out there and get some game reps.”

Siemian had played almost every snap this season before Saturday, coming off the field on offense only when he suffered an ankle injury against Northern Illinois.

But the senior has struggled all year, with a 57 percent completion rate, 5.65 yards per attempt, four touchdowns and six interceptions on the season.

Some of that poor performance may be due to the Sept. 6 ankle injury, though Siemian and Fitzgerald both indicated the ankle improved during NU’s bye week.

Siemian said he wasn’t too upset about being pulled Saturday.

“I didn’t really think about it too much,” he said. “I talked to coach (Mick) McCall, and he said Zack’s going to go in, so just try to help Zack out, get in his ear.”

He has been listed as the team’s backup throughout the season, ahead of redshirt freshman Matt Alviti, a former four-star recruit.

Fitzgerald did not make clear whether Siemian was pulled Saturday because of his performance or just because the game was out of reach.

The coach also would not say whether Oliver will play a role in the offense moving forward.

“We’ll see how things play out,” Fitzgerald said. “Obviously we lost the game, I haven’t watched the tape. We have to be better offensively.”