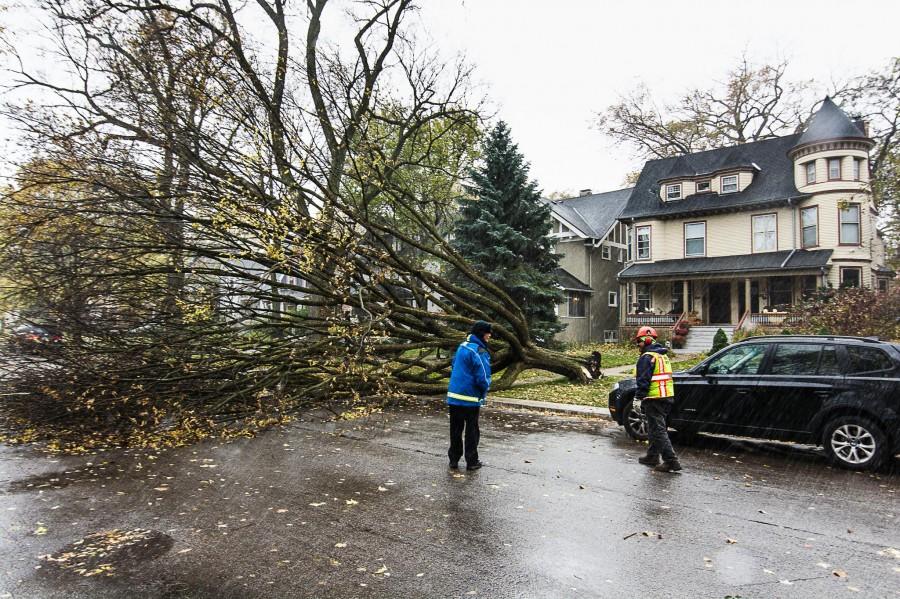 A tree lies uprooted near the intersection of Foster Street and Orrington Avenue on Friday. High winds of about 40 mph hit the city, causing multiple trees to fall and Northwestern University Police to close the Lakefill due to strong waves from Lake Michigan.

Evanston’s Forestry Division reported 10 fallen trees in the city as a result of last week’s storm, according to city manager Wally Bobkiewicz.

Severe weather hit Evanston and Northwestern on Friday, including winds of about 40 mph. Multiple National Weather Service warnings were in effect in the city. Wind gusts could reach 60 mph, and waves could reach 23 feet tall, according to the warnings. In Chicago, waves flooded Lake Shore Drive, leading to lane closures, according to ABC7.

The Evanston fire department responded to 51 calls related to down trees and power line issues, Bobkiewicz said in an email Saturday to Evanston media. Police also asked one person who was trying to go swimming to leave the lakefront, Bobkiewicz said.

The Lakefill and lakefront areas of NU’s campus were closed Friday afternoon when high winds caused waves to come over the rocks along the shore, University Police Deputy Chief Dan McAleer said. The areas were reopened Saturday morning after waves subsided.

An NU women’s soccer game against the University of Minnesota was postponed from Friday night to Saturday morning, according to NU’s athletic department.

As of about 8:30 p.m. on Friday, the traffic lights at the intersection of Sherman Avenue and Foster Street were back on after going out earlier that day.

On Twitter, Evanston Police Department said early Saturday morning that the severe weather conditions had subsided and all of the city’s roads were open. A light pole that had fallen on McCormick Boulevard between Prairie Avenue and Dodge Avenue had been moved off to the side of the street, police said.

No flooding was reported in Evanston as of early Friday evening, EPD Cmdr. Jay Parrott said. On Twitter, EPD warned residents to be careful of falling tree limbs during Halloween celebrations.