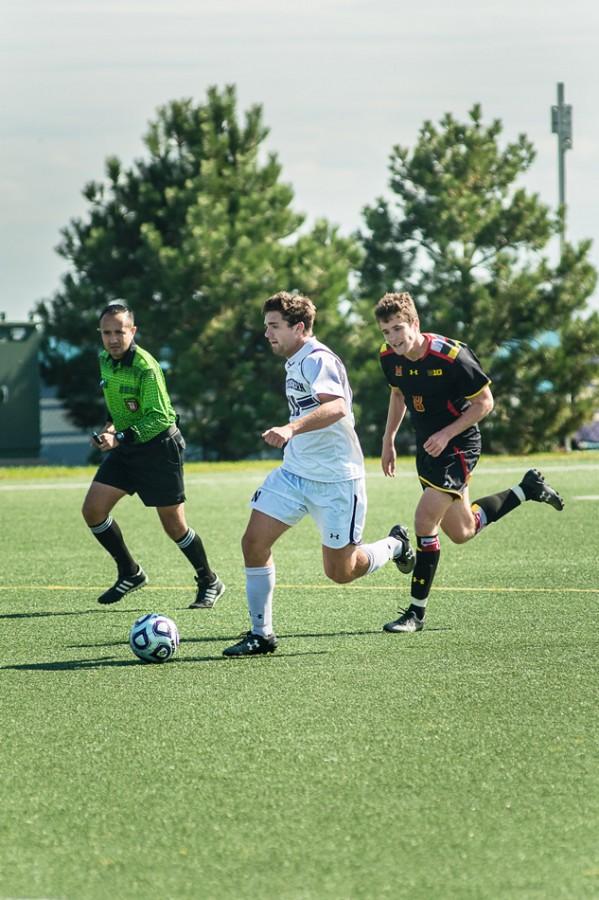 Jeffrey Hopson sprints up the field past a defender. The sophomore midfielder has been a solid contributor this season, starting every game and scoring 1 goal on 13 shots.

“Give credit to Loyola,” coach Tim Lenahan said. “They had a very good game plan and they executed it very well. … They did a great job, made the game very tight and close.”

Substitute forward Brian Bement scored the lone goal of the match in the 99th minute with a simple finish after a good through ball by forward Elliot Collier.

“We knew we would get chances to score in overtime,” Lenahan added. “Sometimes funny bounces happen, the ball popped in and the kid finished it. That happens in soccer. It’s not about being tired or not executing or performing.”

It was a rather uneventful first half, with both teams having trouble keeping the ball and creating good chances, with no shots on goal registered in the first period by either team. Even so, NU had the better opportunities.

Sophomore midfielder Brandon Medina had a chance in the 15th minute with a low, bouncing shot from outside the box.

Several minutes later, Loyola had an opportunity of its own when forward John Cappuccitti played a good ball to Collier on the break, but Cats senior goalkeeper Tyler Miller locked in the cross from the freshman, who is Loyola’s top scorer, holding onto the ball.

It was the Ramblers who received the only caution of the half, when midfielder Kirill Likhovid aggressively tripped freshman forward Sam Forsgen after he made a good move on the wing.

In one of the last actions of the first period, junior midfielder Cole Missimo, who had some silky touches on the ball throughout the match, made a skillful run down the sideline, but his cutback couldn’t find freshman forward Elo Ozumba.

The second half started in much of the same fashion as the first, but eventually the game picked up in pace significantly.

In the 57th minute, Miller was smart and quick off of his line to stifle a good through ball by the Ramblers offense. Just a minute later, Miller grabbed a dangerous, hanging cross by Likhovid. After that play, NU received a yellow card of its own when senior midfielder Connor Holloway was whistled for a foul near the midfield circle.

The Cats pushed hard for a goal in the last 15 minutes of the match, putting some heavy pressure on the Loyola goal to no avail. Late in regulation, the Ramblers’ defense almost scored an own goal off of an NU corner kick but the Loyola goalie was glad to grab the ball as the game went into overtime.

In overtime, Missimo had another good play down the sideline and found Ozumba in a similar position to his cutback in the first half. The Ramblers defense made a good block to prevent what would have been a sure goal.

“They ended up doing what they wanted to do in the game,” senior defender Nikko Boxall said. “We didn’t make the plays that we needed to. No excuses really.”

But soon after, Collier found his teammate Bement on the break with a good through ball and the substitute scored his second goal of the season with a good side foot finish.

“When you lose it’s sudden death, when you win it’s golden goal,” Lenahan said of the overtime finish. “Congratulations to (Loyola).”

NU returns to Lakeside Field after their five-game trip away from home for their final two matches of the season against conference leader Penn State and conference bottom-dweller Wisconsin.