Much attention has been given to the poor performance of Northwestern’s offense in the second half of the Wildcats’ game against Nebraska, but 24 second-half points from the Cornhuskers demonstrated the defense was also far from infallible.

Part of that lackluster performance was certainly due to fatigue and short fields, but the Nebraska offense also did a good job of exploiting structural weaknesses in the NU defense, namely the Cover 4 defensive scheme the Cats often use. 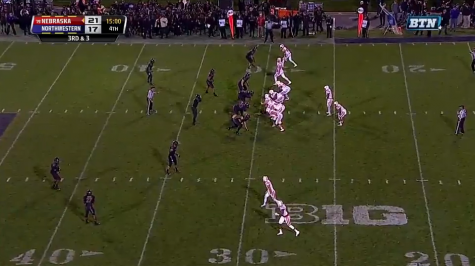 One such play was the Cornhuskers first play of the fourth quarter, the pre-snap alignment of which can be seen in the first image. Nebraska has four wide receivers, two to each side of the offensive line, with the receivers on the wide (bottom) side of the field bunched together.

What’s most apparent about the Cats’ defense is that, despite facing a four wide receiver set, they’re still using their base personnel package of four defensive linemen, three linebackers, two cornerbacks and two safeties.

Each defensive back is lined up over a Cornhusker receiver, but sophomore corner Matthew Harris and junior safety Traveon Henry (bottom and second from bottom, respectively) are standing well off the line of scrimmage. The Nebraska players to the wide side of the field have an open eight yards of field to work with. 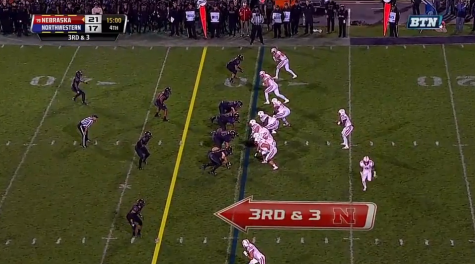 In the second image, Cornhuskers running back Ameer Abdullah motions to the left and NU senior linebacker Jimmy Hall shadows him, opening up space in the middle of the field.

It isn’t visible in any of the television shots, but as the ball is snapped the receiver to the far left of the formation runs a short post, sprinting a few yards upfield before angling inward, while the receiver to the near left runs a go-route straight towards the end zone. 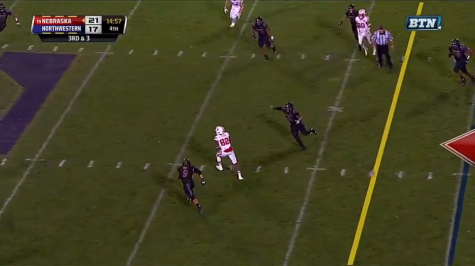 The result is plainly visible in the third image. All four defensive backs backpedal off the snap into what’s known as a Cover 4, in which each player covers a deep fourth of the field. With Hall following Abdullah in motion and redshirt freshman linebacker Anthony Walker lined up over center, Nebraska’s Alonzo Moore (82) has plenty of space to make an easy catch. 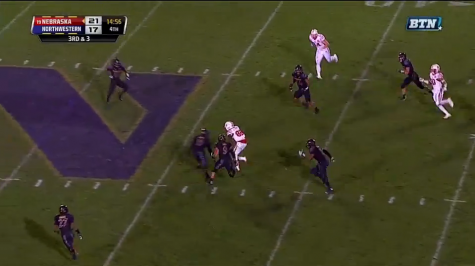 With no cornerback or safety in the vicinity, Moore easily splits Hall and Walker and turns upfield for a big chunk of yardage. As can be seen in the fourth image, Henry (third from left) doesn’t come over to make the tackle until Moore has reached the 45-yard line, 15 yards from the original line of scrimmage.

The Cover 4 scheme is frequently employed by NU, favored for its ability to contain big plays. But the tradeoff is leaving space open over the middle field. The Cornhuskers took full advantage of this by employing a pre-snap motion and utilizing a clever route combination to give their quarterback an easy read and throw and their receiver an easy catch.

This isn’t to say the Cover 4 is inherently flawed — all defensive schemes have strengths and weaknesses — but it is something to watch for, especially in critical defensive situations.