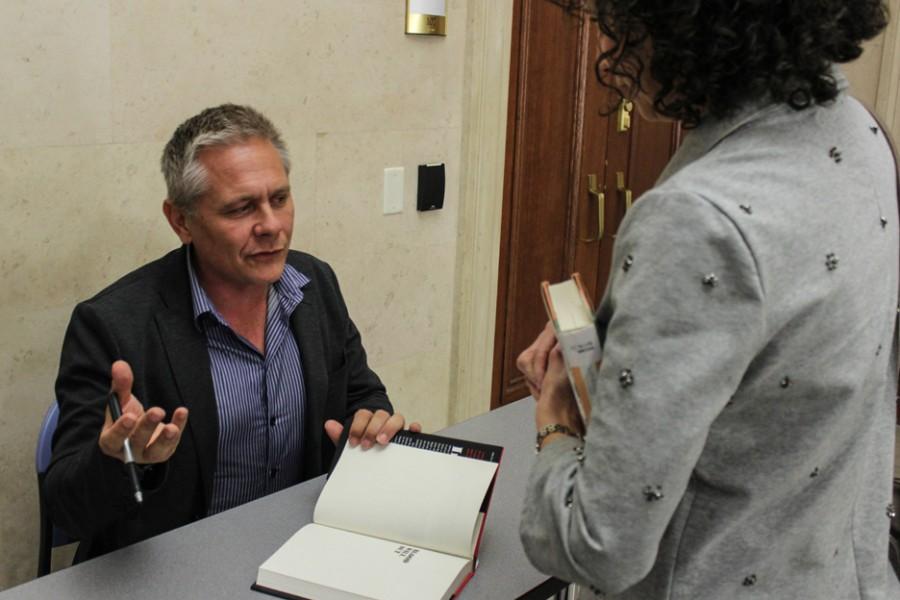 Author Walter Kirn signs a copy of his book after speaking Saturday as part of the Chicago Humanities Festival. His memoir, “Blood Will Out,” details his interactions with Christian Gerhartsreiter, who conned many under the name Clark Rockefeller.

Author Walter Kirn spoke at Northwestern on Saturday about his memoir chronicling his friendship with a man who turned out to be a con artist and a convicted murderer.

As part of the Chicago Humanities Festival, Kirn spoke to a packed Harris Hall about his book “Blood Will Out,” which tells the story of his connection with Christian Gerhartsreiter, who went by the name of Clark Rockefeller. Gerhartsreiter’s captivating demeanor fooled Kirn and many others for years, the author said.

Kirn is also known for writing the book “Up in the Air,” centered on a man whose job is to fire people. The novel was turned into a film with the same name in 2009, with George Clooney playing the main character.

“It’s always inspiring to partner with our Northwestern colleagues and, most specifically, the Alice Kaplan Institute for the Humanities,” Bahar said in an email to The Daily.

In 1998, Kirn and his then-wife Maggie Kirn lived in Montana. Kirn said Gerhartsreiter called his wife, who worked at the local Humane Society, and expressed interest in adopting a paraplegic dog that had been nursed back to health.

Kirn said he and his wife agreed to put the dog up for adoption and Gerhartsreiter asked Kirn to deliver the dog to him in New York, the author said. Gerhartsreiter said his wife was in China with the couple’s private plane which was their only mode of transportation, Kirn said.

Kirn called the trip to New York “the most foolish errand of my life,” but it was the start to his friendship with Gerhartsreiter.

During the next 10 years, Gerhartsreiter and Kirn interacted on multiple occasions. They remained friends until 2008, when Kirn read a news story that claimed Gerhartsreiter had kidnapped his own daughter. Authorities were able to rescue the then-7-year-old girl and capture Gerhartsreiter. After his capture, Gerhartsreiter’s past deceptions came to light.

The police also connected Gerhartsreiter with the disappearance of a couple in California in 1985. To evade the police, Gerhartsreiter had often changed his character, with different hairstyles, names and occupations.

“What we think we know about each other, and what we do know, can be miles apart,” Kirn said.

Gerhartsreiter was convicted in summer 2013 for the 1985 murder of California resident John Sohus. Kirn said he went to the trial, where several attendees told him they too had fallen for Gerhartsreiter’s various identities. Gerhartsreiter’s wife had no idea about her husband’s murderous and psychopathic past, Kirn said.

Gerhartsreiter’s wife Sandra Boss spoke at the trial, where she said she had not suspected anything about her husband and fell for his romantic personality, Kirn said.

Gerhartsreiter is currently serving 27 years to life in a California prison for first degree murder.