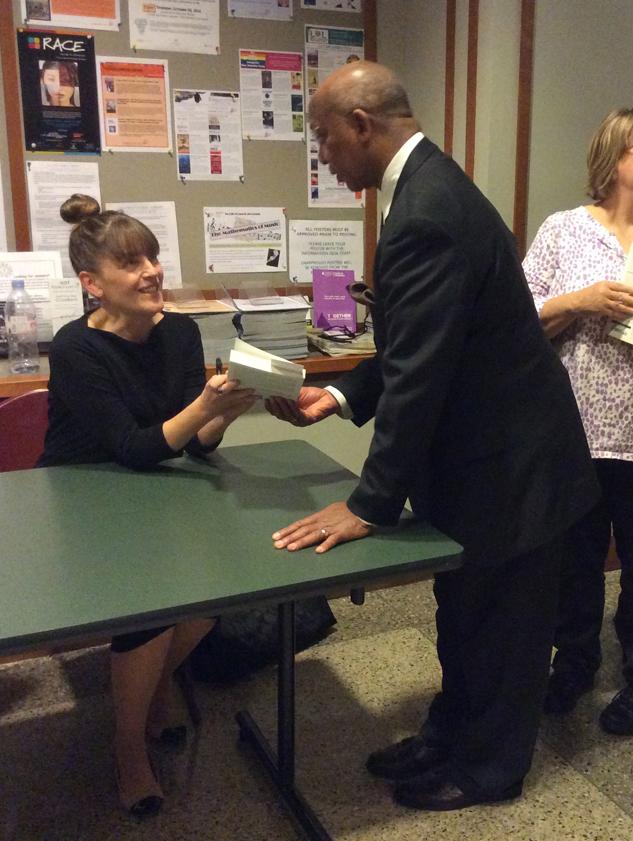 Mary Barr signs her book for an attendee of her talk Saturday at the Evanston Public Library, 1703 Orrington Ave. In front of about 100 people, Barr read an excerpt from her book, “Friends Disappear: The Battle for Racial Equality in Evanston,” which details the history of the city’s racial issues.

An Evanston native read an excerpt of her book which explores the history of racial inequality in Evanston to a packed audience Saturday.

Mary Barr, a lecturer at Clemson University, grew up in Evanston in the 1970s. Barr read some of her book, “Friends Disappear: The Battle for Racial Equality in Evanston,” to an audience of about 100 at the Evanston Public Library.

The event was held as a part of EPL’s “11 Months of African American History,” which started in March and will run through January.

Barr, who holds a doctoral degree in African American Studies and Sociology from Yale University, said an old high school photograph was the primary inspiration for her work and is used as the cover of her book.

“(The book is) a comprehensive history of Evanston through the ’70s, but it focuses on the ’60s, when schools were desegregating,” Barr said. “Essentially it’s the story of the civil rights movement in Evanston.”

The picture, which shows her with around a dozen of her friends, is important to Barr because of the racial diversity of the group, she said. It currently hangs on Barr’s refrigerator door.

“I was curious about everyone in the picture, where they were, what they were doing,” Barr said. “It had been more than 30 years since I had seen people in the picture. I decided to contact everyone and go to their homes and interview them.”

Barr read to the audience a chapter of her book that follows the mission of Gregory Coffin, who was hired as the superintendent in 1966 to oversee and implement school desegregation in Evanston/Skokie School District 65.

“He believed that true integration was about more than just mixing bodies,” Barr said.

In the book, Barr describes Coffin’s direct and abrasive demeanor that contributed to infighting between the superintendent and community members. During his career, Coffin would battle many critics who wanted him removed from his job.

In 1969, the school board declined to renew Coffin’s post as superintendent. In a matter of days, organizations sprung up in support of Coffin, Barr said. Despite the failure to reinstate Coffin as superintendent in 1970, Barr said in the book that the uniting of the community paved the way for much of the social progress that would occur in the next decade.

In the audience was Northwestern SafeRide coordinator Bernard Foster. The Evanston Township High School alumnus was one of Barr’s childhood friends interviewed for the book.

“Growing up in Evanston was like growing up in our own world,” Foster told The Daily. “I didn’t experience a lot of the racism older people experienced until I moved away.”

Foster said he enjoyed the reading because he was able to listen to stories that he lived himself.