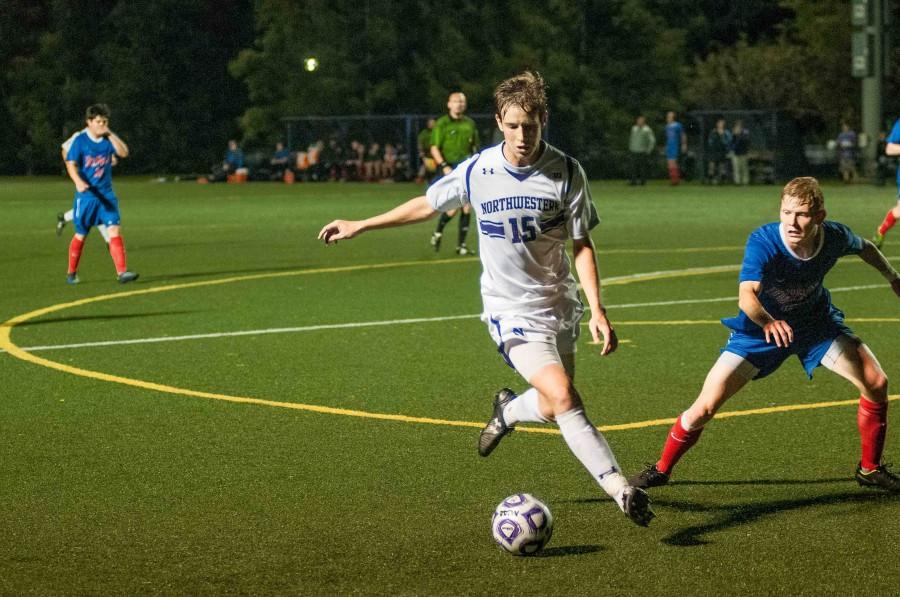 Cole Missimo works his way around a defender. The junior midfielder has used his fancy footwork to score a team-high 5 goals this season.

The name of the game for the two teams has been defense, with each team only conceding 7 goals in all of their matches this season for an average of less than 0.55 goals per game.

“They’re a very good team, a very veteran team,” coach Tim Lenahan said. “(The two programs are) very similar programs in how they approach things, we just want to be better at what we do.”

For NU, much of its offensive capability has come out of juniors midfielder Cole Missimo and forward Joey Calistri, with the two combining to score 9 goals and with Missimo at 4th place in the Big Ten in goals per game. But Lenahan said the rest of the team has also been making some good contributions and may yet still have an important impact.

Sophomore forward Mike Roberge, for example, picked up the game-sealing goal in the Wildcats’ most recent match against Rutgers.

“Now you’re trying to find down the stretch some guys stepping up and contributing,” Lenahan said. “When you have a good team, everyone has a moment to step up. … I still think there’s a couple of guys that still have a moment in them.”

From the Spartans, the formidable midfield pairing, described by Lenahan as “very athletic,” of juniors Jason Stacy and Jay Chapman has combined to tally 7 goals and 8 assists, with Stacy picking up 4 goals, 3 of them game-winning, and 6 assists. NU will look to shut them down and halt Michigan State’s good offensive capabilities in the first half. The Spartans have scored 8 of their 18 total goals in the first period of matches, while the Cats have scored just 3 of their 16 total goals in this same time frame.

But Lenahan was quick to not play up this particular match.

For instance, Michigan State is coming off of a 2-0 loss against unranked Oakland University on Wednesday, where the Spartans were outshot 14-9.

NU’s last match also had the same scoreline, but in favor of the Cats as they defeated conference rival Rutgers. The Cats will hope to capitalize on the momentum of that victory going into this match, to put themselves into a good position and seeding for the Big Ten Tournament.

If the last two games are any indication, fans are in for a good match of this growing conference rivalry despite the two teams’ defensive prowesses.