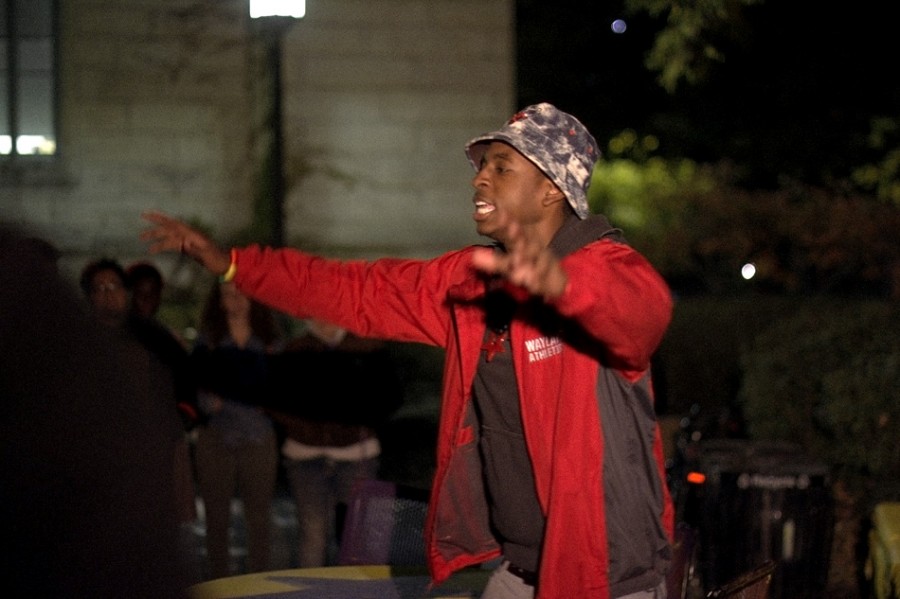 Student performer Prez Harris (McCormick sophomore Randall Harris) raps Wednesday night at The Rock as part of a demonstration to express anger over the shooting of an unarmed black teenager in Ferguson, Missouri in August. About 50 students attended the event, wearing red armbands and listening to student musical and spoken-word acts.

“You can’t stop the revolution,” Northwestern students chanted on Wednesday night as they gathered around The Rock in a demonstration against police brutality and racial profiling.

About 50 attendees wearing red armbands listened to student musical and spoken-word acts that denounced racism in America and the fatal August shooting of Michael Brown, an unarmed black teenager, by a white police officer in Ferguson, Missouri.

“(This event is) only for people that are mad as f—ing hell that black people keep dying,” organizer Sarah Oberholtzer said to the crowd.

Throughout the night, students expressed anger over the events in Ferguson, which have sparked weeks of protests and a federal investigation. They named other incidents of alleged racial profiling that led to the shooting deaths of unarmed black teenagers, such as Trayvon Martin and Renisha McBride.

“Why should I be scared?” McCormick sophomore Randall Harris rapped at the event. “Why should I feel like I shouldn’t be here?”

Later in the evening, students shared their own experiences with racism and painted The Rock, covering it in red handprints. They also circulated a petition asking the Chicago Police Department to decrease spending and answer civilian questions in the interest of transparency, among other demands.

Sam Dreessen, an activist who traveled to Missouri earlier this month with the Arab American Action Network to support local protesters, drew cheers and applause from the crowd as he criticized police tactics in the United States.

“Resistance is justified when people are occupied,” Dreessen said, leading the crowd in a chant.

Oberholtzer organized the gathering with For Members Only, NU’s black student alliance, and held it in conjunction with a National Day of Action Against Police Brutality organized by Ferguson October, a nationwide activist movement.

The Communication sophomore told The Daily that although the event, dubbed NU’s “Day of Resistance,” began on a grim note, she was glad to see participants stepping up to the microphone to speak about their own experiences.

“The idea was to empower the community and empower the people that are really angry right now,” Oberholtzer said. “People that are angry have their voices stifled and need to be as limited as possible, so it’s really awesome that people got a chance to scream and shout.”

Harris, who rapped under his stage name Prez Harris, said he was invited by FMO to perform.

“It just felt good to go up there and get it all out and see everybody reacting with me,” he said.

Harris called the crowd “tense” but noted moments of humor.

“It was tense in the way of, it needed to be, so you can realize how important this is,” he said.