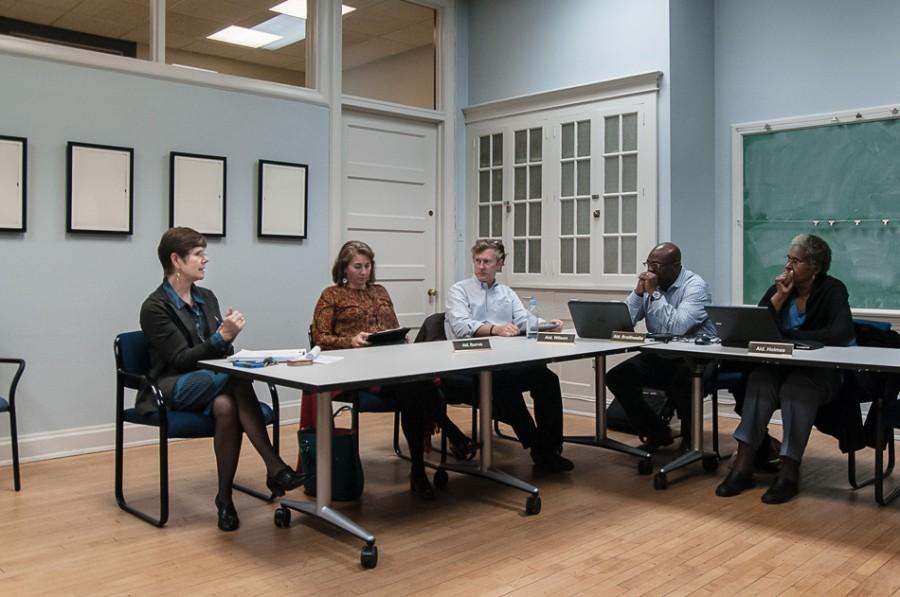 Aldermen and housing and grants administrator Sarah Flax discuss housing for low- to moderate-income residents. Evanston is applying to receive funding from the federal government to provide affordable housing for its residents.

Evanston is currently reviewing its draft of the 2015-2019 Consolidated Plan, a proposal addressing housing for low- to moderate-income residents.

The city invited residents to a meeting Tuesday evening at the Civic Center for public comment to evaluate their needs. The only people in attendance were aldermen and city officials.

The 2015-2019 plan aims to help with community and economic development needs and strategies as well as housing, specifically for low to moderate income residents, according to a city news release.

The plan ensures these low to moderate income residents have a suitable living environment and sufficient economic opportunities for the next four years, according to the release. Public comments on the plan may be sent to the city via email until Nov. 3.

The plan will be submitted to the U.S. Department of Housing and Urban Development by Nov. 15 for review, per the department’s recommendations. HUD also recommended that public comments close and the plan be approved at the Nov. 10 City Council meeting.

The plan is part of the funding  process for multiple grants, including the Community Development Block Grant, the HOME Investment Partnership and the Emergency Shelter Grant programs, which will receive funds through federal grants if the plan is approved. CDBG seeks to improve public facilities and infrastructure and HOME helps families with children pay rent. ESG addresses the needs of individuals at high risk of homelessness, including victims of domestic violence.

The plan guarantees fair housing for all low- to moderate-income residents in Evanston as part of these federal grant fundings, according to the release. The city previously implemented a 2010-2014 Consolidated Plan.

Residents can review the draft online or at the Civic Center through Nov. 3.

“We have such limited citizen participation,” said Ald. Coleen Burrus (9th). “So much of it dovetails what the mental health board is doing.”

The city previously tried to reach out to the public through an online survey, which they promoted through social media, emails, the website and newsletter, the plan said. According to the plan, residents’ responses doubled from the last plan. The city received about 200 to 250 responses from residents, said Sarah Flax, the city’s housing and grants administrator.

“Nationally, we blew most other cities out of the water,” Jacobs said at the meeting.