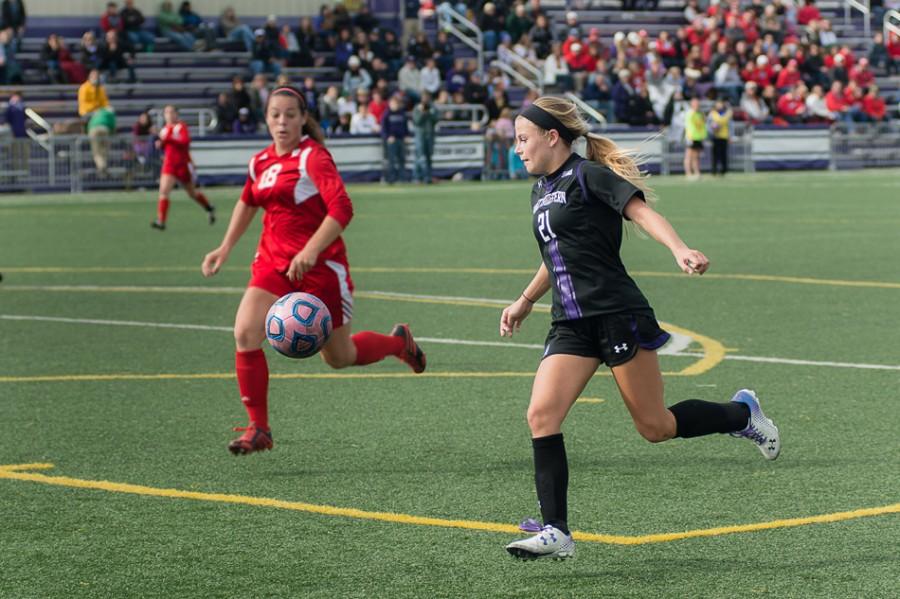 Sophomore Addie Steiner drilled the game-winning goal Sunday in the 97th minute of Northwestern’s 1-0 overtime victory over No. 14 Rutgers. The win lifted the Wildcats to 6-7-3, 2-6-2 in the Big Ten and kept their conference tournament hopes alive.

The Wildcats have shown multiple times they can kick it with the big kids. On Sunday, they proved it with a win over No. 14 Rutgers.

Sophomore Addie Steiner added to her growing list of memorable goals, netting her fourth game-winning goal of the season and upping her season total to a team-leading nine.

Although much attention is sure to go to the spectacular finish, the Northwestern defense spearheaded the strong weekend, which also included a tie against Maryland.

“The defense has really been improving quite a bit over the course of the season,” coach Michael Moynihan said. “Kassidy [Gorman] stepped in as a freshman and contributing right from the start and she’s been great. The other freshmen have also picked it up quite a bit, especially Nikia Smith. She’s got great pace and athleticism, and her confidence is growing.”

“The five of them together have really been difficult to break down, shutting down a lot of really potent attacks of other teams,” he said.

On Friday, this was apparent against Maryland, as the defense allowed only seven shots on goal, all of which were turned back by freshman goalie Lauren Clem.

“Lauren’s doing quite well in goal as well, quite a few games where she hasn’t been tested a whole lot, but when she is called on, she really steps up,” Moynihan said. “This weekend she had one really nice save against Maryland, defended the crosses really well, and then against Rutgers there was a stretch toward the end of the game where she was tested quite a bit. And she did very well.”

According to Moynihan, not much was different in the last two games in terms of how well the team played overall.

“I’d say the team’s played well all season. We outshot Wisconsin, we outplayed Iowa, we outplayed Purdue,” Moynihan said. “It’s not always a matter of how well you play, it’s achieving results.”

The Wildcats were finally able to get the results they wanted against Rutgers, due in large part to clutch play on both sides of the ball. In the 94th minute, a flip throw-in led to a collision between Alyinovich and a Scarlet Knight player. A penalty kick ensued, and the Cats found themselves on the brink of another heartbreaking result.

But Lauren Clem came up huge, tipping a lower corner shot off the post and out of harm’s way.

Just three minutes later, the offense returned the favor. Off of a goal kick from Clem, freshman Michelle Manning received the ball, held off a defender and made a lob pass toward the Rutgers net. Steiner beat the Scarlet Knight goalie to the ball and lofted a shot over the keeper and into the net.

“We didn’t make the mistakes we’ve made in some of the others, and we finished our chance,” Moynihan said. “We had more chances than them, but quite frankly, we hit the one that mattered.”

With three home games left in the season, the Cats are still mathematically in the hunt for a Big Ten playoff spot. And according to Moynihan, it’s still the team’s number one goal.

“We know we have some difficult games,” Moynihan said. “Michigan comes into the game ranked 24th, but we’ve already beaten three teams that were ranked higher than that. So it’s certainly an achievable task. We’ll just take it one game at a time.”