Football: Wildcats collapse after halftime on both sides of the ball 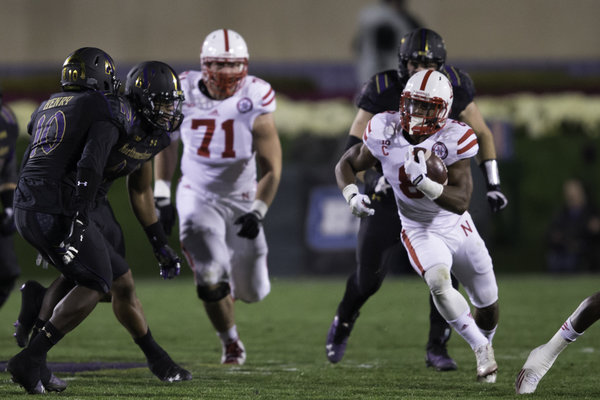 Nebraska running back Ameer Abdullah carries for several of his 107 second-half yards in Saturday's win over Northwestern. Abdullah and the Cornhuskers outscored the Wildcats 24-0 after halftime and outgained NU in yards 244-28.

Just before halftime, with the score tied, Northwestern broke a pair of big plays to find itself with a first down at the Nebraska 13-yard line.

But after two incompletions and a short rush, the Wildcats settled for a field goal to take a 17-14 halftime lead.

With NU’s offense unproductive and its defense unable to get off the field, Nebraska outscored the Cats 24-0 in the second half on the way to a 38-17 blowout.

“Obviously a tale of two halves,” coach Pat Fitzgerald said afterward. “They quite frankly just shut us down offensive in the second half, which put our defense in a tough situation. They were out there way too long against an explosive offense.”

The Cats’ offense disappeared, and a gassed defense couldn’t stop Cornhuskers running back Ameer Abdullah. After only 39 rushing yards before the break, Abdullah exploded for 107 after halftime, when Nebraska outgained NU 244-28.

“If we had tackled better, took better angles, we would’ve gotten him down,” junior defensive end Dean Lowry said. “But he’s a great player, and we’ve got to improve from here.”

After freshman running back Justin Jackson rushed for 99 yards in the first half, Nebraska loaded the box in the second, forcing NU to throw. Jackson carried only seven times for 29 yards after halftime, putting the onus on senior quarterback Trevor Siemian to power the offense.

But with his offensive line collapsing around him, Siemian completed only five passes in the second half.

“Defensively, they were going to put everybody in the box to stop our run,” Fitzgerald said. “At that point now we needed to be able to throw the ball, and we were unsuccessful with that from a consistency standpoint to be able to sustain drives.”

Fitzgerald said Siemian, who suffered an ankle injury last month, isn’t “anywhere close to 100 percent” health. The senior overthrew several receivers but also suffered from a lack of time to pass against the Nebraska pass rush, especially after the break.

Fitzgerald attributed the passing game’s second-half struggles to more than just his quarterback.

“It looked like we had some one-on-one match-ups up front, we had some drops,” Fitzgerald said. “It’s a combination of all 12 of us, the coaches and the 11 guys on the field.”